Buy Photo
A mother and son visit the newly opened Center for Memory and Dialogue in Kabul on Feb. 27, 2019. The Center honors the memory of Afghans killed during the past four decades of violence in the country. (Phillip Walter Wellman/Stars and Stripes)

Buy Photo
A mother and son visit the newly opened Center for Memory and Dialogue in Kabul on Feb. 27, 2019. The Center honors the memory of Afghans killed during the past four decades of violence in the country. (Phillip Walter Wellman/Stars and Stripes) 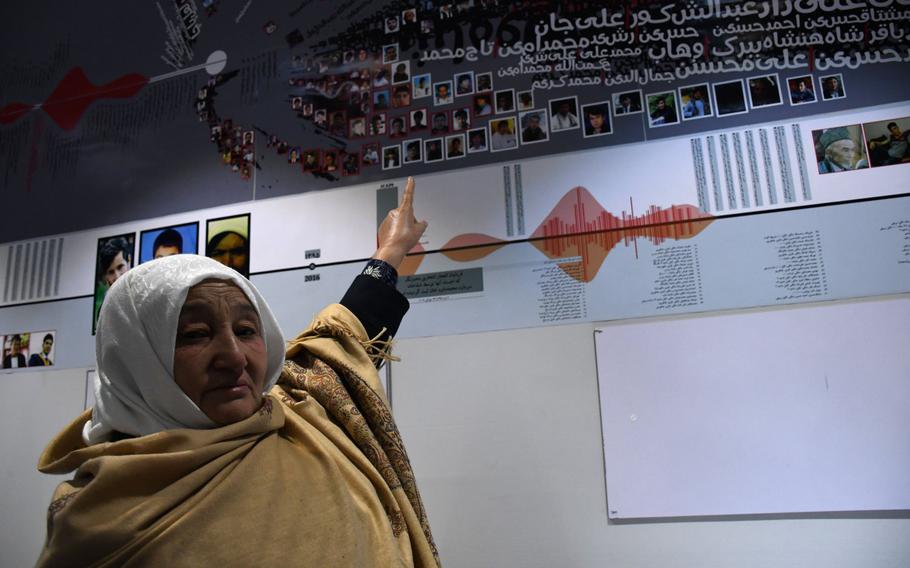 Buy Photo
Sima Dawlatshahi on Feb. 20, 2019, points to a photo of her son who was killed in a 2016 suicide blast. The photo adorns a wall of the Center for Memory and Dialogue in Kabul, which opened in February to pay tribute to Afghan killed during the past four decades of conflict that have plagued the country. (Phillip Walter Wellman/Stars and Stripes) 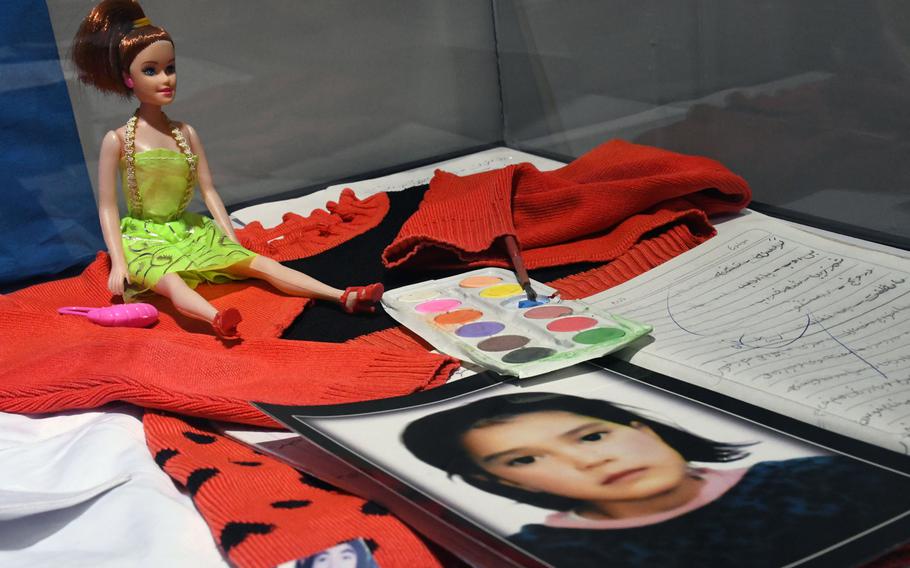 Buy Photo
The memory box of a young Afghan War victim includes a doll she played with before she was killed. The box was on display at the Center for Memory and Dialogue in Kabul on Feb. 20, 2019. (Phillip Walter Wellman/Stars and Stripes) 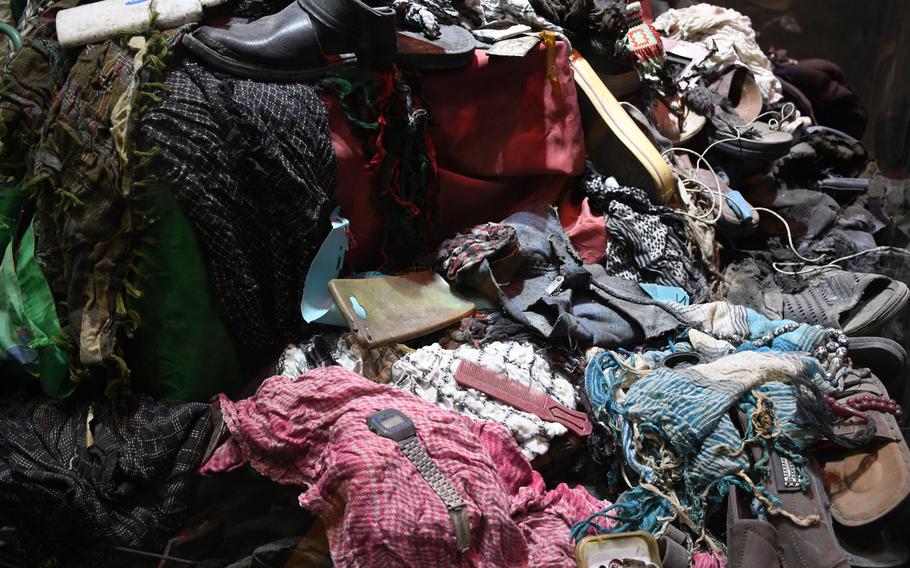 Buy Photo
Items that belonged to Afghans killed by suicide bombings and collected at various blast sites are displayed at the Center for Memory and Dialogue in Kabul on Feb. 20, 2019. (Phillip Walter Wellman/Stars and Stripes) Buy Photo
A memory box at the Center for Memory and Dialogue in Kabul on Feb. 20,2019, displays items that reflect the life of an Afghan killed by violence in the country. (Phillip Walter Wellman/Stars and Stripes) Buy Photo
A visitor to the Center for Memory and Dialogue in Kabul on Feb. 27, 2019, reads the stories of Afghans killed during the past four decades of conflict in the country. (Phillip Walter Wellman/Stars and Stripes) Buy Photo
Afghans attend a discussion at the Center for Memory and Dialogue in Kabul on Feb. 27, 2019. A number of human rights issues related to Afghanistan's ongoing conflict were discussed at the meeting. (Phillip Walter Wellman/Stars and Stripes)

KABUL, Afghanistan — It’s been about 40 years since government forces stormed Sima Dawlatshahi’s home in the Afghan capital and took her husband away forever.

The forced disappearance was part of an initial bout of violence that has continued ever since, killing millions across the country. Among the dead is Dawlatshahi’s son, who died in a 2016 suicide blast and whose photo adorns a wall of a new museum designed to play a unique role in fostering a long-sought reconciliation and bringing peace to the nation of 32 million.

The Center for Memory and Dialogue opened last month amid ongoing talks between American and Taliban officials that have sparked hopes of a cease-fire in the 17-year war. But directors say in order for any peace to last, wounds from the past must be healed, which the center is helping achieve.

“This place reminds us of the memories of our loved ones, it’s more important to me than my life,” Dawlatshahi said standing next to the photo of her son. “I think it can help bring peace.”

The museum documents bloodshed that began during Afghanistan’s communist regime in the late 1970s — which was marked by disappearances and killings like that of Dawlatshahi’s husband — and goes on to cover deaths caused during the Soviet occupation of the 1980s, the subsequent civil war, the Taliban’s brief reign and the current period that started when American forces invaded to overthrow the hardline regime in 2001, beginning America’s longest war.

Glass “memory boxes” throughout the museum display victims’ personal items and biographies written by family members. One box, commemorating a young girl, holds a doll and watercolor paints. Others include jewelry, hand-written letters and various other objects.

“His death took our happiness away,” reads a biography written by the wife of Sayed Abedin, a driver killed by a suicide attack in Kabul in 2018. “I only pray to God to do justice and punish (the culprits) for their crimes.”

Organizers say the contents of the memory boxes will change regularly to feature different victims. There are plans to exhibit them at other venues throughout the country. In addition to the shifting collection of memorabilia, the center in Kabul will host regular discussions to help the public come to terms with loss.

“Ultimately, we are hoping that by providing this space for discussion and dialogue, we will overcome and go beyond this bloodshed and violence and have a peaceful Afghanistan where everybody can live in peace and in dignity,” said Hadi Marifat, executive director of the Afghanistan Human Rights and Democracy Organization, which developed the center.

Many Afghans have told the organization they’re ready to forgive upon receiving an apology, if nothing else is possible, Hadi said.

“Forgiveness is one thing, but we will not forget what happened,” Hadi said. “The issues of forgiveness and to forget are two different things.”

More than 2 million Afghan civilians are estimated to have been killed from 1978 to 2001. More than 32,000 others lost their lives since 2009, when systematic documentation began, the United Nations said in a report last month. The report named 2018 the deadliest year for Afghan civilians and expressed concerns over a growing number of casualties caused by suicide bombings and U.S. and Afghan airstrikes.

The Center for Memory and Dialogue is unique in Afghanistan. Before it opened, there was no formal policy to remember those who lost their lives during the past four decades of conflict, its directors said.

“A center like this was badly needed,” said Fatima Alavi, an associate at the center. “When we bring family members of the victims here to talk, they have pain in their hearts. They have a hatred of whatever happened, so they can come over, share their stories with others, listen to other stories and see that they are not the only victims — all Afghans are the victims of these wars.”

During a recent discussion led by three human rights experts at the center, a member of the audience asked how families of the dead would receive justice — highlighting the fact that for some, healing will depend on perpetrators being punished and not just having their slain loved ones honored at a museum.

Few efforts have been made to address past crimes and bring to justice those responsible for civilian deaths in Afghanistan’s four decades of war.

In 2017, the International Criminal Court’s chief prosecutor Fatou Bensouda lodged a request to investigate alleged war crimes committed by the Taliban, the Afghan government and U.S. troops and Central Intelligence Agency operatives in Afghanistan. The U.S., which never ratified the treaty establishing the ICC, has said it will not cooperate “in any way” with the investigation.

Today, the focus in Afghanistan is on talks between U.S. and Taliban negotiators taking place in Qatar, the highest-level negotiations between the two sides since concerted peace efforts began last year. If the talks are successful and a ceasefire is eventually established, the longing among Afghans for justice is unlikely to dissipate.

The evidence collected by the Center for Memory and Dialogue could help in future cases against those accused of killing Afghan civilians, said Mohammad Hussain Saramad of the Afghanistan Human Rights and Democracy Organization.

“We’ll try to get more stories and more memories as evidence about the victims,” Saramad said. “We hope that by evaluating such material, we’ll be able to bring clarity to violent incidences.”