New museum at Quantico does justice to Marine Corps' history The mast of the National Museum of the Marine Corps reminds the viewer of the World War II flag raising on Iwo Jima. (Joe Gromelski / S&S)

The mast of the National Museum of the Marine Corps reminds the viewer of the World War II flag raising on Iwo Jima. (Joe Gromelski / S&S) 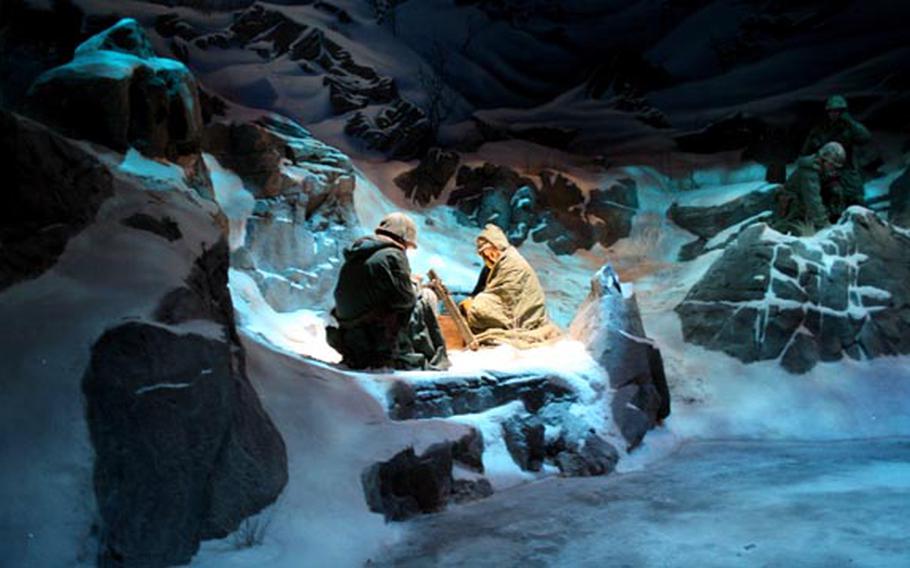 One of the many recreations in the museum depicts the harsh conditions Marines faced during the Korean war. (Joe Gromelski / S&S) 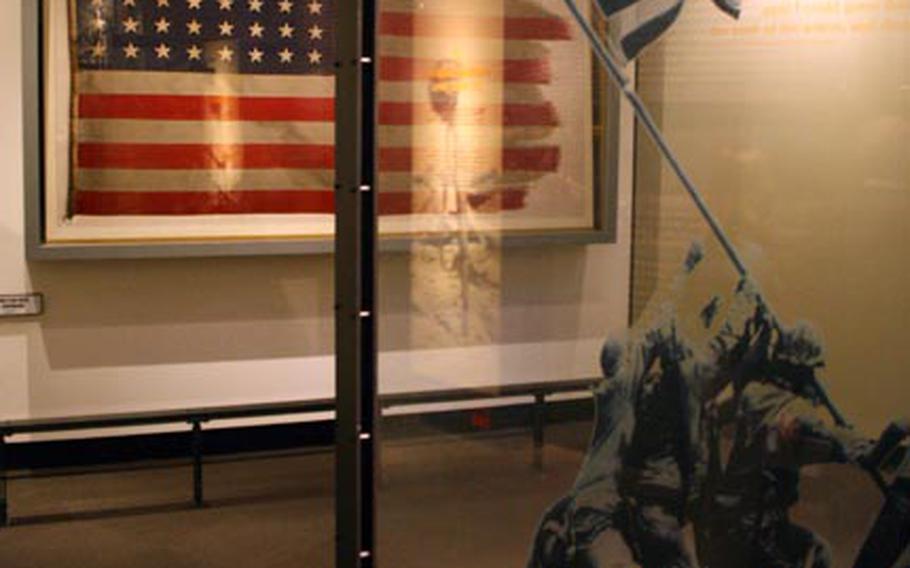 Among the many artifacts in the museum is the famed flag that was raised over Mt. Suribachi on Iwo Jima. (Joe Gromelski / S&S) A familiar phrase is reflected in a display case. (Joe Gromelski / S&S) The inside of the museum features aircraft suspended in the Leatherneck Gallery. (Joe Gromelski / S&S)

From the halls of Saddam&#8217;s palaces to the shores of Tarawa, Marine Corps history comes into sharp focus at the service&#8217;s new museum.

It starts in the soaring atrium of Leatherneck Gallery and continues through the life-size depictions of the battles of Iwo Jima, Chosin Reservoir and Hill 881 South &#8212; and undoubtedly will end for many Marines at the bar fashioned to look like the Tun Tavern, where the Corps was born Nov. 10, 1775.

The National Museum of the Marine Corps &#8212; dedicated Friday and opening to the public on Monday &#8212; is the result of a $100 million effort to give artifacts related to the Corps&#8217; history a suitable home.

Visitors first notice the angled glass-and-steel atrium rising over the trees near the Marine Corps Base in Quantico, Va. Its profile evokes images of the raising of the flag atop Mount Suribachi on Iwo Jima.

Beneath the atrium is Leatherneck Gallery, the first stop for visitors. It contains Marine aircraft from the early days of flight to a modern AV-8 Harrier jump jet. Its circular wall bears quotes from and about Marines, as well as immense portraits of typical leathernecks. Below are full-size depictions of the landing at the Pacific island of Tarawa during World War II and a helicopter assault in Korea. The mannequins are impressively lifelike.

In a small theater off the gallery, visitors can watch a stirring 13-minute film about the Corps. The gallery and film immediately establish that this is a museum covering proud and dedicated warriors making tremendous sacrifices &#8212; and is probably an effective recruiting tool.

Director Lin Ezell said the museum was designed to tell the story of the average Marine throughout history and to engage visitors of all ages and interest levels. As a result, there&#8217;s plenty to read, see, hear, touch and experience.

The museum&#8217;s largest display areas cover World War II, Korea and Vietnam. Other exhibit areas include Making Marines, combat art and the war on terror, which is currently covered in a photo exhibit. These areas are connected by Legacy Walk, which incorporates an artifact-studded timeline and special displays on the Corps&#8217; early history, World War I and other eras.

Most visitors will start with Making Marines, an entertaining and enlightening view of boot camp. Visitors can try lifting a 90-pound pack, take an electronic quiz about an obstacle course or stand in a special booth to listen to &#8220;instruction&#8221; from a drill instructor. Elsewhere, they can shoot a laser-simulated M-16 or guide a Joint Strike Fighter simulator &#8212; each for $5. Aside from these two activities, the museum is free.

Legacy Walk is for people who like context and interesting artifacts. Amid the timeline of important events, visitors will find Sgt. Maj. Daniel Daly&#8217;s two Medals of Honor; Capt. Lemuel Shepherd&#8217;s brandy flask; glass melted by the atomic bomb at Nagasaki, Japan; and a computer mouse plucked from the rubble at the Pentagon after Sept. 11, 2001.

The World War II exhibit is likely to be the most popular. It effectively uses newsreels, artifacts, recordings of veterans and a walk-through depiction of the battle of Iwo Jima to bring the enormous conflict down to a personal level. Among the artifacts is the original flag captured in the photograph of the five Marines and Navy corpsman atop Mount Suribachi, an especially timely exhibit considering that Clint Eastwood&#8217;s film &#8220;Flags of Our Fathers&#8221; is still in theaters.

The museum uses similar techniques to explore the Corps&#8217; role in Korea and Vietnam. The most impressive exhibits in these areas are the walk-through exhibits depicting Korea&#8217;s frozen Chosin Reservoir and Vietnam&#8217;s Hill 881 South. Both areas include displays covering prisoners of war and end with an account of the Corps&#8217; casualties &#8212; somber reminders of war&#8217;s cost.

For a museum designed to portray the experience and deeds of the average Marine, it does an excellent job of highlighting the service&#8217;s superlatives and explaining its dedication to honor, courage and commitment.

Future: The current museum is only half the envisioned project. In the coming years, the Marine Corps Heritage Foundation will raise funds to expand the museum from 118,000 square feet to nearly 181,000 square feet, which will provide fuller coverage of the Revolution through World War I. The museum will be the centerpiece of the Marine Corps Heritage Center, which will include a memorial park, parade grounds, conference center and research center.