New motorcycle rule does not reach all airmen 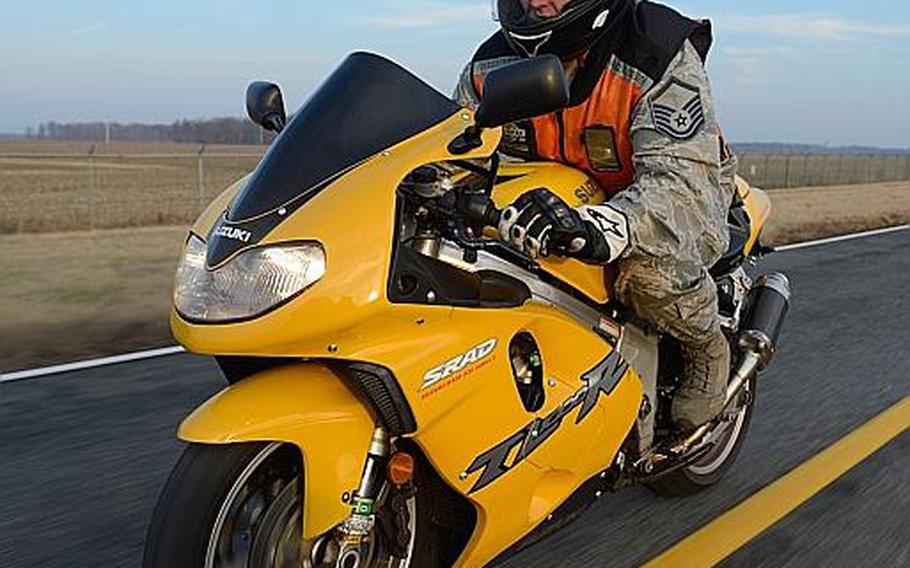 As of September, the Air Force no longer requires that airmen wear a high visibility clothing, such as the orange vest worn by Master Sgt. John Willard Jr. while riding at Dover Air Force Base, Del., Tuesday, Jan. 29, 2013. Individual commands, however, still have the power to require airmen to wear reflective clothing. Greg L. Davis/U.S. Air Force (U.S. Air Force)

As of September, the Air Force no longer requires that airmen wear a high visibility clothing, such as the orange vest worn by Master Sgt. John Willard Jr. while riding at Dover Air Force Base, Del., Tuesday, Jan. 29, 2013. Individual commands, however, still have the power to require airmen to wear reflective clothing. Greg L. Davis/U.S. Air Force (U.S. Air Force) RAF MILDENHALL, England — The Air Force recently relaxed the personal protective equipment requirement for motorcycle riders, but the new freedom has not filtered down to all airmen.

Air Force regulations changed in September to allow airmen to ride a motorcycle without wearing high visibility personal protective equipment. They instead encourage airmen to wear clothing that makes them more visible to other motorists.

But commanders retain the ability to add rules to the instruction, said Chief Master Sgt. Dave Martin, chief of ground safety for USAFE-AFAFRICA. USAFE-AFAFRICA officials are using that latitude to continue enforcing their 2012 supplement to the motorcycle rules, which requires motorcyclists under their command to wear “high visibility colors” during the day and “retro-reflective” gear at night.

“Being visible on a motorcycle prevents accidents, and we urge every rider to be conspicuous day and night,” Martin wrote in an email.

Research conducted by the Air Force Safety Center, however, found other factors were behind many motorcycle fatalities. Center officials conducted research going back 10 years and determined that in 45 fatal incidents involving a car and motorcycle, 39 of the motorcycle riders, or 87 percent, were wearing reflective gear.

“Although brightly color clothing is an important factor for other drivers to see the motorcyclist, it was evident that in the specific cases where those 39 riders were wearing their brightly colored clothing, it did not prevent their unfortunate deaths,” center officials wrote in an email.

The majority of motorcycle “mishaps were a result of inexperience which included speed, curve in roadway and riding beyond their skill level.”

Center officials said they removed the rule requiring high-visibility gear in order to “standardize motorcycle requirements within the Department of Defense.”

If USAFE-AFAFRICA does change its regulations, not all riders may take advantage of the liberty. Senior Master Sgt. Christopher Ostrom, stationed at RAF Lakenheath, England, said he has become used to the Air Force motorcycle requirements.

“Where I grew up, there was no helmet law, so I didn’t wear a helmet until I joined the Air Force,” said Ostrom, who is also a member of the Green Knights, a military motorcycle group. “Now I wouldn’t go anywhere on my motorcycle without a helmet. My reflective gear has just become part of the way I buy gear now.”

The new Air Force regulations and the lack of change on USAFE-AFAFRICA’s part created some confusion in England. A spokesman for the 501st Combat Support Wing, headquartered at RAF Alconbury, wrote in an Oct. 23 email to Stars and Stripes that airmen were no longer required to wear reflective gear while riding a motorcycle.

After being asked about the wing’s different rules, a USAFE official said Wednesday a review “determined that RAF Alconbury will enforce the requirement for reflective clothing in accordance with the most current (regulations) and command supplements.”

The 501st spokesman said the safety office mistakenly believed the USAFE supplement was no longer in force.

USAFE-AFAFRICA is in the process of reviewing its safety requirements and will release a new supplement next spring, a spokesman said.