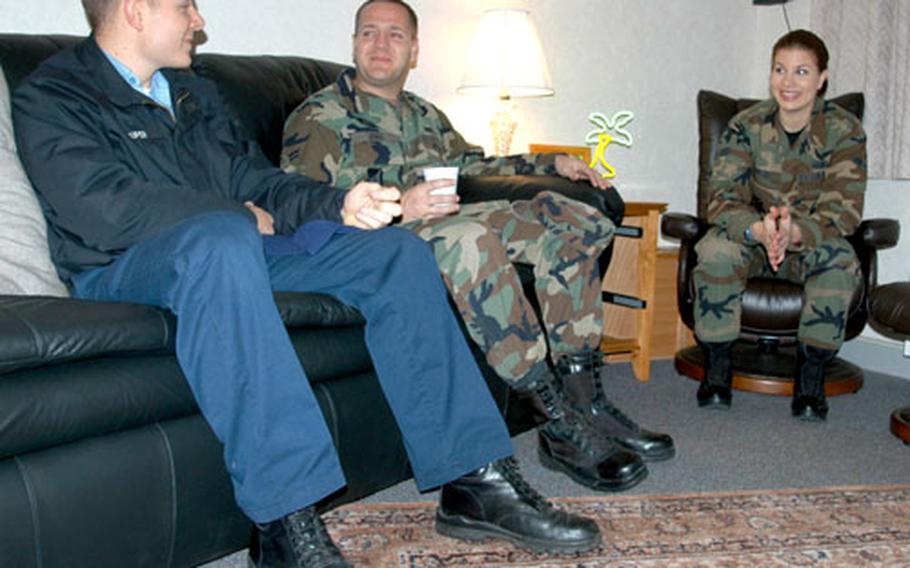 MISAWA AIR BASE, Japan &#8212; The flock at the Four Chaplains Warfighter Center of Excellence is growing.

Since opening in August, the center has drawn about 40 people on a regular basis, according to Chaplain Capt. Matthew Boarts.

But while many come for the Wednesday night Bible study, any single U.S. military member at Misawa is welcome, regardless of his or her religious beliefs, say those who drop in often at the center.

&#8220;Religion is our cornerstone, but we&#8217;ve had agnostic people come in,&#8221; said Seaman Kenneth Kiper, 22, an analyst with U.S. Navy Information Operations Command at Misawa.

A ribbon-cutting last week officially opened the center. Airmen and sailors afterward relaxed on sofas in a cozy room where a large television screen was the centerpiece.

That was the impetus for the center &#8212; getting military singles away from the isolation of the dorms and giving them an alternative to the bars.

But reading scriptures together isn&#8217;t the only social activity.

The group has gone camping and explored sites in northern Japan. A discussion on race relations followed a recent screening of the movie &#8220;Crash.&#8221; Events in December will include a chili cook-off, decorating the chapel sanctuary and a cultural exchange with on-base sixth-graders.

That emphasis on character development sets the center apart from similar efforts across the Air Force, according to one Pacific Air Forces official.

The Air Force Chaplain Service is opening the centers &#8220;especially for airmen who reside in dorms, to provide a &#8216;home-like&#8217; atmosphere with wholesome entertainment options,&#8221; according to a news release from Balad Air Base, Iraq, where one opened in May.

Wachter said several PACAF bases already have the centers, including Eielson Air Force Base, Alaska, which opened a coffeehouse ministry in a renovated dormitory basement. The centers usually have video games and coffee bars, he said.

Airman 1st Class Caley Hayes, 20, has been part of the center since its beginning.

Center hoursThe Four Chaplains Warfighter Center of Excellence is open 10 a.m. to 2 p.m. Monday, Wednesday and Friday and 5:30 to 9 on Wednesday evenings.

Regular events are scheduled for Friday and Saturday nights, with hours to be expanding soon, base officials said.

The center shares a building with the American Red Cross, a short walk from the dormitories.