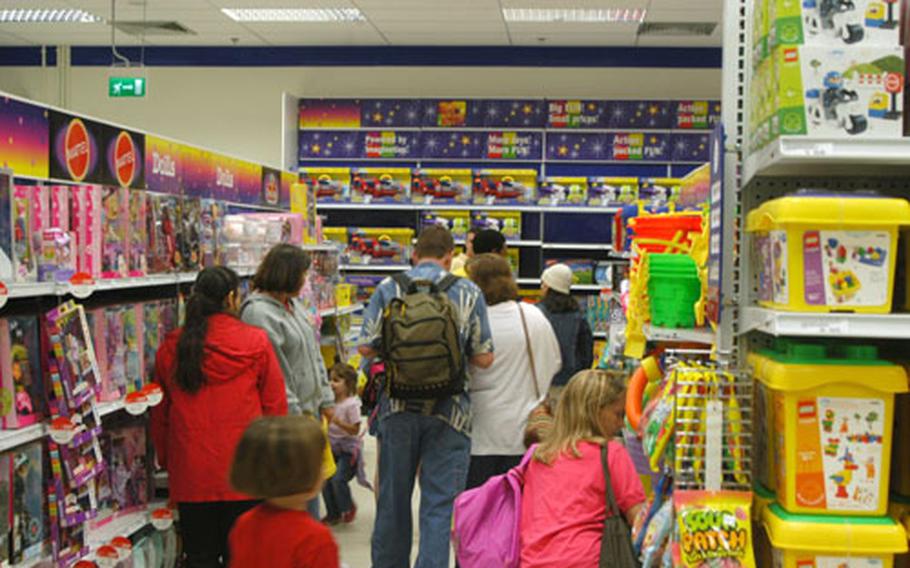 The end of May looked a little like the middle of December at the Friday debut of the AAFES mini-mall at Aviano Air Base. Shoppers checked out merchandise that hadn&#39;t been available, including some of the toys in this section. But many said they&#39;re especially looking forward to the debut of the base&#39;s first Subway sandwich shop in a few weeks. (Kent Harris / S&S)

The Army and Air Force Exchange Service debuted its mini-mall at Aviano on Friday, as hundreds of shoppers re-entered a building that&#8217;s been vacant for several years. The facility, located adjacent to the bowling alley on Area 1, was formerly the base&#8217;s main exchange. It shut down in 2000 as a newer, larger facility opened on the flight line area across town.

Paula Gunderson, the AAFES general manager for Italy, said there&#8217;s more room for just about all operations than there was at previous locations.

For instance, the shoppette now has 21,000 square feet of space, compared with 9,000 before. Some of the extra space is devoted to an expanded video rental and sales department.

The extra space also allows the furniture store to show customers more of what AAFES has to offer.

Michelle Marsalek said that was one of the first things she noticed. She said it would be good to not have to purchase something, then pick it up at a nearby warehouse to get a look at it.

Senior Airman Damian Brown said it was good to see several different operations all under one roof.

The buildings that housed the shoppette, furniture store and military clothing operations &#8212; located the equivalent of a few city blocks away &#8212; will soon be razed to create more parking for the medical facility.

Parking in front of the mini-mall appears to be at a premium now. So customers will have to get used to parking in the gravel lot behind the complex. Gunderson said there&#8217;s more work that needs to be done.

But she praised the work of project manager Serban Schoen and shoppette manager Margie Reynolds in getting the facility open a few months ahead of schedule.

Store hours are generally the same as they were before, with the consolidated shoppette/4 Seasons open 24 hours a day on Fridays and Saturdays. So those desperate for a couch at 3 a.m. on Saturday now have an option they probably don&#8217;t have anywhere else in the country.