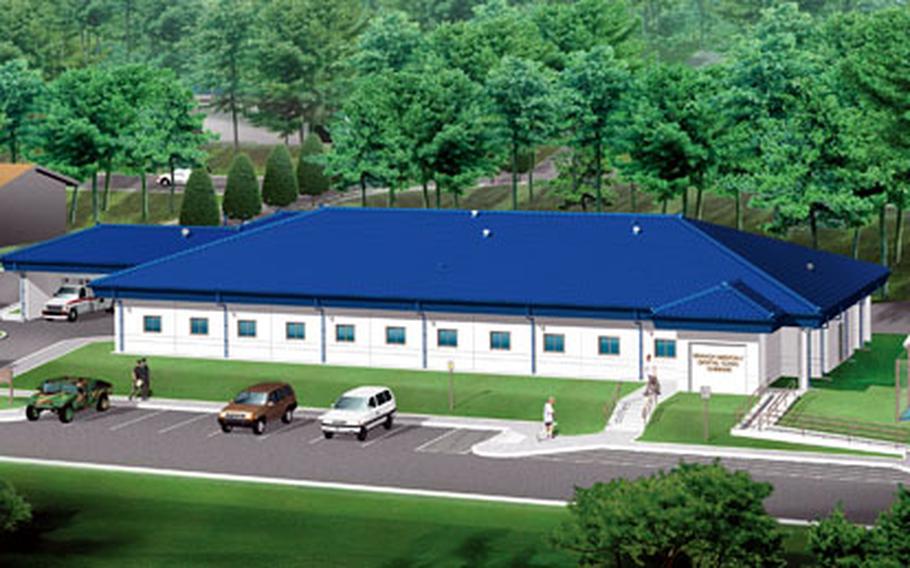 An artist’s rendering depicts the new medical clinic planned for Chinhae Naval Base, South Korea. The clinic, to open in March 2006, will be twice the size of the existing clinic and will have updated medical equipment. (Courtesy of U.S. Army Corps of Engineers)

PYONGTAEK, South Korea &#8212; Workers at Chinhae Naval Base in South Korea soon are to build a new medical clinic more than twice the existing one&#8217;s size and fitted with the latest medical equipment.

The clinic is to open in March 2006. Construction is to start sometime late this month or in early January.

Chinhae&#8217;s existing clinic is a 45-year-old structure that first served as a supply building. It has no conference room. Its two ambulances were sent to Chinhae in 1991 from Subic Bay, Philippines, after the U.S. Navy closed its base there, said the clinic&#8217;s Chief Petty Officer Glenn Fabros.

Its exam rooms are small and much of its equipment is outdated.

Workers will tear down the existing clinic and build the new one on the same site, Bergado said.

Base medical staff have moved out of the clinic building and into a one-story, two-family house that base officials converted for use as an interim clinic.

Chinhae Naval Base in southeastern South Korea is an 86-acre support base with a population of about 380 people, 150 of them servicemembers. About 135 are Korean employees. Base staff assist visiting U.S. Navy crews with logistics and administration.

&#8220;The clinic that we&#8217;ve had here &#8230; is actually just a converted old supply office, so it&#8217;ll be nice to actually have a facility that is built for the purpose of a medical facility,&#8221; said Petty Officer 1st Class William Hayden, a preventive medicine technician.

&#8220;With more space and new equipment, we won&#8217;t have to send patients to some of the other medical facilities,&#8221; like the medical clinic at Camp Walker in Taegu or the 121 General Hospital on Yongsan Garrison in Seoul, Hayden said.

Petty Officer 1st Class Michael Walls, an independent duty corpsman at the clinic, said the new X-ray machines are especially good news. &#8220;Like, a lot of time, our old X-ray machine was broken and we&#8217;d have to send the active-duty patients&#8221; to a nearby Korean military hospital, &#8220;and we&#8217;d have to send the dependents out on town to get X-rays.