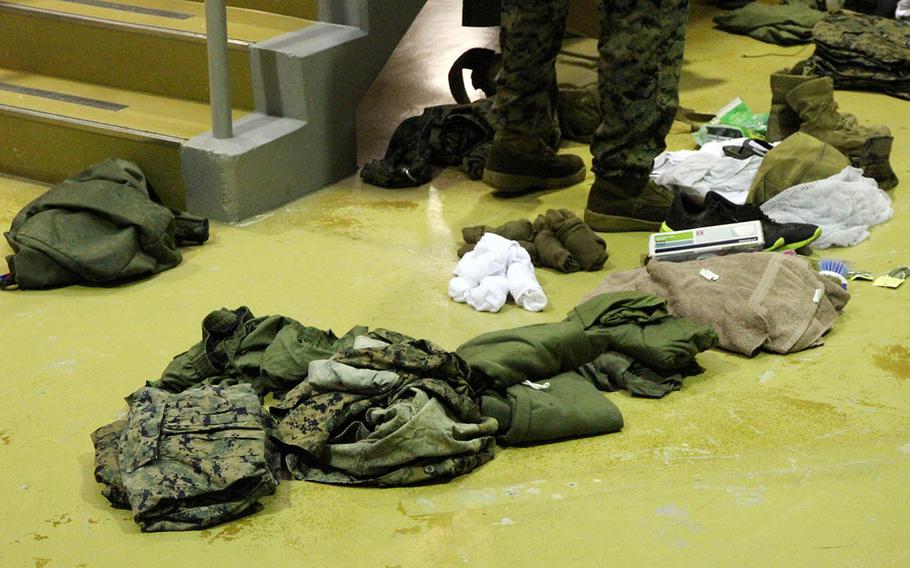 Buy Photo
Marines empty the contents of their sea bags at the Camp Hansen brig as they arrive for the Correctional Custody Unit 2.0 program in August. (Matt Burke/Stars and Stripes)

Buy Photo
Marines empty the contents of their sea bags at the Camp Hansen brig as they arrive for the Correctional Custody Unit 2.0 program in August. (Matt Burke/Stars and Stripes) 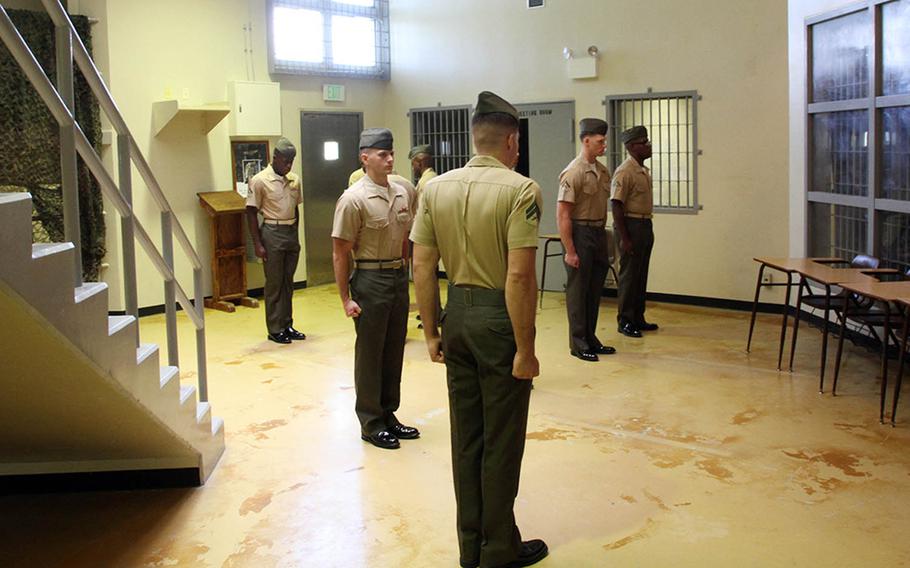 Buy Photo
Marines from a Correctional Custody Unit class stand at attention for a uniform inspection at the brig on Camp Hansen, Okinawa, Aug. 31, 2018. (Matt Burke/Stars and Stripes) 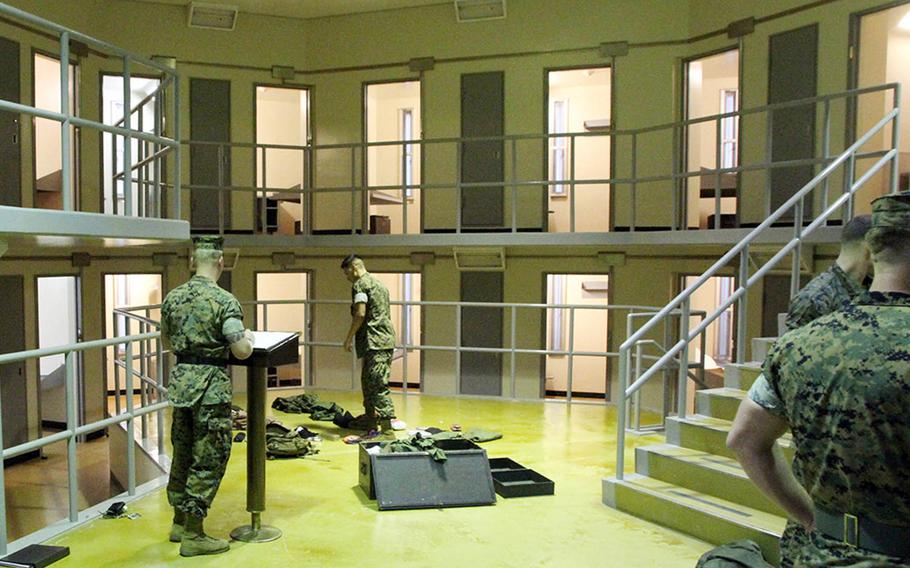 Buy Photo
Marines pack their foot lockers at the Camp Hansen brig after arriving for the Correctional Custody Unit program in August. (Matt Burke/Stars and Stripes) 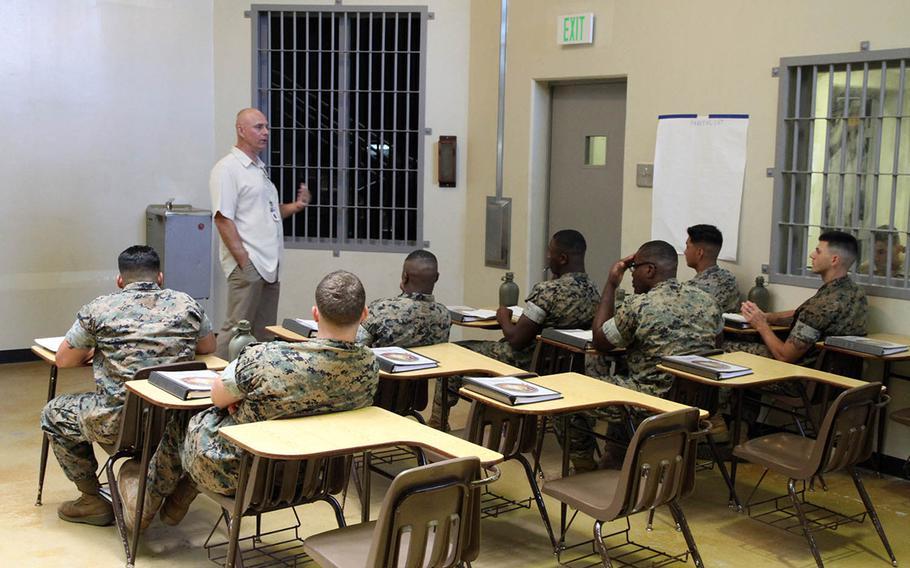 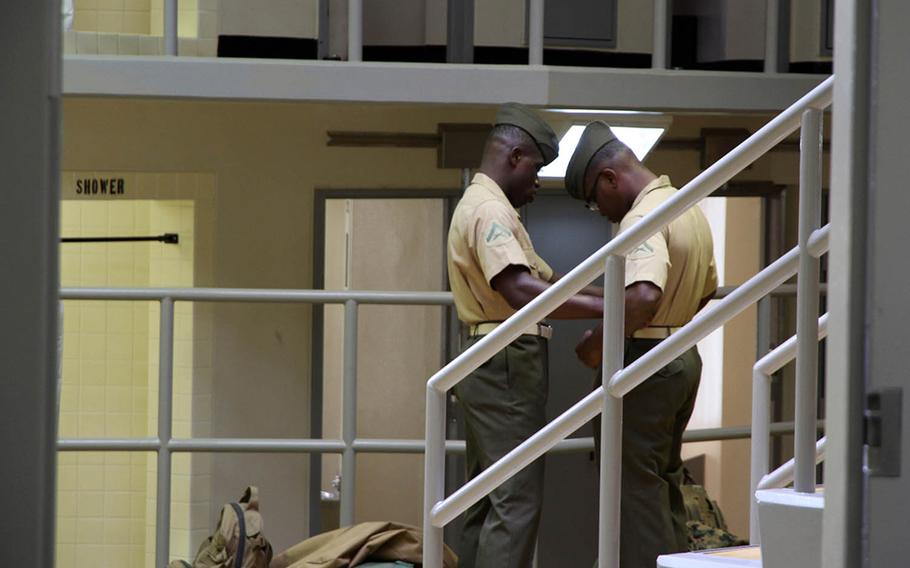 Buy Photo
A Marine helps another prepare for a uniform inspection during the Correctional Custody Unit program in August at Camp Hansen, Okinawa. (Matt Burke/Stars and Stripes) 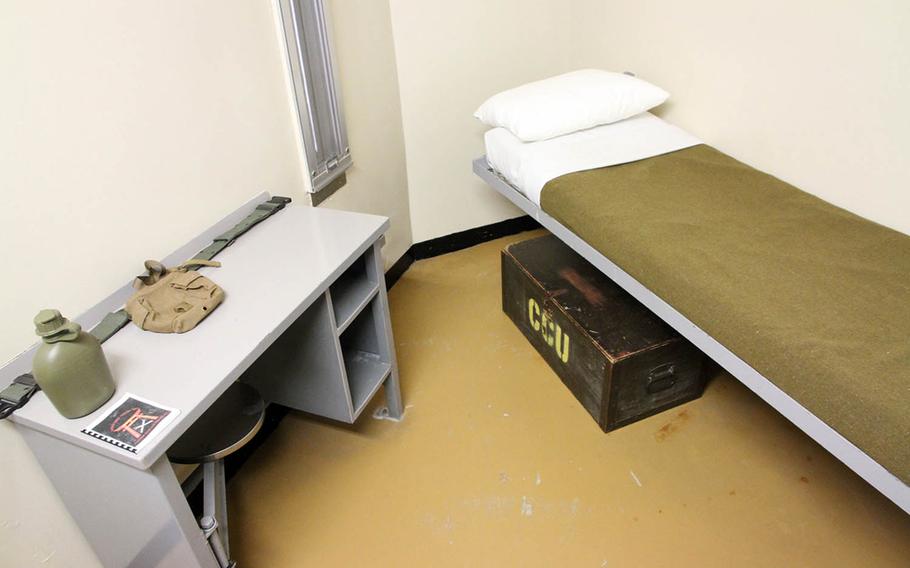 Buy Photo
Correctional Custody Unit 2.0 is a new rehabilitation program aimed at setting Marines on the straight and narrow and reintegrating them into their units. (Matt Burke/Stars and Stripes)

The two III Marine Expeditionary Force Marines drew the ire of their commanders recently for minor alcohol-related infractions while stationed on the tiny southern Japanese island prefecture of Okinawa. But leadership determined they were valuable to their units and should be given another chance rather than punished with separation from the Marines.

They were placed in the Correctional Custody Unit, a new rehabilitation program aimed at setting Marines on the straight and narrow and reintegrating them into their units. Dubbed CCU 2.0, the program began May 2 at Camp Hansen and could soon be launched at stateside Marine bases.

Cornelius and Daniels thought the program was going to be mostly manual labor and grueling punishment.

“I was watching old videos and all I saw was the hammering rocks, so I’m like, ‘We’re going to be busting rocks in jail?’ and I’m like, 'man,'” said Daniels, 28, a motor vehicle operator from Miami. “But when I first came in, it was totally different.”

The program includes mindfulness training, goal-setting and classes on a variety of topics, such as financial literacy and learning the jobs of other Marines, such as machine-gun operation.

Cornelius said it didn’t take long for him to realize that CCU 2.0 was helping him.

“I had really bad problems with patience. I was always frustrated,” said the rifleman, 24, of Huntsville, Ala. “This program has actually allowed me to kind of like calm down, assess situations and just kind of go with the flow of things.”

Marine officials are optimistic about the program.

“The mission is to get that wayward Marine to serve their initial contract obligations,” said Gunnery Sgt. Loren Ortiz, staff noncommissioned officer in charge. “Anything after that is icing on the cake — re-enlistment, meritorious promotion … We’ve received support from the highest levels of leadership.”

Participants are called “awardees” and spend seven or 30 days under the constant watch and critique of a senior watch stander and assigned watch standers. Each awardee has an individual dorm room with a bed, sink, water fountain and toilet. The program can accommodate 32 servicemembers at a time.

When it was launched in May at the Camp Hansen brig, planners decided to scrap a controversial part of the program that saw flak jacket-clad Marines pulverizing rocks with sledge hammers in the Okinawan heat.

Day 1 On Aug. 15, the seven-man Class 4-TAC-18 arrived in the rain outside the Hansen brig. Only the fourth class to go through the fledgling program, they stood outside with sea bags slung over their shoulders and were told to enter one at a time for in-processing.

The first Marine through the thick steel brig door didn’t make it one step before a watch stander was in his face shouting about neglecting to give the proper greeting.

The Marine exited and re-entered.

The awardee was instructed to dump his sea bag’s contents onto the deck and segregate it. His cellphone, wallet and other personal items were confiscated as contraband. He was given a foot locker and told which items should go inside. They were checked as each item was entered.

This process was repeated for each Marine while a commanding officer met with Ortiz to go over any health concerns the awardees might have, appointments and rules for visitation.

Next, awardees stood on footprints, just like in boot camp. But these were not the kind welcoming them to the Marine Corps; these welcomed them to the portion of the brig where incarcerated inmates are housed.

They toured the in-processing center and learned about body-cavity searches and prison uniforms, the cells and the cafeteria. Everything was cold and stark.

“It is vitally important that you give everything you have to this program,” Ortiz said. “There is hope, regardless of what it feels like right now. I am telling you; there is hope.”

Day 16 The CCU program is broken up into three weeklong periods called “conducts,” Ortiz said. Conduct 1, the first week, is the most strict. Rules are established, and battlefield communication — shouting, essentially — is used to enforce them. A board approves passage to the next phase.

“First thing I thought was everything was like boot camp all over again,” Daniels said. “Everything was stern, discipline, everything had to be done to the exact ‘T.’”

Reveille is typically at 4:30 a.m., the awardees said. They shave, brush their teeth and make their racks before physical training, which can be a hike or a run.

After, they shower and eat. Then they work on book reports and other tasks while waiting for classes to start. These run until evening, breaking only for lunch and dinner. Then they meet with senior watch standers who act as mentors.

They head for their racks for taps.

During Conduct 3 — the release phase — watch standers generally don’t need to step in.

On Aug. 31, the awardees completed a 3-mile run with cadence at 6 a.m. with the law enforcement battalion. They showered and got into their dress uniforms for inspection.

The process was rigorous.

The awardees changed out of their dress uniforms and filed into a classroom. They went over essays they had written and watched a video about goals, happiness, health and inner well-being by motivational philosopher Jay Shetty.

Some of the classes awardees take include “Thinking for Change” and “Prime for Life,” as well as a core-values refresher.

Correctional treatment specialist Michael Long asked the class about some of the things that bring short-term happiness as opposed to long-term or total happiness. They discussed goals.

They also participated in mindfulness training. Long said that’s one of the most beneficial aspects of the CCU program.

“We try to get them to be more reflective of what they’re doing; I think it’s getting them to slow down a little bit,” he said. “Making a good decision, making a bad decision, is just that brief moment; anger is a secondary emotion. So, if somebody is out drinking and they get mad, having the ability to just take a breath, think, can help you make the right decision.”

Day 28 By Sept. 12, the Conduct 3 awardees were ready to return to their units. They donned dress uniforms and made their way by van to the Camp Hansen theater. A torii gate had been set up on the stage along with the U.S. and Marine Corps flags.

Friends and members of their units sat in the audience as a show of support.

After several speeches extolling their accomplishments, the awardees were called to the stage one by one. They received a certificate and shook hands with Ortiz and CCU 2.0 commander Chief Warrant Officer Rachel Jacobs. They walked with pride and there were no signs of shame or dishonor.

“It feels great to graduate,” Cornelius said. “I still plan on improving.”

With the right attitude, Daniels said, one can easily become a better Marine through the CCU. He said he is nervous heading back to his unit, but he has seen the improvement in himself.

“It’s like being given a second chance,” he said.

Cornelius said he didn’t have any goals when he entered the program. He was leaving with a plan to use tuition assistance to take college courses until he separates from the service. Then he plans to use his G.I. Bill to go to welding school.

“I didn’t have that planned out until I came here, so I would definitely say it’s been beneficial for me in that aspect,” he said.

History of CCU The first CCU program was started in 1979 to give commanders an alternative to discharging undeveloped or immature servicemembers who get into trouble for minor violations of the Uniform Code of Military Justice. It became widespread in the mid-1990s, around the time one was founded at Camp Hansen, Marine officials have said. Marine Corps hubs of Camp Lejeune in North Carolina and Camp Pendleton in California also had versions of the penal institution and program.

The units were known for strenuous physical training that resembled boot camp and were last operated in the United States and on Okinawa in 2004, when they were ended due to staffing shortages while the U.S. military was preoccupied in Iraq and Afghanistan.

In recent years, Marine leaders on Okinawa began looking to revive the program to cut down on administrative separations and help Marines finish their enlistments honorably. Headquarters Marine Corps approved the relaunch in February.