New Marine amphibious vehicle on schedule and under budget 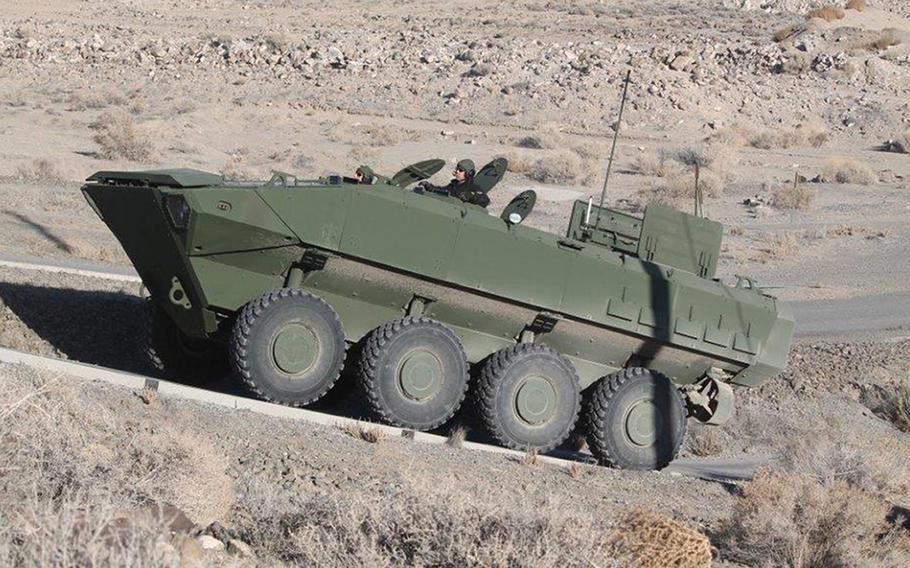 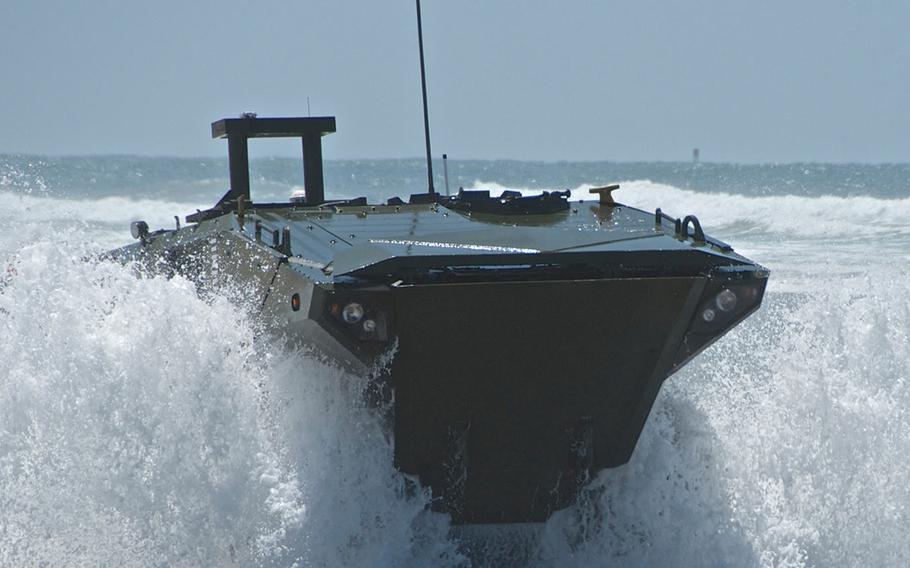 A Marine Corps push to replace its aging fleet of amphibious assault vehicles remains under budget and is on pace to enter the production phase, a government watchdog found, though it warned of continued potential for cost overruns or delays.

The Marine Corps launched the program to replace its Assault Amphibious Vehicle, which was first fielded in 1972, with the Amphibious Combat Vehicle — billed as a better protected and faster way to carry troops from ship to shore.

A protest to the Corps’ November 2015 selection of two contractor prototypes — BAE Systems’ SuperAV and SAIC’s Terrex 2 — caused a work stoppage that briefly delayed the schedule, but no further delays are anticipated and Marine officials are set to decide on which of the two it will order for its first batch of 30 vehicles in June.

The GAO, which Congress tasked with monitoring the acquisition program, had previously cautioned Congress about potential for cost increases or schedule delays due to the Corps’ aggressive approach. The program is a successor to the amphibious service’s defunct Expeditionary Fighting Vehicle program, which was canceled in 2011 over concerns about its affordability.

Before it was killed, the program had run up nearly $4 billion in costs. When the Pentagon allowed the Marines to seek a replacement vehicle, its new requirements emphasized cost targets.

The GAO credited the service for its management of the new program in its latest report. But officials expressed concerns that the service was planning to proceed with production without ensuring the contractor’s manufacturing processes were fully ready, which the report said could lead to quality issues and higher costs or delays.

In a response, the Pentagon said that it would monitor manufacturing and would seek to limit production risks, but that waiting could result in manufacturing setbacks.

The Marines want 208 new amphibious vehicles by 2022, with initial rounds of low-rate runs producing 30 vehicles in 2018 and 2019. This will outfit two of the Corps’ 10 amphibious assault companies.

Each vehicle was expected to cost between about $4 million and $7 million, according to a 2015 GAO report.

The GAO said it could not publicly say more about the manufacturing readiness or the technical performance of the vehicles since the two contractors were still in competition.

The new vehicle improves on the armor and land maneuver capabilities of the legacy AAV, with limited amphibious capabilities that will be addressed in a second round of manufacturing; however, Marine officials have said the initial vehicle is already close to meeting the second iteration’s requirements.

Both prototype designs feature 8-wheeled vehicles with V-shaped hulls designed to minimize the effect of blasts. Both also boast energy-absorbing seat designs to further protect passengers, though they carry far fewer troops than the original AAV.

The vehicles will be armed with a .50-caliber machine gun and 40 mm grenade launcher, the same as the AAV, but the weapons will be remotely operated.

The first model, called ACV 1.1, won’t fully replace the 46-year-old AAV, which officials have called “nearly obsolete,” so the Marine Corps is also upgrading nearly 400 of its 1,060 vehicles to protect against threats such as roadside bombs at an estimated cost of $1.7 million per vehicle. The Corps plans to replace those upgraded AAVs by 2035.

The Corps plans to field nearly 500 of the program’s second model by 2026 to outfit four of the service’s 10 amphibious assault companies.

A third model, called ACV 2.0, is expected to travel at twice the old AAV’s water speed, allowing the Marines to launch from ships beyond the view of shore without the aid of landing craft to carry the vehicles.

The two new prototypes, comparedBAE Systems SuperAV: Based on a design by Iveco, the Italian company that owns Chrysler and Ferrari, this 8-wheeled vehicle seats three crew and 13 embarked Marines. Its H-drive system allows for 8-wheel drive and its V-shaped hull and energy absorbing seats are designed to protect troops from blasts. It can travel 7 mph at sea and more than 65 mph on paved roads, according to a BAE Systems fact sheet.

SAIC Terrex 2: Based on a vehicle used by the militaries of Singapore and Turkey, this 8-wheeled vehicle can seat three crew members and 11 embarked Marines. It features a V-shaped hull to protect against blasts, as well as blast-mitigating seats. A central tire inflation system adds improved traction. It can travel 7 mph in seas with up to 3-foot waves and a reported 55 mph on land.