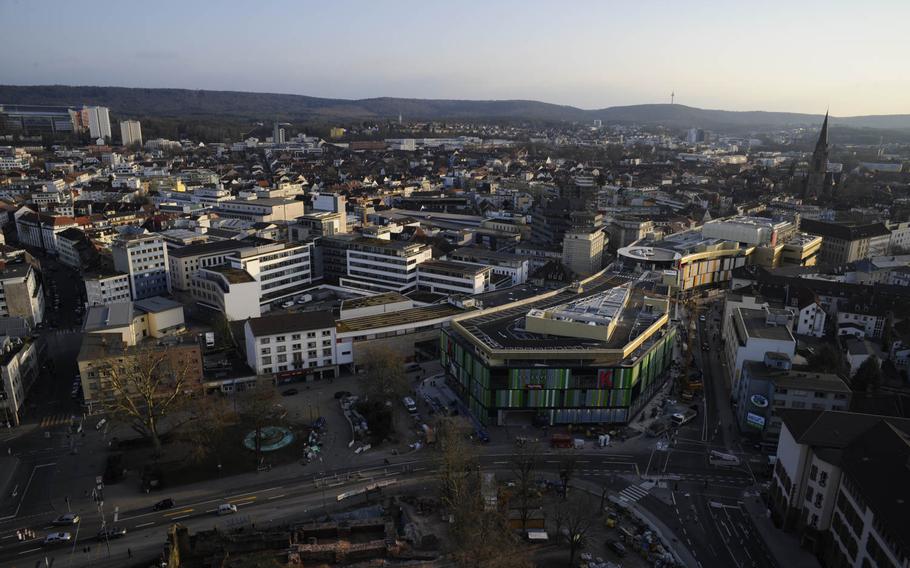 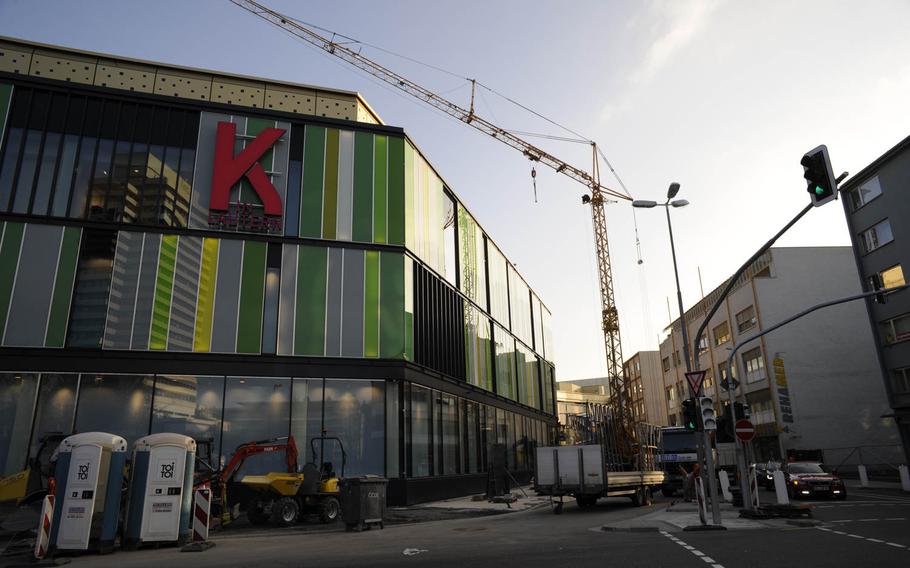 Buy Photo
Cranes were still visible Sunday, March 22, 2015, at the new mall built in downtown Kaiserslautern, Germany. The mall, called K in Lautern, opens its doors at 8 a.m. on Wednesday, March 25, 2015. The mall will have some 100 stores, including about a dozen eateries. (Andrew Yurkovsky/Stars and Stripes)

KAISERSLAUTERN, Germany — The grand opening of Kaiserslautern’s new downtown shopping mall on Wednesday will be marked by a number of special — if not weird — events.

The mall, known as K in Lautern, opens its doors at 8 a.m., with extended shopping hours until 10 p.m. Existing stores in the downtown pedestrian zone are also authorized to stay open until that time.

Among the attractions are Hans Rügner, the world champion in riding an antique-style large wheel bicycle, according to a release from the mall, and a giant shopping cart — billed as the world’s largest — on display at Am Altenhof.

Other draws are a bouncy castle, balloon artists, a marching band, art presentations and an evening fire show with dancers.

A number of the shops, however, will be familiar to Kaiserslautern shoppers, since they already have outlets in the pedestrian zone or nearby. These include C&A, DM drugstore, Runners Point, Dielmann shoes and Vero Moda. Some stores will have two locations, while others will shutter and move, according to a December article in the local newspaper Die Rheinpfalz

The mall, built at the location of the old Karstadt department store, has some 100 shops, including about a dozen eateries, according to its website, http://www.k-in-lautern.de/. Die Rheinpfalz reported that about 70 of those shops will be new to Kaiserslautern.

Traffic in and around the city on Wednesday could be heavy, as the grand opening coincides with a soccer match between Germany and Australia that is scheduled to start at 8:30 p.m. at Fritz-Walter-Stadion.

“With the international game and the simultaneous opening of the shopping mall, we expect a large flow of visitors in Kaiserslautern,” said Alexander Hess, a city official, in a news release.

Shopping opportunities in Kaiserslautern will expand again later this year, with the planned opening of an Ikea store. The company announced last week that its target opening date for the Kaiserslautern outlet, which will be located off the Opel traffic circle, is Aug. 13.