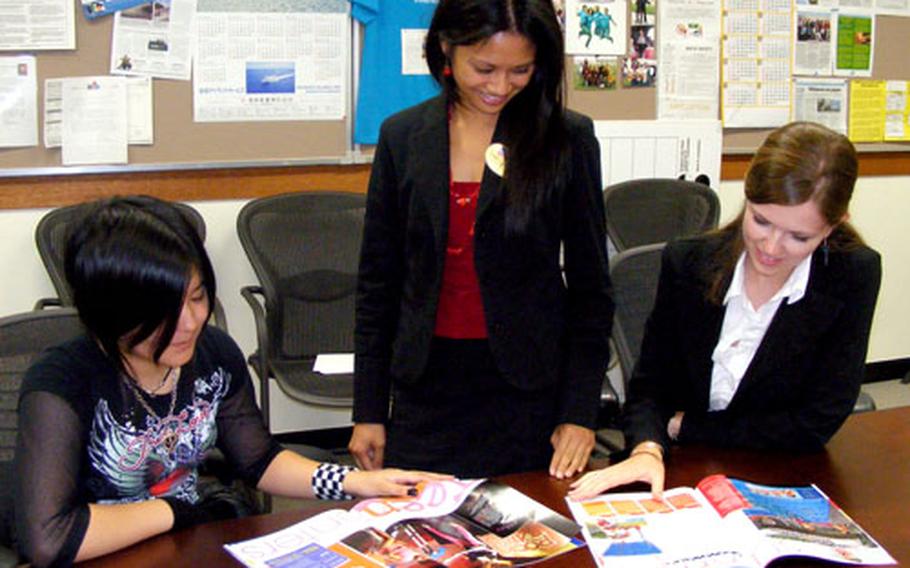 U21 staffers Mina Furusho, Cindy Ramos and Richenda Sandlin-Tymitz review a copy of the new MCCCS anual magazine published for teenagers on Okinawa. The first edition will be launched August 1. (David Allen / S&S)

Starting Aug. 1, they can pick up a copy of U21 (short for Under 21), a new annual magazine targeted toward the 13- to 18-year-old crowd published by Marine Corps Community Services.

"Being a teenager can be trying," said Cindy Ramos, a managing editor for the publication. "You&#8217;re not quite an adult, but you&#8217;re definitely not a kid any more. It can be especially frustrating when living in a foreign country."

The first issue comes in two parts. "What&#8217;s Hot" features information on Okinawa&#8217;s beaches, summer jobs and how to get out and about. Flip the magazine over and what was the back cover is now the front and offers information for the cooler months, or "What&#8217;s Cool."

"The concept for this started about two years ago when Margaret Zohni, a substance abuse counselor at Kubasaki High told us a lot of teens complained that they didn&#8217;t have anything to do," Ramos said. "The truth is there&#8217;s a lot to do out there &#8212; the word&#8217;s just not getting out."

Teenagers were surveyed on what they&#8217;d like to see in a magazine designed especially for them,

"Teens were heavily involved with the production to give it a more authentic look and feel," Ramos said. "We had teen interns do most of the writing, putting the information in their voice.

One intern, Mina Furusho, 19, is listed as both a "teenage research specialist" and a writer for the magazine.

"She should have been called our translator," Ramos, 28, said. "Everything we&#8217;d write had to go through Mina, who would put it into teenspeak. She was our cool filter."

"It wasn&#8217;t too difficult," said Furusho, a 2007 graduate of Kadena High School who plans to attend the Ringling College of Art and Design in Florida next month. "Some of the wordage needed to be changed and I had to explain what an &#8216;Okibum&#8217; was."

It&#8217;s a teenager totally into Okinawa life and culture.

"Having Mina edit our writing was a little bit humbling because you think you&#8217;re pretty cool, and quickly find out you&#8217;re clueless," said Richenda Sandlin-Tymitz, 24, the other managing editor for U21. "There were some surprises &#8212; like the importance of cell phones. I was amazed at how their lives revolve around them."

The copy in U21 is short and to the point.

"We wanted to find a voice the teens would be comfortable with," explained Henry Ortega, art director for MCCS. "We looked at other youth-oriented publications and noticed they all seemed to be talking down to their readers. We wanted to make sure to avoid that."

The magazine will be available at base high schools, youth and teen centers and libraries, Ramos said.

"We&#8217;re pretty excited," she said. "We hope the teens will use the magazine as a new friend taking them by the hand and showing them all the cool things available to them on the island."