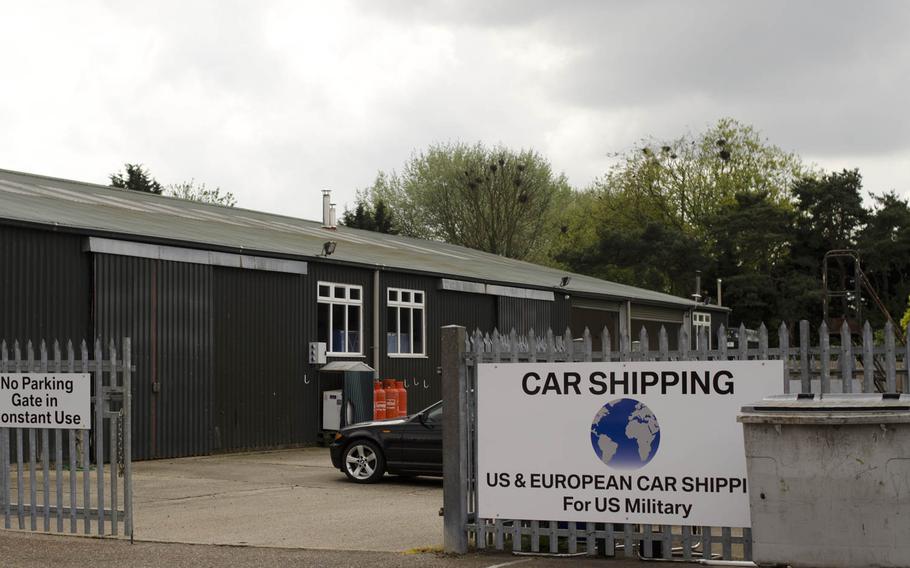 The drop-off and pick-up point for servicemembers shipping vehicles in England has moved to Mildenhall as a result of a new contractor taking over the service. Two other vehicle locations in England closed as a result of troop reductions. (Adam L. Mathis/Stars and Stripes)

RAF MILDENHALL, England — Servicemembers planning to ship vehicles as part of a permanent change of station should check the location of pick up and drop off points, as some locations around the world are changing and a few are closing.

The location change is due to the hiring of a new contractor.

U.S. Navy Capt. Aaron Stanley, a director with Military Surface Deployment and Distribution Command, said most of the new locations will be in the same city as the old pick-up and drop-off points.

International Auto Logistics, the new provider, had to “identify locations where they could conduct operations,” including securing lease or purchasing facilities, Stanley said.

The previous contractor, American Auto — which, according to a company spokesman, was outbid for the $304.5 million contract — will continue to deliver vehicles it has already picked up to the old locations, Stanley said.

Locations owned by the government — mainly in Germany and Italy — will be closed on May 1 and 2 while the two contractors’ switch employees; they will, however, accept emergency vehicle drop-offs, according to officials. These sites will reopen for all business on May 5.

Troop reductions have led the government to close eight locations, most in the U.S. and England, officials said. Seven of them will close on May 1, and one in Mannheim, Germany, has already closed.

International has established a website, pcsmypov.com, for customers to find information about shipping a vehicle and tracking its progress.

Besides the change in locations and new website, Stanley said, there are virtually no other differences between shipping a vehicle with the old and new contractors.

The Defense Department previously used several contractors to ship vehicles, so different vendors could have been responsible for the ocean and land shipments of vehicles, according to a DOD release. This changed in 1998, when American won the contract and became solely responsible for all aspects of transporting a vehicle, the release says.

VPCs slated for closure in the U.S.