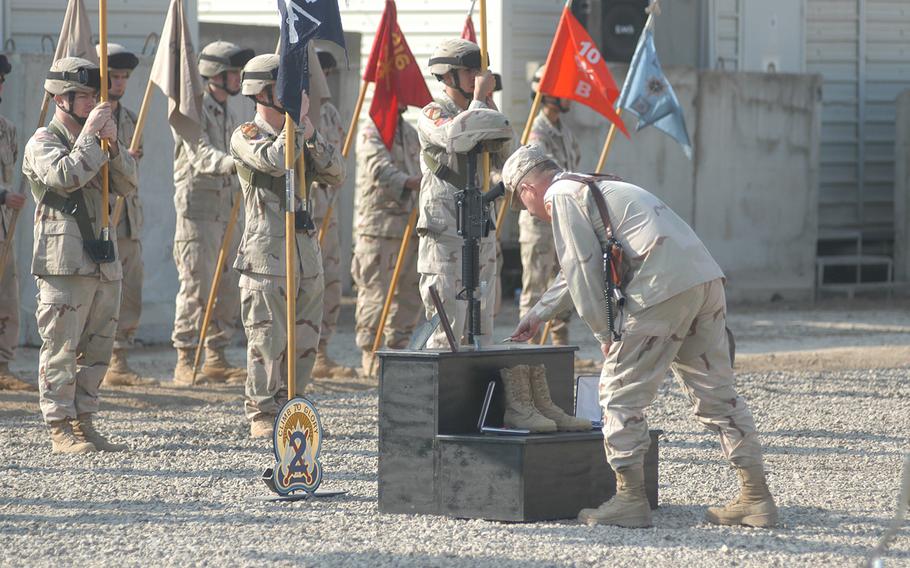 Buy Photo
A solider lays a device on a battlefield cross erected for Spc. Dwayne McFarlane, who was killed in Iraq on Jan. 9, 2005. The nonprofit behind the effort to establish a national memorial dedicated to the Global War on Terror got a new director Monday, April 9, 2018. (Jason Chudy/Stars and Stripes)

WASHINGTON — The nonprofit behind the effort to establish a national memorial dedicated to the Global War on Terror got a new director Monday after the group’s founder left in mid-March.

Michael “Rod” Rodriguez, an Army Special Forces veteran, will now lead the Global War on Terror Memorial Foundation through the yearslong, multistep process to raise funds for the memorial, select a site, design and construct it.

Andrew Brennan, who founded the nonprofit, conceived the idea for the memorial in 2014 and shepherded legislation through Congress to allow for its construction. President Donald Trump signed the bill in August.

Brennan is no longer part of the foundation. He declined to comment on the situation, instead referring questions to the foundation’s new leadership.

Rodriguez said the transition marks the start of a “new chapter” for the foundation but that its purpose remains the same.

“It’s an organization, it was never centered around an individual,” Rodriguez said. “There hasn’t been any drastic changes, definitely not. The board and the trustees are the ones who guide this organization.”

In a written statement, David Burke, president of the foundation’s board of trustees, said the foundation “faces an exciting new future.” He added Rodriguez was “ideally positioned to lead the foundation through the vital next steps ahead.”

The intent of the memorial is to honor servicemembers who have fought and died in Iraq and Afghanistan since the 9/11 terrorist attacks, as well as troops still fighting. With the fighting still going on, the nonprofit had to secure a special exemption to a law requiring Congress to wait 10 years after the official end of a military conflict before considering a memorial in the nation’s capital.

Now that the group has approval to build the memorial on federal land, it’s starting a detailed, 24-step process to establish it. The process begins with site selection.

Rodriguez said the foundation is planning to fight for a spot on the National Mall. Another group of veterans — ones working to build a National Desert Storm War memorial — is also attempting to secure a location there.

“We think that it has the significance to warrant it,” Rodriguez said. “It’s a noble cause, a right cause, a just cause. The fact that the Global War on Terror affects every single person today is pretty profound.”

For Rodriguez, the mission is personal. During his 21 years with the Army, he deployed nine times. His wife, also an Army veteran, deployed six times, and his oldest son — who serves with the 82nd Airborne Division — just returned home from his first deployment to Afghanistan.

Rodriguez welcomed a new grandson in March and wondered whether he would someday fight in the War on Terror, too. In the past 17 years, more than 2.5 million Americans are estimated to have deployed in support of the wars in Iraq and Afghanistan.

“Holding my grandson, I had a moment. I was thinking about this memorial and thinking he could very well serve in this conflict,” Rodriguez said. “And that, for me, really strengthened my resolve.”

The Global War on Terror Memorial Foundation is hoping to raise between $40 million and $50 million for the memorial, which is expected to be completed in 2024. A design has yet to be determined.