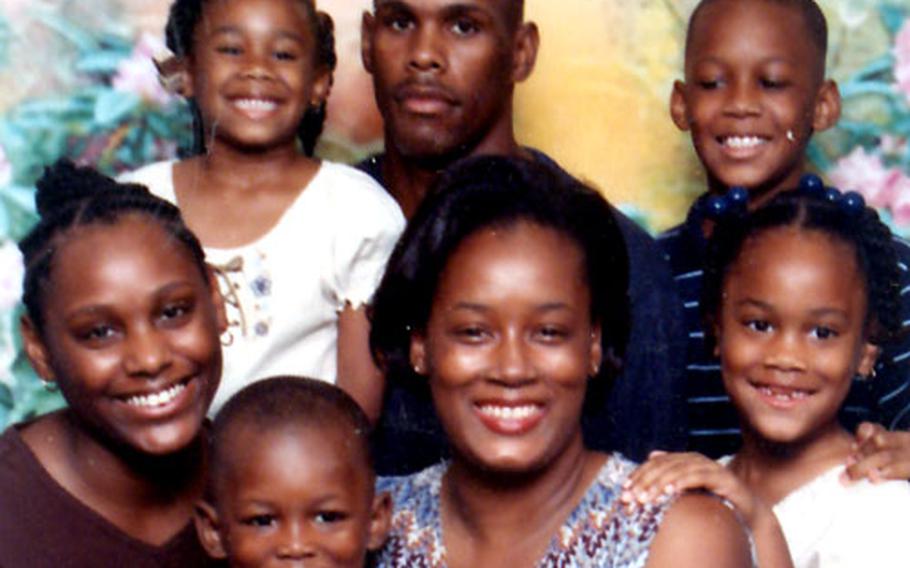 The Parker family: Pvt. James Parker is flanked in the back row by his children ReShaya, 9, and Darrian, 11. In the center row, from left, are Jamesha, 14, DeRessia Parker, and Jaressia, 8. James, 5, is on DeRessia’s lap. Not shown is Janae, 3 months. (Courtesy of DeRessia Parker)

Earlier this month, the phone rang at DeRessia Parker&#8217;s quarters at Vilseck, Germany.

Richard Russell, an investigator for Paul W. Bergrin, was calling to tell Parker the high-profile New Jersey-based defense lawyer was coming to Germany to try to help her husband, Pvt. James Leon Parker.

James Parker, 33, Company B, 2nd Battalion, 63rd Armored Regiment, is serving a six-month sentence at Mannheim Correctional Facility. As Staff Sgt. James Parker, he was convicted by a jury on Thanksgiving Day of negligent homicide and dereliction of duty in connection with the January 2005 death of Pfc. Gunnar D. Becker, 19, from Forestburg, S.D., while their unit was deployed to Iraq.

Bergrin is best known for attempting to have President Bush and Defense Secretary Donald Rumsfeld testify in the trial of one of his clients, Sgt. Javal Davis. The tactic was an attempt to prove higher-ups, and not ordinary soldiers such as Davis, were responsible for prisoner abuses at Abu Ghraib prison in Baghdad. And while neither Bush nor Rumsfeld ever took the stand in the case, the judge, Col. James Pohl, did allow Bergrin to interview Gen. John Abizaid, head of U.S. Central Command, and Maj. Gen. Ricardo Sanchez, who was senior U.S. commander in Iraq at the time of the Abu Ghraib incident.

Although he was convicted, Davis was sentenced to four months in jail, a far less severe penalty than other defendants such as Spc. Charles Graner, who got 10 years.

Bergrin cited a litany of factors, including the fact that Parker did not directly cause the accident that killed Becker. Becker was struck in the head by a round from a machine gun that he and another soldier were handling. Parker was charged because, as the tank commander, his crewmembers did not to clear the weapons as the tank entered their base during a firefight.

Parker is a scapegoat in an attempt to cover up larger failings in the unit, Bergrin says.

No other soldiers or officers were charged in Becker&#8217;s death. At the time of Parker&#8217;s conviction, 1st Infantry Division officials told Stars and Stripes that Parker received a fair trial, and was convicted by a panel made up of noncommissioned officers and officers.

Bergrin said he hopes to get clemency through the command&#8217;s authority to pardon Parker and even restore his rank and pay.

But legal options are somewhat limited. Because Parker&#8217;s sentence does not include the death penalty or a discharge, and is less than one year, his case is not eligible for automatic appeal under military legal regulations.

&#8220;These are highly unusual requests and have been denied,&#8221; Maj. William Coppernoll, 1st ID public affairs officer, wrote in an e-mail response to a Stars and Stripes query. &#8220;There is no right to a personal audience with the convening authority to discuss the client&#8217;s case.&#8221;

Hunzeker, through division staff judge advocate, has agreed to consider anything Bergrin wishes to submit, Coppernoll added. To date, nothing has been submitted. The SJA informed Bergrin that he would meet with him in early February, but received no reply, he said.

Beyond clemency, options include requesting that the Army Judge Advocate General Corps review the case, said Russell, Bergrin&#8217;s investigator. The best-case scenario may be to reverse the conviction and win another court-martial, Bergrin said, &#8220;and I think I can win.&#8221;

If nothing changes, Parker&#8217;s date for leaving the Army is 2011. After his sentence is complete, he would return to duty as a 33-year-old E-1 and serve the remaining five years of his contract.

Nothing is likely to happen before Parker is released four months from now. Moreover, DeRessia Parker questions whether clemency or even a new trial can undo the damage to her husband&#8217;s reputation.

Simply freeing her husband does not ensure their future, she said.