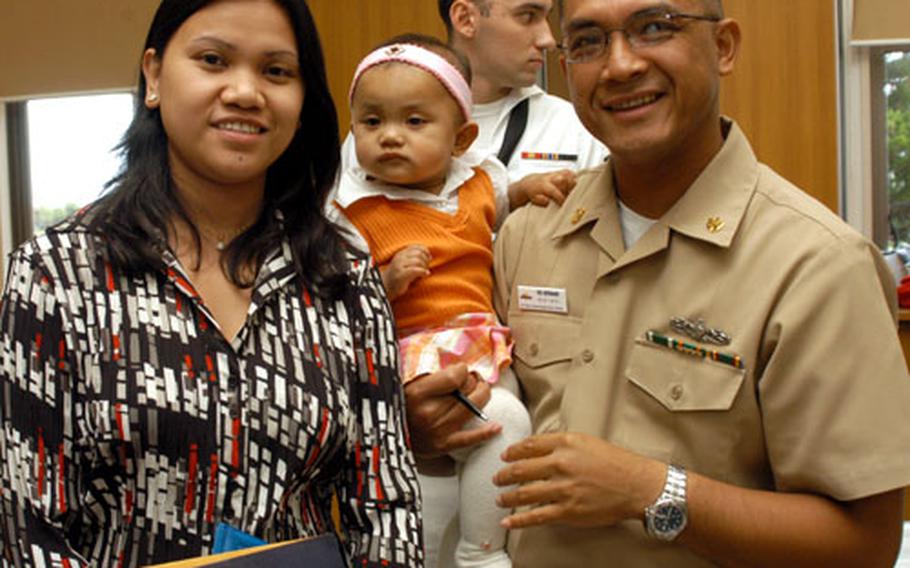 Chief Petty Officer Vic Hermano became a naturalized U.S. citizen in 1985. His wife, Alma, became an American on Friday, during a ceremony at Yokosuka Naval Base, Japan, thanks to a new law that allows military spouses to be naturalized overseas. The Hermanos are natives of the Philippines; Tiffany is their daughter. (Allison Batdorff / S&S)

Chief Petty Officer Vic Hermano became a naturalized U.S. citizen in 1985. His wife, Alma, became an American on Friday, during a ceremony at Yokosuka Naval Base, Japan, thanks to a new law that allows military spouses to be naturalized overseas. The Hermanos are natives of the Philippines; Tiffany is their daughter. (Allison Batdorff / S&S) 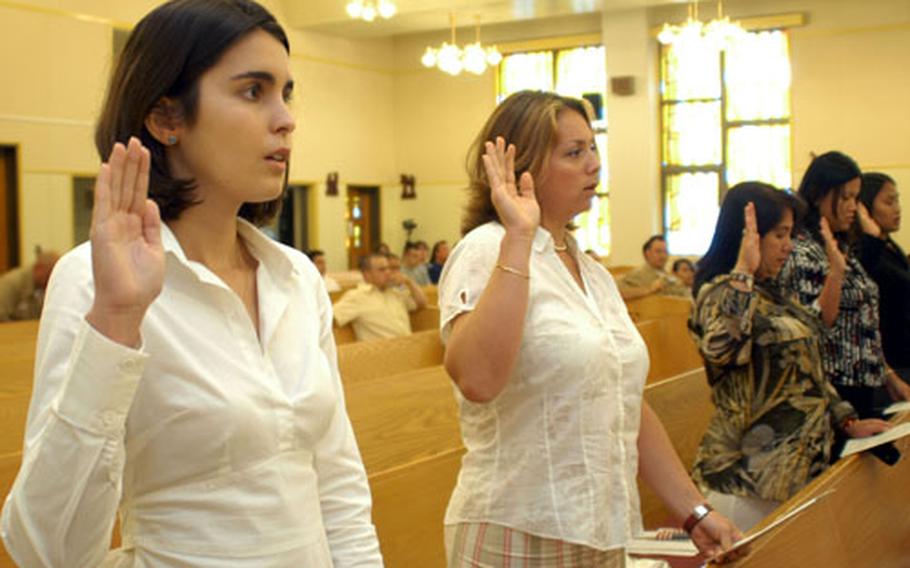 So, when Yensi Bello&#8217;s Navy husband got orders to Japan, the Havana-born 25-year-old remained stateside to untangle some political knots.

"It was a nightmare to get her here," said Eduardo Bello, a second class petty officer at Yokosuka. Also from Cuba, he became a U.S. citizen in February 2007.

On Friday, Yensi Bello became a U.S. citizen in Yokosuka&#8217;s Chapel of Hope, thanks to a new law that allows spouses of active-duty servicemembers to be naturalized overseas.

The couple said they are planning a trip to China with their new U.S. passports.

The 2008 National Defense Authorization Act was signed Jan. 28, but Friday was the first ceremony in Japan in which military spouses raised their hands alongside those in uniform.

Five spouses along with 47 servicemembers from bases throughout mainland Japan and Okinawa became citizens. The U.S. Embassy in Tokyo was on hand to update passports and help the new citizens apply for one.

Friday&#8217;s ceremony was "just the beginning" of military spouses taking advantage of the new law, said Kenneth Sherman, the Citizenship and Immigration Services officer for Japan and South Korea.

Sherman said he swore in another military spouse at the field office in Seoul before coming to Japan. More will apply when they find out about it, he said.

"It just makes sense," Sherman said at an instructional session earlier in the week.

"The spouses are as much a part of the military as the active-duty. When they move, you move."

The basic requirements for a military spouse to become a citizen have not changed.

He or she must be married to an active-duty servicemember for at least three years, be a green-card holder, and be overseas with command sponsorship. But now, spouses don&#8217;t have to travel back to the United States to complete the process, Sherman said Friday.

That was a blessing to military spouse Melissa Fitzpatrick &#8212; born in the United Kingdom &#8212; as buying international plane tickets for her and her two children for a two-day process would be a financial "ordeal," she said.

Becoming a U.S. citizen also will open doors in the on-base job market, said Sirikit Imelda Weeden, who is from the Philippines.

Weeden started the application process in 2004 but shifted into the new program when she heard about it, she said.

Delia Foreman, also from the Philippines, said she chose citizenship as a mark of solidarity with her family.

For more information on the program, visit www.uscis.gov/portal/site/uscis.

Spouses applying for citizenship must first fill out the N-400 application form and send it to the Nebraska Service Center. Applications are available at www.uscis.gov.

Processing the form could go quickly or take months, depending on caseload, said Kenneth Sherman, Citizenship and Immigration Services field office director at the U.S. Embassy in Seoul.

Once the form is processed, the applicant should contact the nearest Department of Homeland Security&#8217;s Citizenship and Immigration Services office.

Sherman heads that office for both South Korea and Japan.

Sherman says he usually travels to Okinawa once a year and to Yokosuka Naval Base two or three times a year to perform citizenship ceremonies and take care of related business.

He performs citizenship ceremonies in South Korea about every three months, he said.