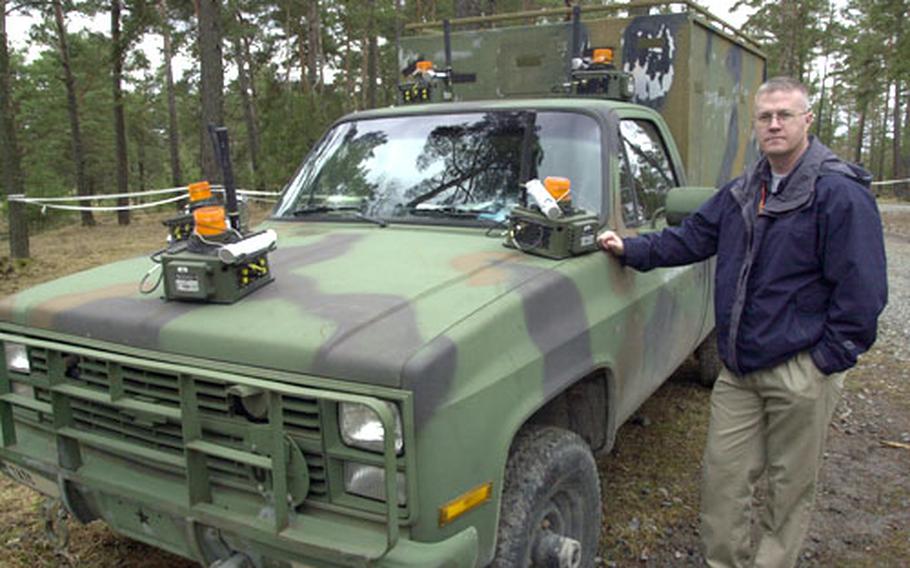 Jim Meredith, section chief of the Training Support Activity Europe’s Deployable Instrumentation Systems Europe, Tuesday with a vehicle covered in sensors that can relay data to satellites and allow trainers to watch the vehicle’s movements in real-time and record them for after-action review. (Seth Robson / S&S)

GRAFENW&#214;HR, Germany &#8212; A laser training system billed as &#8220;MILES-on steroids&#8221; is helping soldiers track their performance through satellite imagery at ranges all over Europe.

Soldiers from Headquarters and Headquarters Company, Division Support Command, 1st Armored Division, trained with the equipment Tuesday at Grafenw&#246;hr, then watched their performance on video screens in a tent at the range.

The newer system is lighter and more accurate than MILES, which stands for Multiple Integrated Laser Engagement System. And DISE uses global positioning satellites to track soldiers and vehicles across the battlefield. Trainers can use video screens to watch the soldiers and their vehicles as they move across the range and engage the enemy, Meredith said.

So far, DISE has supported units all over Germany. In July DISE will travel to Bulgaria to instrument platoons of American, Romanian and Bulgarian soldiers, T-72 tanks and BMP armored personnel carriers. In September the system will be used in Russia to instrument 200 to 300 Russian and American soldiers as well as Russian T-80 tanks, Meredith said.

Development of DISE parallels the Joint Multinational Readiness Center&#8217;s EIS (Exportable Instrumentation System), which is based on a fixed system already in place at Hohenfels.

Meredith said DISE&#8217;s advantage is that its equipment can be moved in any kind of vehicle making it more deployable than EIS, which travels in a pair of large trailers.

DISE has enough gear to track a battalion including almost 900 soldiers, civilians on the battlefield and opposition forces as well as their vehicles, he said.

The system is particularly useful for after-action reviews, Meredith said.

&#8220;They get instant replay of every individual soldier. A soldier sees his name and what goes on the map. When he shoots somebody, you can see the shot and what it did,&#8221; he said.

The system includes speakers inside vehicles that simulate the noise of incoming rounds, artillery or makeshift bombs detonating. Orange lights attach to the front of vehicles and flash if the vehicle is hit.

&#8220;If you get a near miss there is the noise of a bullet striking nearby. If they are wounded it tells them where the wound is on their body; if the wound is serious enough they can&#8217;t fire their weapon. If they get a leg wounded and don&#8217;t get medical treatment quickly they will die,&#8221; Meredith said.

The system also includes sensors that can be placed inside buildings to track soldiers when they cannot be seen by satellites.

So what do soldiers think of DISE?

One of the soldiers training on Tuesday, Pfc. Nicholas Floyd, 21, of Shreveport, La., used the gear to practice a convoy mission that included several attacks involving makeshift bombs and insurgents ambushing his unit with crew-served weapons.