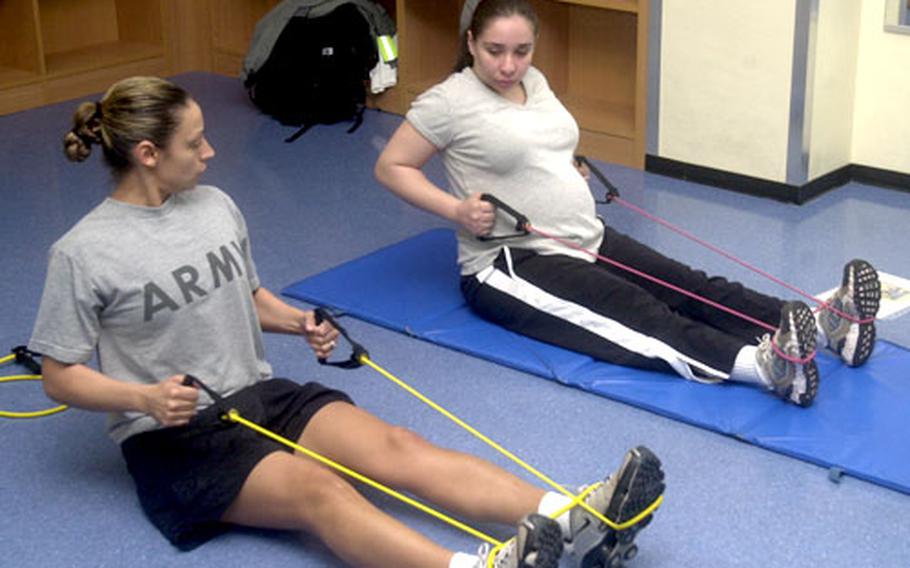 Staff Sgt. Jennifer Francis, left, shows Spc. Guadalupe Zelia, who is eight months pregnant, the proper form for an exercise Wednesday during a session of the Army&#39;s pregnancy/postpartum physical training program. The program began May 8 at Landstuhl, which is a pilot site for the program aimed at keeping soldiers fit during and after pregnancy. Francis is an instructor in the program. (Steve Mraz / S&S)

LANDSTUHL, Germany &#8212; As if being pregnant and giving birth weren&#8217;t hard enough, imagine having to deliver on a physical fitness test six months after delivering.

That&#8217;s the case for all Army active-duty mothers, who have to pass a PT test 180 days after giving birth.

Now a program for pregnant and postpartum soldiers at Landstuhl Regional Medical Center is giving them the training and education they need to stay fit and make the grade.

The program, which began May 8, is officially called &#8220;Pregnancy/postpartum physical training.&#8221; Landstuhl is a pilot site for the program, and it is also being tested at other sites in Europe and the States.

&#8220;It is in hopes that this will become the standardized pregnancy and postpartum program for the Army,&#8221; said Joyce Patrick, director of the Landstuhl Wellness Center and a health promotion coordinator for the Center for Health Promotion and Preventive Medicine Europe.

In 2002, about 8 percent of female active-duty soldiers gave birth. Previously, the Army did not have a physical training program for pregnant or postpartum soldiers. Most training personnel at the unit level are not familiar with proper exercises for pregnant and postpartum soldiers, according to CHPPM literature. As a result, numerous soldiers are left to train on their own or do not train at all, which becomes a morale and readiness issue for the soldier and unit, according to the CHPPM document.

Therefore, the pregnancy/postpartum physical training program was developed by the Army&#8217;s U.S. Center for Health Promotion and Preventive Medicine in collaboration with others.

The goal of the program is to improve force readiness by providing a safe, effective and standardized program led by instructors trained in pregnancy and postpartum fitness, according to CHPPM literature.

&#8220;The program is designed to maintain fitness levels of pregnant soldiers and successfully integrate postpartum soldiers back into unit physical training programs, having met their physical fitness and height/weight standards,&#8221; the document reads.

Three days a week for an hour each day, the women perform a variety of exercises tailored to their special condition. One day a week, pregnant soldiers attend an educational session where they learn about such matters as nutrition and childbirth.

The women are split into groups depending on where they are in their pregnancy. Soldiers in the first trimester of pregnancy and postpartum mothers are in one group and can work at a different intensity level.

Soldiers in their second and third trimesters work together within their limits, said Master Sgt. Patricia Mullen, noncommissioned officer in charge of the education division at Landstuhl.

&#8220;If there were no structured program, then you would just go out there, and some would not do any PT,&#8221; Mullen said. &#8220;Some would go to their sections and just jump right back into a regular unit PT &#8212; not, per se, a PT program that was geared toward getting back in shape.

&#8220;Your body has just gone through all the changes of being pregnant and delivering a baby. We progress over a six-month period until they reach that stage of being able to pass the PT test.&#8221;

Pfc. Jody Davis, who is seven months pregnant with her first child, believes that the program will help her pass the PT test six months after giving birth.

&#8220;With this program, it will definitely be easier just because I&#8217;m going to be able to maintain everything that I have,&#8221; said the healthcare specialist at Landstuhl.