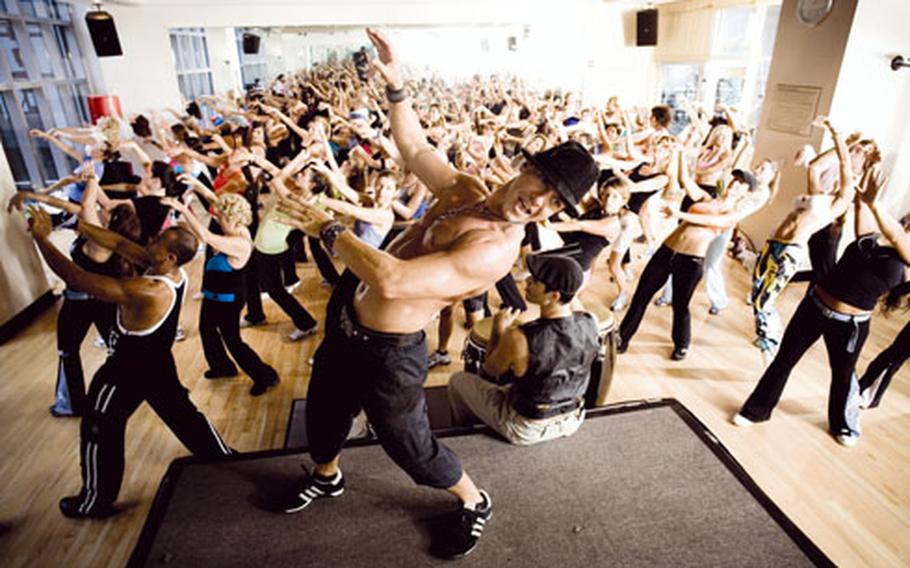 Alberto “Beto” Perez, founder of Zumba, leads an exercise-dance class in Miami, Fla. The Zumba craze is coming to RAF Lakenheath this week when a class — which is part aerobics, part Latin dancing — begins at the base gym Friday. (Courtesy photo)

RAF LAKENHEATH &#8212; The gym here will debut a new fitness class Friday, though the instructor insists it&#8217;s more like a party than a workout.

It&#8217;s called Zumba, and it&#8217;s part aerobics, part Latin dancing. It combines classic floor moves like the grapevine and hamstring curls with the hip-shaking moves and music of salsa, merengue and more.

"We even do some belly-dancing moves," said instructor Laura Galvez, an Air Force spouse.

The routines feature aerobic interval training with a combination of fast and slow rhythms to tone and sculpt the body. It targets areas such as the legs, arms, abdominals, butt and heart.

And don&#8217;t worry if you&#8217;re not a dancer by nature. Zumba is structured so that basic moves can be mimicked by beginners and stylized by those more advanced in the dancing arts.

"You just have to come in and want to have fun. The steps are basic and then everybody puts their own twist on how to do them," said Galvez, a native of Guatemala who has been Latin dancing her entire life.

"For instance my husband doesn&#8217;t have time to take a dance class with me, but with Zumba you don&#8217;t need a partner and you still get to dance," she said.

A copyrighted name and company, Zumba was featured in major metropolitan newspaper and television outlets throughout 2008. Founded by Miami-based dance instructor Alberto "Beto" Perez, the classes seems to have spread from Florida like wildfire.

Check out the new Zumba class at 5 p.m. Friday.