A man grieves at the site where a protester was killed during violent clashes in Bishkek between government forces and protesters. Flowers scattered around the city center mark the spot where each of the 84 protesters who were killed fell. (Heath Druzin/S&S)

A man grieves at the site where a protester was killed during violent clashes in Bishkek between government forces and protesters. Flowers scattered around the city center mark the spot where each of the 84 protesters who were killed fell. (Heath Druzin/S&S) 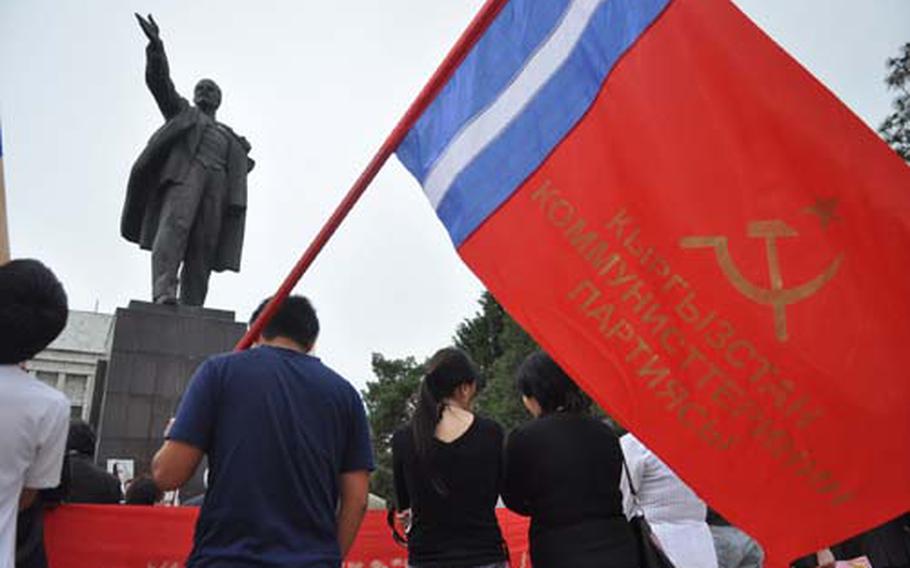 Supporters of the Kyrgyzstan Communist Party rally in Bishkek, the national capital, near a statue of Vladimir Lenin in honor of May Day. The party, which plans to run in planned October elections, advocates closing Manas air base, a major U.S. military hub for the war in Afghanistan that lies just outside Bishkek. (Heath Druzin/S&S) 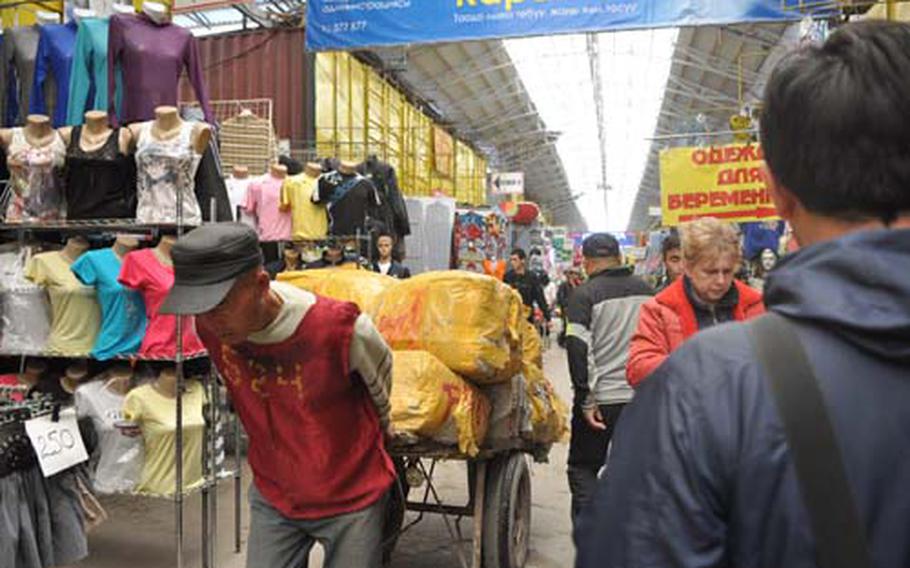 The seemingly endless lanes of the Dordoi market in Bishkek remained crowded with local shoppers last week. But the market&#39;s main customers, foreign wholesalers, were largely absent because all of Kyrgyzstan’s neighbors have shut their borders with the country after a violent uprising knocked the government from power. Business at the market, one of the largest in Central Asia, has withered and many shopowners are angry with the country’s interim government. (Heath Druzin/S&S) Mayrambek Turpanov, 70, lives in the village of Dacha, Kyrgyzstan, which borders Manas air base. Like many residents, Turpanov complains about noise from the base and says pollution from it has made it difficult to grow vegetables in his garden and is killing the small forests that dot the area. (Heath Druzin/S&S)

BISHKEK, Kyrgyzstan &#8212; One of the first moves of Kyrgyz interim leader Roza Otunbayeva after coming to power last month was to promise renewal of the lease for the key U.S. air base near Bishkek, the country&#8217;s capital.

Days later, her foreign minister criticized Americans for worrying only about the base &#8212; officially called the Transit Center at Manas &#8212; at the expense of supporting democratic values.

Now, leaders of the new government are hesitant to say anything publicly about the base.

Apart from the mixed messages, the interim government&#8217;s tenuous hold on power and influence from Russia are clouding the future of Manas, a major logistical hub for the U.S. military effort in Afghanistan and a controversial issue among the Kyrgyz. The continuing instability in the impoverished, mountainous former Soviet republic was underscored Thursday when protesters loyal to the country&#8217;s former president, ousted in an April uprising, briefly retook government buildings in the country&#8217;s south.

&#8220;It&#8217;s possible that soon Manas air base might have problems,&#8221; said Mars Sariev, a Kyrgyz political consultant with ties to the interim government.

Some in the country question the leaders&#8217; legitimacy, citing the violence that put them in office and the rampant looting and vandalism blamed on some of the protesters.

Many of the new leaders are gearing up to run in the parliamentary elections promised for October and politicians are tiptoeing around the base&#8217;s future.

Kyrgyzstan national security director Keneshbek Buyshebaev said the base plays an integral role in sustaining stability in Central Asia, but gave no assurances of continued government support for Manas.

In addition, many members of Bakiyev&#8217;s family remain in the country and wield significant influence, especially in the former president&#8217;s strongholds in the south, like Osh and Jalal-Abad. Some of the pro-Bakiyev politicians who have not fled the country are making ominous statements about the former president&#8217;s clan making a comeback. On Thursday pro-Bakiyev activists briefly took hold of government buildings in the south before pro-interim government demonstrators booted them out. At least one person was killed and 60 injured in the latest violence.

&#8220;Bakiyev himself may not return soon, but his family is still in Kyrgyzstan and still possesses huge financial and political resources and retains huge influence in the country,&#8221; said Alisher Sabirov, a pro-Bakiyev politician who lost his seat in parliament when the government was dissolved following the uprising. &#8220;According to the law, [Bakiyev] is still the president.&#8221;

Bakiyev is currently in exile in Belarus and has said he would not to try to regain power in Kyrgyzstan.

U.S. government officials have said they are optimistic about the base&#8217;s future.

As Bakiyev did, whoever becomes Kyrgyzstan&#8217;s eventual leader will have to delicately balance the interests of two world powers who often don&#8217;t see eye to eye.

Echoing the view of many in Bishkek, Medet Tinlegenov, a political science professor at Bishkek&#8217;s American University of Central Asia, said it was unlikely that Manas will close but that Russian pressure may persuade the government to renegotiate the contract to allow for more Kyrgyz oversight of the base. Russia has a base in Kant, outside Bishkek.

In Bishkek, the nation&#8217;s largest city, some residents are growing increasingly unhappy with the interim government. At the sprawling Dordoi Market, one of the biggest in Central Asia and an economic linchpin for Kyrgyzstan, grim-faced vendors complain of the government&#8217;s inaction in reopening the borders with their neighbors, all of which have been closed since the uprising. The foreign wholesalers who are the lifeblood of the market have disappeared and business has withered.

&#8220;The interim government came into power via looters and rioters and they stole everything from us,&#8221; said Lydia Sedisheva, who sells clothing wholesale at the market.

The Kyrgyz have mixed opinions about the base, for which the U.S. pays $60 million in annual rent to Kyrgyzstan. The current one-year lease &#8212; signed after Kyrgyz officials won a substantial increase from $17 million a year &#8212; expires in July. Some say the jobs and money the base brings to the country are too important to give up, but others are angry about U.S. support for Bakiyev and the millions of dollars he is thought to have siphoned for himself and family members from U.S. contracts.

In the villages nearest the base, residents complain about noise and pollution, saying that fuel dumped from planes has poisoned the soil, ruining vegetable gardens and killing the small forests that dot the area.

Manas spokesman Maj. Rickardo Bodden disputed the accusations of the villagers, saying that planes had dumped fuel only three times since Manas opened in December 2001, all for emergencies and at altitudes where the fuel would dissipate before hitting the ground. He also said the base, called a &#8220;transit center&#8221; by the military, had received no complaints about noise.

While many Kyrgyz express disgust at the alleged corruption and excess of the Bakiyev administration, they also view the interim government as weak and unprepared and say they are on guard for another uprising. Erlan Sakanovich, the editor of a leading Bishkek newspaper, described the situation as &#8220;stable instability&#8221; that &#8220;can blow up any time.&#8221;

Kyrgyz tradition calls for 40 days of mourning for the dead and there are murmurs in the street that more demonstrations could start in the coming days, after the mourning period for those killed in the April uprisings.

In a country that shook off a post-Soviet dictatorship only to see uprisings topple two governments in five years, no leaders can be counted on to stick around very long, said Sariev, the Bishkek political consultant.