Capt. Sam Smith, an Air Force reservist brought on to co-pilot KC-10s from Travis Air Force Base in California, talks with a boom operator during refueling operations. Smith says when there are jets in the air, they are busy and things get exciting. (Allison Batdorff / S&S) 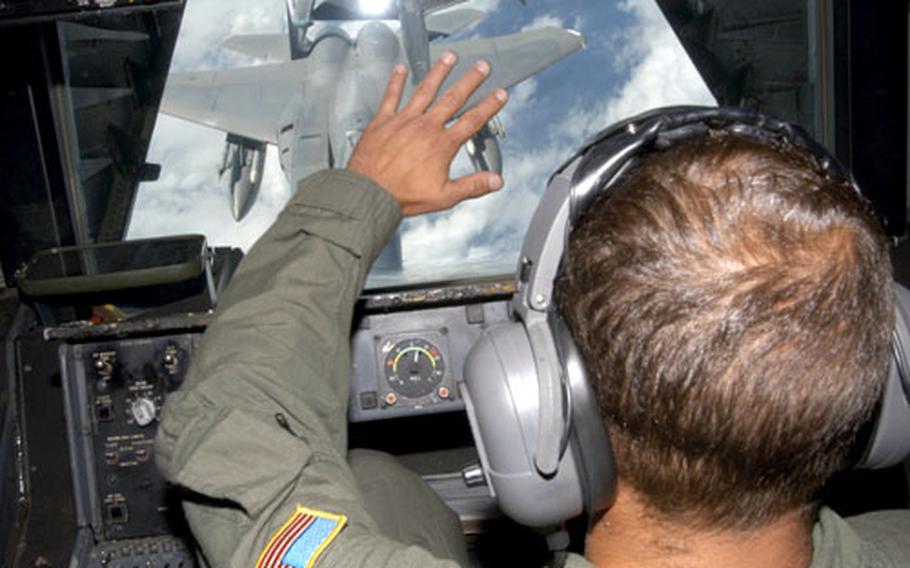 Airman 1st Class Michael Meitz waves off an F-15 from the KC-10 during a refueling Thursday as part of Valiant Shield. (Allison Batdorff / S&S)

Get interviewed by an enthusiastic crew of Taiwanese reporters.

Eight hours on a KC-10 and you talk about everything under the sun &#8212; literally &#8212; as the U.S. Air Force tanker flies in a circle and waits for planes to refuel. The cushy new tankers hold upward of 300,000 pounds of fuel, and during an exercise such as Valiant Shield, the large-scale joint military exercise off the coast of Guam last week, they are in demand.

A four-hour sortie turned into eight hours Thursday as the KC-10 became &#8220;the only gas in the sky&#8221; and stayed airborne to refuel the many Air Force and Navy jets there for the exercise in which an estimated 280 aircraft are participating.

The KC-10 tanker crew is from Travis Air Force Base in California.

The KC-10 is a comfortable place to wait. Unlike the pilots and engineer, who must stay glued to their seats, anyone else aboard can mill about the cabin, which basically looks like a commercial airplane, complete with soft seats, climate-control and hot meals made in the oven.

Airman 1st Class Michael Meitz made pizza while he waited. He loves his job as a fuel delivery boom operator, he said. Getting the boom in the right position &#8212; without shattering the glass in the fighter jet&#8217;s cockpit &#8212; requires concentration and serious hand-eye coordination.

There was some discussion about whether this gives boom operators an unfair advantage in video and the grab-the-prize-with-the-claw games.

And once the pilot gets fuel, both parties wave and the jet breaks away into the blue.

Also aboard on Thursday were seven Taiwanese journalists who attended Valiant Shield out of curiosity, said Ting-Chun Wang, from Defence International media.

&#8220;When we heard that this was not the U.S. showing power against China, we thought this might be interesting to us,&#8221; Wang said.

The journalists spent the first days of their visit on the USS Ronald Reagan aircraft carrier, and then took the tanker trip, during which Wang developed a fondness for barbecue potato chips.

And, with so much downtime up high, they were able to put together their broadcast in time for the nightly news.

Everyone else was able to get a great perspective of tanker life.