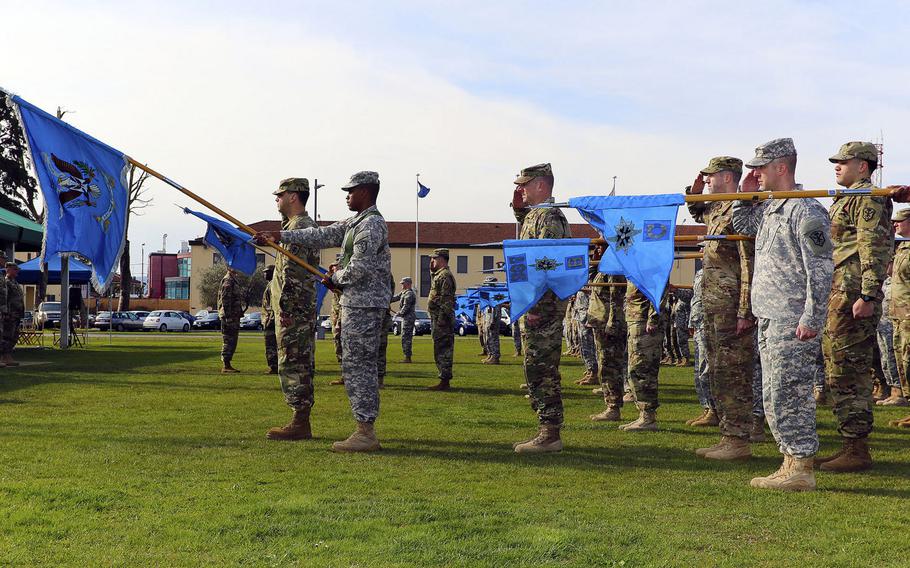 Military intelligence soldiers participate in the activation ceremony of the 207th Military Intelligence Brigade March 16, 2016, at Caserma Ederle in Vicenza, Italy. The 207th will serve as the Theater Intelligence Brigade for U.S. Africa Command and is under operational control of U.S. Army Africa. (Lance Pounds/U.S. Army)

VICENZA, Italy — The Army has stood up a military intelligence brigade in Vicenza to support operations in Africa and counter increasing security threats from the continent’s extremist groups.

The 207th Military Intelligence (Theater) Brigade was activated earlier this month at Caserma Ederle, which is home of U.S. Army Africa.

The new brigade headquarters, along with the 307th Military Intelligence Battalion, comprises assets from the 66th MI Brigade in Wiesbaden, Germany, according to a release from U.S. Army Africa. Another battalion belonging to the brigade, the 522nd MI Battalion, will be located in Wiesbaden.

The move is intended to provide dedicated tactical intelligence to support AFRICOM operations, according to an Army press release, on a continent destabilized by a number of militant Islamist groups. Those include al-Shabab in Somalia and Nigeria-based Boko Haram, which was ranked as the world’s deadliest terror group by the Global Terrorism Index in 2015 and has pledged allegiance to the Islamic State group.

Adherents of the Islamic State group have established a foothold in Libya, a growing concern for the U.S., which is targeting the group in Iraq and Syria.

The Army will also inactivate another unit attached to the 66th — the 1st MI Aerial Exploitation and Reconnaissance Battalion — as part of a plan for all AEBs to be managed by one aerial intelligence brigade. That brigade headquarters will be located in the U.S. to support global intelligence, surveillance and reconnaissance requirements, according to the release.

The moves will have no impact on U.S. European Command operations, according to the release, because the 66th positions going to Vicenza were already supporting AFRICOM.