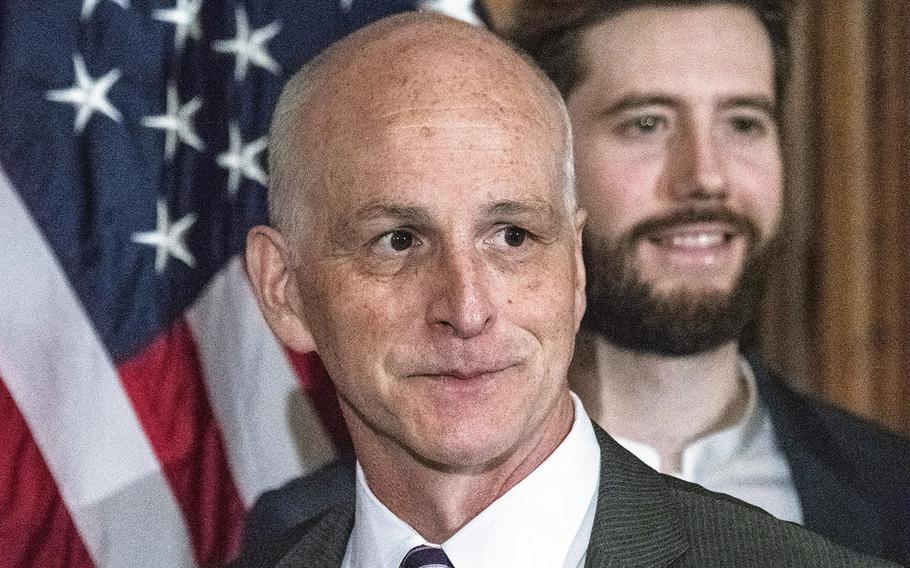 WASHINGTON – Rep. Adam Smith, a Democratic congressman from Washington state, was officially tasked Friday to take over as chairman of the House Armed Services Committee in a move that was widely expected under a change of power for the lower chamber.

Smith, who has already set a template for a Democratic tour de force on defense matters, such as ramping up congressional oversight of military operations, will now take over the House panel that helps shape policy and spending at the Pentagon, such as the annual defense budget.

“This is an extremely challenging time for our country and the world. We are in dire need of oversight from Congress and principled, coherent thinking on U.S. national defense strategy,” Smith said Friday in a statement. “The Armed Services Committee has a long track record of working in a bipartisan manner to advance U.S. national security policy, and I look forward to working with ranking member [Mac] Thornberry to make that happen.”

The House Democratic Conference chose Smith to lead the panel after Smith campaigned openly for the post in recent months. Democrats won control of the House following November’s midterm elections, which put all 435 seats in the lower chamber up for grabs. The 100-seat Senate remained under Republican control following the elections.

Smith on Friday reiterated a list of plans for the House Armed Services Committee, such as re-examining defense spending and ensuring an inclusive military as opposed to one that bans transgender personnel from serving, as has been supported by President Donald Trump.

Among his additional concerns, Smith also has said he would spearhead efforts to stop Trump from using military funds or servicemembers to build a wall on the U.S.-Mexico border by installing such a provision into future defense spending legislation and addressing the military’s unrealistic set of demands driving interests for a massive defense budget for fiscal year 2020.

“As chairman, I will work with my colleagues to promote transparency and congressional oversight, enhance military readiness, combat inefficiency and waste at [the Defense Department],” Smith added, as well as “advance green technology in defense and address the threat climate change poses to our national security, fight for an inclusive military, and move towards a responsible approach to nuclear weapons.”

Smith’s announcement to take over the House panel comes in a season of change on Capitol Hill as it launches into a new Congress this week. Aside from departures and new faces on the House Armed Services Committee, its Senate counterpart will also have a new look for the current meeting of the 116th Congress aside from its established leaders.

Sen. Jim Inhofe, R-Okla., will continue to lead the panel in the wake of the August death of its former chairman, Sen. John McCain, R-Ariz. Sen. Jack Reed, D-R.I., will remain the committee’s ranking minority member.

Lawmakers will have their plates full this session when it comes to defense issues. Congress has to contend with an acting defense secretary, Patrick Shanahan, who took over for former secretary Jim Mattis, who resigned following a dispute with Trump over the president’s decision to remove troops from Syria.

Though the Defense Department budget is set for late into 2019, its next spending plan remains a moving target. And with a split Congress angling for different budget priorities next year, it creates a new level of drama for the fiscal year 2020 budget.

The process for building the next budget, which begins Oct. 1, 2019, was thrown into confusion late last year when President Donald Trump suggested a 4.7 percent slash in spending for the Defense Department to $700 billion. It’s a figure that’s since fluctuated, with several iterations of up to $750 billion under consideration.

Also this year, lawmakers must address spending caps slated to return in 2020 under the Budget Control Act to decrease the defense budget to $576 billion, if no action is taken. Negotiations between the parties could be strained in light of the standstill in Washington over the partial shutdown.

The fate of an ongoing military buildup, war oversight, veterans affairs and decisions on who can enlist in the service will also now rest with the split Congress.

Democrats are also likely to fight a Trump-proposed spending spree for “low-yield” nukes, the creation of a new, costly “Space Force” military branch and support an ongoing push for legislation revamping the president’s war powers.

In an open letter to his Democratic colleagues last year declaring his interest to take over as chairman of the House Armed Services Committee, Smith said it was time for more vigorous oversight of the Trump administration and the Defense Department. He also said it was critical that servicemembers and their families continue to have access to quality benefits, assistance programs and medical care.

“Together, we have made strides on national security issues but much more must be done,” Smith said in the Nov. 8 letter asking for his colleagues’ support. Also, “it is important that we have a military that reflects the United States in all of its diversity as well as a Defense Department that engages with businesses of all sizes and from all communities.”