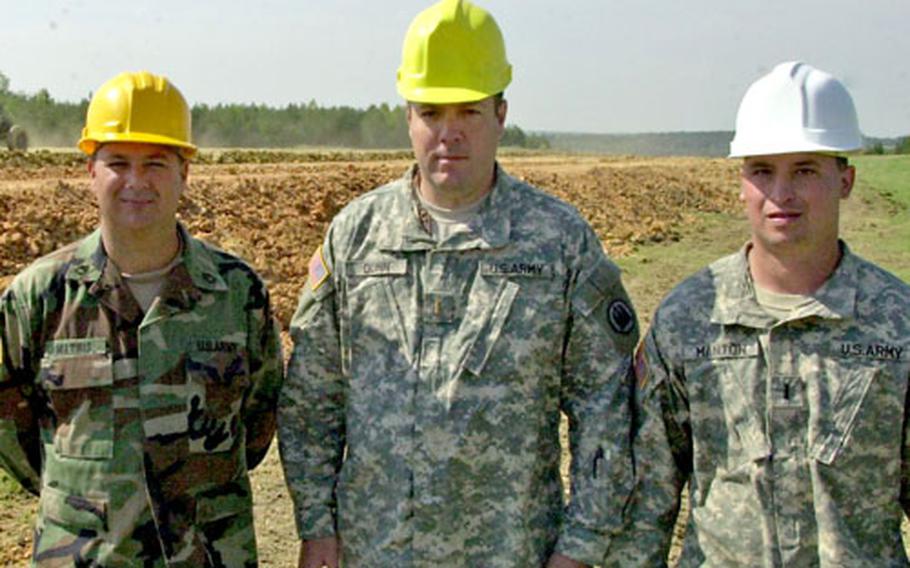 HOHENFELS, Germany &#8212; Unmanned aerial vehicles will soon have a new place to touch down here with the construction of a 300-yard UAV airstrip inside the training area.

The strip, inside &#8220;the box&#8221; &#8212; a 10-by-20-kilometer area where most of the training happens at Hohenfels &#8212; was designed for Shadow UAVs to use in inclement weather, according to Joint Multinational Readiness Center aviation planner Maj. James Faulkner.

The strip will be too short for the Hunter UAVs employed by the Hohenfels-based Company A, 1st Military Intelligence Battalion, which need a 2,000-foot runway to land safety, Company A Rear Detachment leader Sgt. 1st Class Joseph Benfit, 26, of Warrington, Va., said Tuesday.

But the strip will be big enough for landings by Shadow UAVs, which take off using pneumatic launchers, he said.

The Company A Hunters, which have been in Iraq with the unit since last November, will use Hohenfels&#8217; main post airfield when they return. The new airstrip in the box will be used by Shadows from other bases in support of units training at Hohenfels, Benfit said.

&#8220;Most of the units that go downrange to Iraq get UAV support sometime down there,&#8221; he said, adding that it made sense for them to work with UAVs during predeployment training at Hohenfels.

Soldiers from the Louisiana National Guard &#8212; fresh from six months in New Orleans rebuilding levies in the wake of Hurricane Katrina &#8212; are building the new airstrip under a reserve troop construction program that saves the Army $1.2 million on the cost of the project.

Second Lt. Alan Dunn, 33, of Company A, 205th Engineer Battalion out of Covington, La., said engineers moved 5,200 cubic yards of fill to form the airstrip, next to another Short Takeoff and Landing (STOL) airstrip that serves larger aircraft operating in the box.

In fine weather, UAVs will use the STOL strip, but when the ground is muddy they will be able to use the smaller airstrip, which will be coated in asphalt, he said.

Another 205th soldier involved in the project, surveyor Sgt. 1st Class Brett Mathis, 45, said he had worked on several conventional airstrips but this was his first UAV airstrip.

First Lt. Jackie Manton, 29, who was also involved in the project, said 16 engineers were involved, using two bulldozers, three scrapers and a grader.