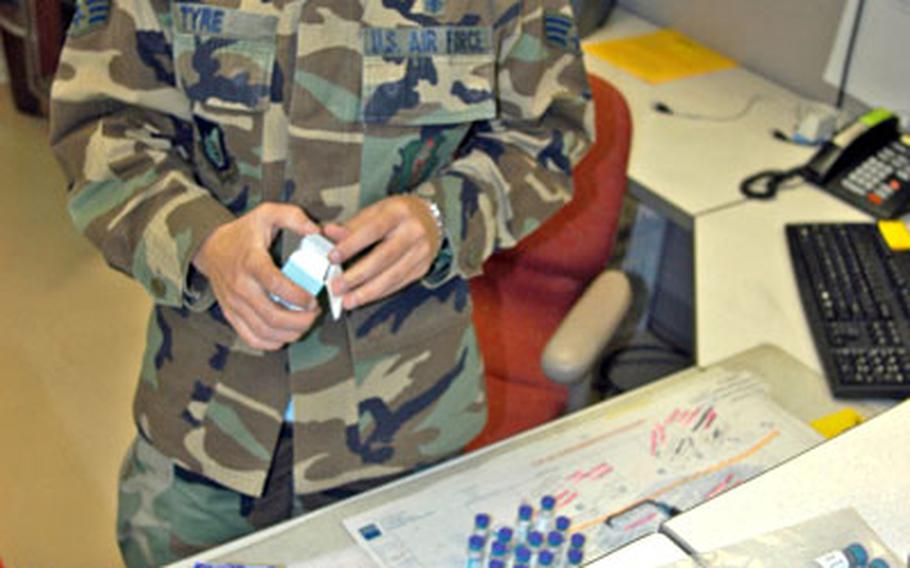 Senior Airman Kelley Tyre, a medical technician with the 35th Medical Group at Misawa Air Base, Japan, sorts through a shipment of the children’s hepatitis A vaccine. (Jennifer H. Svan / S&S)

MISAWA AIR BASE, Japan &#8212; In line with a new Centers for Disease Control and Prevention policy, U.S. military immunization clinics in the Pacific are recommending that all children be vaccinated for hepatitis A, starting when they are as young as 12 months.

A federal advisory committee to the CDC last October recommended that to prevent the liver disease, all children receive a vaccine between 12 and 23 months of age. The vaccine is a two-shot series, with the second shot to be given six to 18 months after the first.

Before the new advisory, Defense Department medical facilities in Japan stocked the hepatitis A vaccine in small quantities and administered it only to children 2 and older, if parents requested it.

They began stepping up hepatitis A shots earlier this year. But some places ran out or are running low on the vaccine, because it&#8217;s been in short supply from the manufacturer.

&#8220;We ran out in June. We&#8217;re just waiting&#8221; for more, said Tech. Sgt. Fred Woodruff, noncommissioned-officer-in-charge of the allergy and immunization clinic at Yokota Air Base, Japan. Parents will be notified by mail when the next shipment arrives, he added, noting that many Yokota children were able to get their first dose when the base began administering the vaccine in January.

A sailor at U.S. Naval Hospital Yokosuka&#8217;s immunization clinic said the base has a small supply of the vaccine and also is waiting for more.

Misawa Air Base in northern Japan also was out of the vaccine until last week, when 1,600 doses arrived by mail &#8212; enough to start giving most children on base their first dose, said Staff Sgt. Jason Peters, noncommissioned-officer-in-charge of the base allergy and immunization clinic.

Health-care officials said the shot is not yet required for enrollment in Department of Defense Dependents Schools or base day-care programs. &#8220;It&#8217;s just highly recommended,&#8221; Woodruff said, noting some states and schools in the U.S. require it.

A viral infection, hepatitis A can cause appetite loss, vomiting, nausea, fatigue and a yellowing of the eyes and skin, according to CDC information. It&#8217;s usually spread in households from person to person and in contaminated food and water. About 20,000 to 30,000 people in the United States are infected with the disease annually and about 100 die from it.

First available in 1995, the hepatitis A vaccine previously was recommended only for children living in states with elevated rates of the disease.

The latest recommendation to vaccinate all children was made in part because two-thirds of current hepatitis A cases were occurring in states in which the vaccine was not recommended for children, according to the CDC.

The vaccine can cause mild side effects such as redness, swelling and soreness around the shot area for several days, Peters said. A vaccine information sheet also notes that a serious allergic reaction is possible but rare.