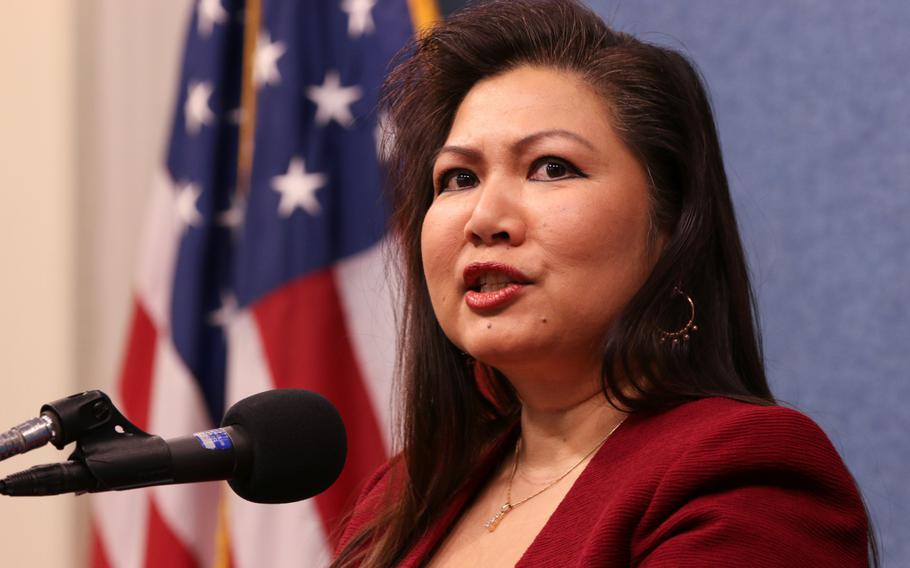 Lana McKenzie, chief medical executive for veterans service organization AMVETS, will spearhead a new suicide suicide-prevention initiative that aims to find veterans struggling with a mental health crisis and to get them treatment. (Michael S. Darnell/Stars and Stripes)

WASHINGTON — The veterans organization AMVETS announced an estimated $700,000 suicide-prevention initiative Tuesday to find veterans who could be struggling with a mental health crisis and get them treatment.

A six-person team of licensed registered nurses, called the HEAL team, will travel across the country to try to intervene with veterans who haven’t sought treatment through the Department of Veterans Affairs but need it, said Sherman Gillums, chief strategy officer with AMVETS. They’ll also take calls and emails from veterans facing barriers to VA mental health care.

Carolyn Clancy, the executive in charge of the VA health care system, said the effort could help reduce stigmas about the VA that keeps veterans from going there for help.

“I can’t overemphasize how important it is to have this kind of assistance on the frontlines connecting veterans to our services,” she said. “Having another veteran from another organization you can trust saying, ‘It’s OK, this is actually a good thing to go do,’ means far, far more than what anyone from the VA could necessarily share. It’s a different source of credibility.”

According to VA data, an average of 20 veterans died from suicide each day in 2014. Of the 20, 14 were not connected to VA services.

The VA has recently been attempted to get more veterans enrolled in mental health care. Last summer, the agency began providing urgent mental health care to veterans with other-than-honorable discharges – a group that was previously ineligible for the treatment.

President Donald Trump signed an executive order in January that paves the way for servicemembers to be enrolled automatically in VA mental health care for one year once they leave the military. VA Secretary David Shulkin said Tuesday during the AMVETS event that he would share specific plans about how the VA will implement the order with Trump this week.

The VA is also attempting to hire more mental health care providers, but the agency is having difficulty keeping jobs filled. In 2017, the VA hired 900 employees but lost another 945.

The AMVETS announcement also comes at a time of turmoil at VA headquarters, where divisions have emerged between Shulkin and White House appointees who want to see him removed. The rift became public following a watchdog report Feb. 14 that detailed findings of ethical violations by Shulkin and his former chief of staff during a European trip last summer. Major veterans organizations that met with Shulkin on Tuesday and White House Chief of Staff John Kelly last week continue to believe Shulkin’s job is not in jeopardy.

Shulkin spoke only briefly at Tuesday’s event, saying suicide prevention is his top clinical priority for the VA and that more needed to be done.

“It’s these types of collaborations that are going to have the biggest impact,” he said. “We know that mental health care saves lives.”