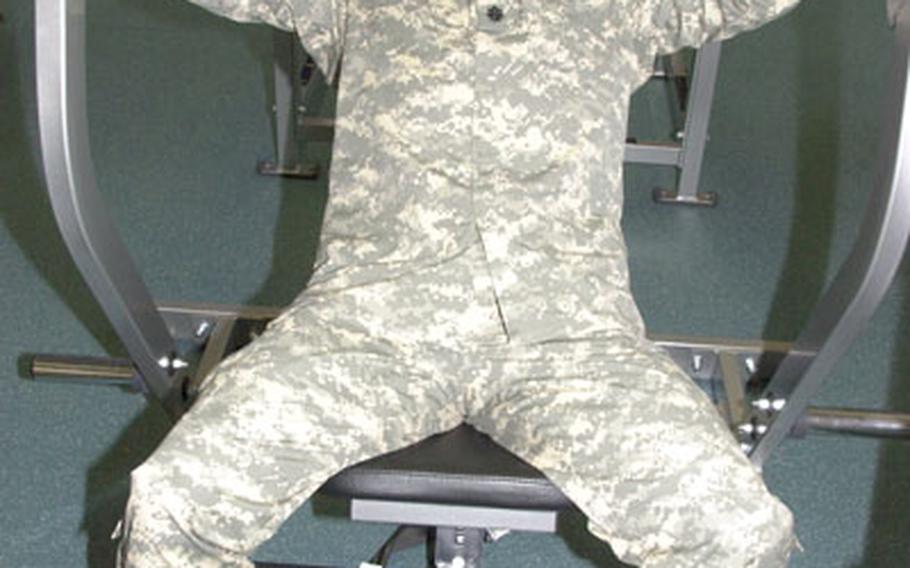 Lt. Col. John Bartolotto of the 3747th Multi Functional Training Brigade Europe, tries out some of the equipment at the $15 million fitness facility that opened Wednesday in Grafenwöhr, Germany. The state-of-the-art gymnasium marks the first milestone in a $700 million construction program to permanently accommodate a brigade’s worth of soldiers at the training area. (Seth Robson / S&S)

GRAFENW&#214;HR, Germany &#8212; A state-of-the-art gymnasium opened here Wednesday, marking the first milestone in a $700 million construction program to accommodate a brigade&#8217;s worth of soldiers at the training area.

The $15 million fitness facility is a gym rat&#8217;s delight and includes a sea of gleaming new weight machines and treadmills, rooms set aside for aerobics and martial arts, two basketball courts, an indoor running track and plenty of outside sports fields.

&#8220;This is the first big event,&#8221; in Efficient Basing Grafenw&#246;hr, a program to accommodate the arrival of a brigade-size element of soldiers and their families into the training area over the next few years, said Col. Margaret Burcham, commander of the U.S. Army Corps of Engineers, Europe District.

The sergeant major of the Army, Kenneth Preston, spoke at the gym opening and described the new facility as &#8220;totally awesome.&#8221;

&#8220;The fitness facility really sends a message to soldiers and their families about how we want to take care of them,&#8221; he said.

Klaus Gerstendorff, German State Construction Office chief for Grafenw&#246;hr, said people using the gym would find no decoration &#8212; just everything they needed to work out.

Spc. George Morgan, 30, of Trussville, Ala., helped cut a ribbon to open the new gym.

The 41st Transportation Company soldier, who recently returned from a year in Iraq, said he was looking forward to using the fitness center.

The stocky soldier, who bench-presses more than 250 pounds during a typical gym session, said he spent a lot of time working out in Iraq.

Lt. Col. John Bartolotto, 44, of Miller Place, N.Y., was one of the first to try out the new weight room at Grafenw&#246;hr. Bartolotto, who serves with the 3747th Multi Functional Training Brigade Europe, had no trouble incline-pressing 100 pounds several times.