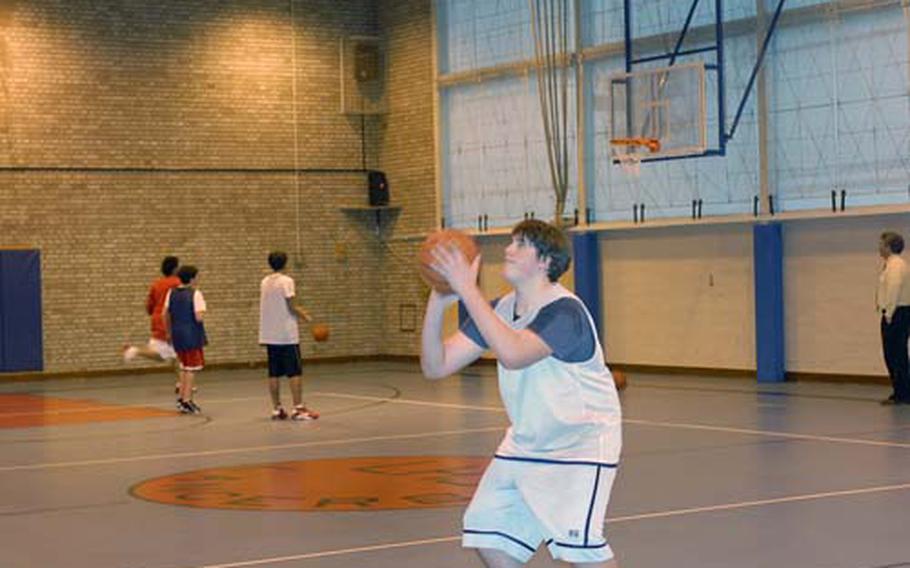 Lakenheath High School freshman Paul Federinko works on his shooting during practice last week. At 6 feet, 4 inches tall and 240 pounds, Federinko is the biggest player on the Lancers hoops squad. He helped Lakenheath beat Kaiserslautern in his second game with the varsity team. (Mark Abramson / S&S)

Opponents are finding out that defending against Lakenheath super frosh Paul Federinko is no easy feat.

Although Federinko may be just a baby by basketball standards &#8212; having only played about a half-dozen games at the varsity level &#8212; he is a monster of a man at 6-feet, 4-inches tall and 240 pounds. His brother, junior Alex, is a forward on the team.

When Federinko isn&#8217;t defending in the post during the basketball season, he spends his time playing offensive line for the Lancers&#8217; varsity football squad.

Federinko was promoted to the varsity hoops team last month, and he had an instant impact by scoring the game-tying basket as time expired against Kaiserslautern. He sank the game-winning free throw when he was fouled on that shot.

"For a freshman to step up and hit that, that was big," coach Alan Campbell said about the game-tying shot. "I told him that should not be the highlight of his career."

Federinko credited his heroics against K-town to his being focused and being able to tune out the crowd.

"It was just me and the hoop," the soft-spoken Federinko said.

Federinko admits he still has a lot of work to do on the court to excel at the varsity level, but he said he feels he has made great strides. He said he felt a little lost in his first varsity game against Ramstein, and he knows he is going to get schooled at times by more experienced competition.

"It&#8217;s much more quick and fast-paced compared to JV," he said. "I think I have progressively gotten much better. I would like to improve my stamina."

Federinko claims that learning to be aggressive on the football field has helped his hoops game. Football used to be his love, but now it is a toss-up between the two sports, he said.

This off-season, he plans to improve his game by working on his jumping skills. Federinko said he can jump high enough to touch the rim, but he wants to be able to dunk.

Campbell described Federinko as a work in progress but an asset for the team as well.

"He is the closest thing we have to a center," Campbell said. "He is still developing. He understands what we are trying to do. I think he is very teachable and very coachable.

"He is just a big athlete. To be that big this young, he has had some growth spurts."

Campbell added that Federinko is far from being a finished product, but that "he is the kind of athlete we needed. I would love to have four years with him."