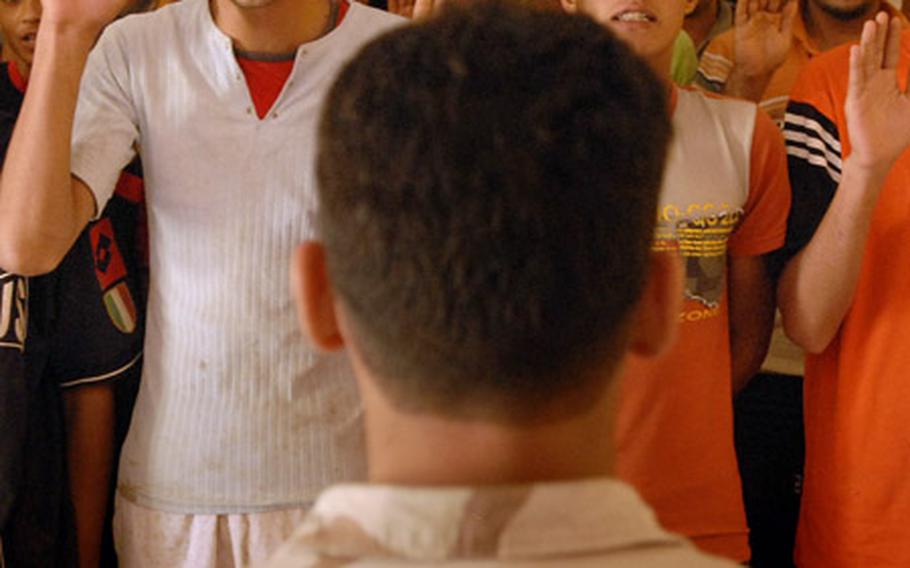 More than 50 men from Jamilla pledge an oath of loyalty during a graduation ceremony for the newly formed “Neighborhood Guard” at Forward Operating Base War Eagle. The group is envisioned as similar to the “Sons of Iraq,” which commanders say has helped secure numerous communities across Iraq. (Ben Bloker / S&S)

More than 50 men from Jamilla pledge an oath of loyalty during a graduation ceremony for the newly formed “Neighborhood Guard” at Forward Operating Base War Eagle. The group is envisioned as similar to the “Sons of Iraq,” which commanders say has helped secure numerous communities across Iraq. (Ben Bloker / S&S) 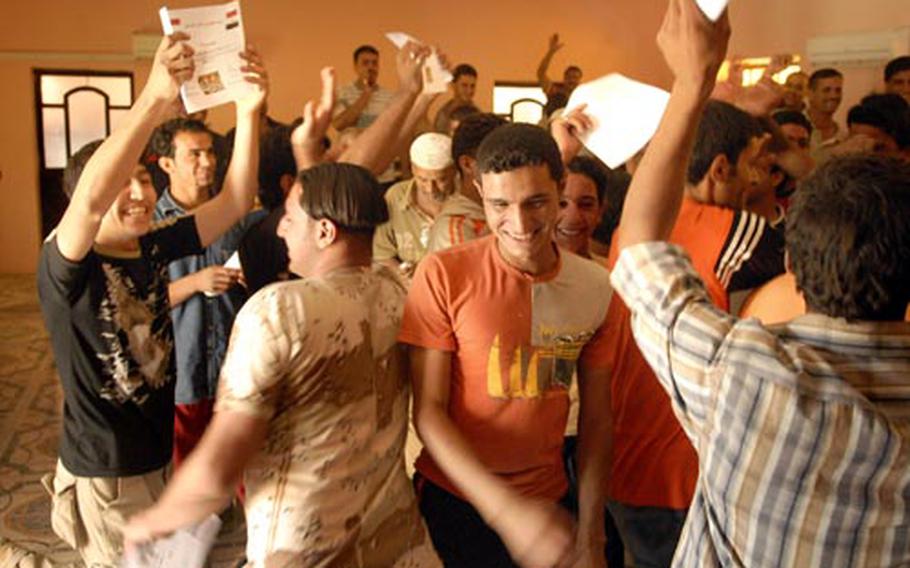 Young men dance and chant, waving their certificates at the end of a brief graduation ceremony for the newly formed “Neighborhood Guard” on Wednesday at the U.S. Army’s Forward Operating Base War Eagle. More than 50 men from Jamilla graduated from a three-day training course for the program, which is similar to the “Sons of Iraq.” (Ben Bloker / S&S)

SADR CITY, Iraq &#8212; Ihmad Abed Alkrem, a 23-year-old without steady work, said he wants to help take his city back.

Instead of relying on coalition forces to secure his neighborhood, the time has come to do it themselves, says Alkrem, who lives in the Jamilla section of Sadr City.

"Yeah, we want them to go," Alkrem said, referring to the U.S. Army presence in his city.

This past weekend, Alkrem and about 50 other residents of Jamilla were to take to the streets for their first day on the job as members of the newly formed "Neighborhood Guard."

After three days of training at the U.S. Army&#8217;s Forward Operating Base War Eagle, the young men are now being paid by coalition forces to work as members of the first neighborhood watch-style group in Sadr City.

In the coming weeks, hundreds more residents will be cycling through FOB War Eagle to get trained up for guarding checkpoints throughout the Jamilla district, which is south of the new security wall that cuts across Sadr City.

Members of the "Neighborhood Guard" earn about $300 a month, a solid income in northeastern Baghdad. Their job is to man checkpoints and keep an eye out for outsiders and troublemakers. U.S. officials distributed several dozen seized assault rifles to group members who did not have their own weapons.

The initiative is similar to the "Sons of Iraq" program, which commanders say has helped secure numerous communities across Iraq. The difference between the "Sons of Iraq" and "Neighborhood Guard" is in name only. Creating a new name was necessary in Sadr City, a Shiite enclave of some 2 million people.

In the weeks ahead, Eifler expects to have 1,000 Guard members controlling checkpoints in the Jamilla area.

In an area where there is little local law enforcement, Eifler says, the "Neighborhood Guard" will play a key role in bolstering security.

With a security presence made up of local residents, the Iraqi Army will be freed up to focus on other trouble spots, Eifler said. Coalition forces also can play a less prominent security role.

Still, questions remain about the long-term viability of "Neighborhood Guard"-style programs. The Iraqi government doesn&#8217;t recognize or fund the organizations. And officials have acknowledged the dangers of recruiting former insurgents into groups designed to even-handedly promote security.

"The hope is that they eventually get wrapped up into the (Iraqi Security Forces)," Newcomer said.

At the moment, however, there is no clear plan for how members of SOI-type groups will be folded into organizations such as the Iraqi Police.

The new "Neighborhood Guard" members will be taking up positions across the Jamilla section of Sadr City each week as newly trained members enter the field. Right after one three-day training course finishes, another will start right up, Eifler said.

The first members graduated last week. Just before they received their certificates, some of the men talked about their motives for joining the "Neighborhood Guard."

"If I see anybody who wants to put a bomb in my street, I will kill him," boasted one of the young men.

Alia Krem Gerfer, a 25-year-old mechanic, was more reflective. He says people are tired of all the killing and want change.

"I want to move freely in my city," he said.

Everyone seemed to agree that the job and salary were good.

After taking an oath of loyalty, right hand raised, the new members received their graduation certificates. When it was all over, the men broke into celebratory chants and danced in a circle.