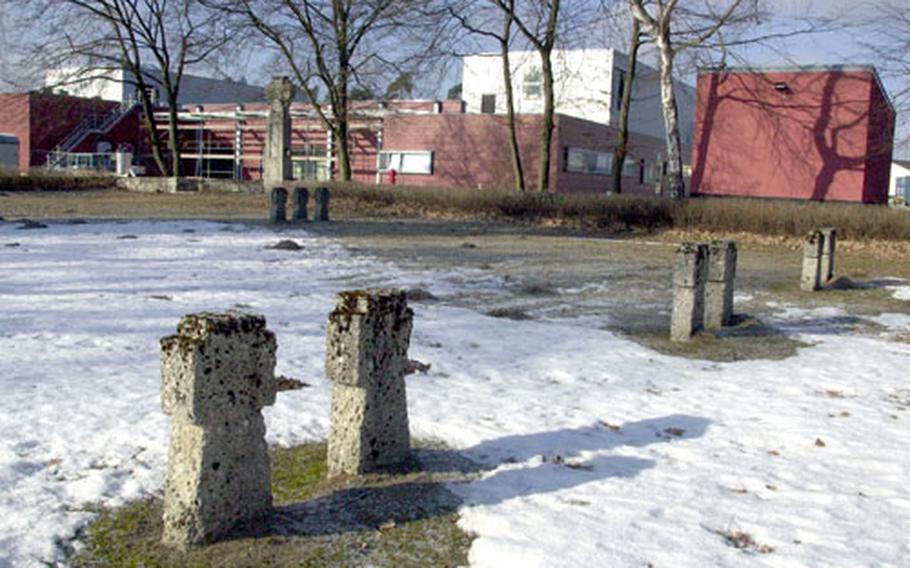 A $7 million dining facility will open in July next door to a cemetery for prisoners of war who died at Grafenwöhr, Germany, during World War I. (Seth Robson / S&S)

GRAFENW&#214;HR, Germany &#8212; Later this summer, a $7 million dining facility is scheduled to open just a few yards from the graves of hundreds of prisoners of war who died here during World War I.

Efficient Basing Grafenw&#246;hr spokeswoman Susanne Bartsch said the chow hall will feed up to 1,800 soldiers at one time.

The cemetery has only a few stone crosses and tombstones left, but there is a large stone monument next to the chow hall with the inscription &#8220;1914-1918.&#8221; Historical records at Grafenw&#246;hr Military Museum indicate 23,600 POWs from Britain, Australia, France, Morocco, Italy, Russia and Romania were detained at Grafenw&#246;hr during World War I.

According to the museum&#8217;s curator, Olaf Meiler, many of the prisoners were seriously wounded and some were dead on arrival at Grafenw&#246;hr. A large POW hospital once stood on land that is now a grassy field in front of Grafenw&#246;hr&#8217;s headquarters building, he said.

Most of the Grafenw&#246;hr POWs were French or Russian. French and Italian prisoners lived in sheds that stood where a new post exchange is under construction. British POWs lived in artillery barracks nearby, while the Russians and Romanians lived in wooden buildings, demolished years ago, south of the Main Post.

By and large, the Grafenw&#246;hr POWs were treated well, Meiler said.

The museum&#8217;s collection includes photographs of POWs playing sports and working under the watchful eyes of German guards in spiked helmets. A picture of a POW&#8217;s room shows they had photographs on their walls and musical instruments to play.

POWs were put to work digging for peat, digging drains and building a narrow-gauge railroad in the training area or helping farmers off-post, he said.

He describes his medical treatment for a paralyzed foot, Red Cross packages and letters from his parents, late-night sing-alongs and practical jokes played on British and French POWs.

Before the war ended, Durham was released to Switzerland as part of a swap of disabled POWs, Meiler said.

The POW cemetery, which was created in 1914, once had 755 graves and covered a large patch of land next to where the new chow hall stands. The French disinterred more than 300 of their dead, taking them to Sarrebourg in the French province of Lothringia in the 1920s. British and Italian POWs&#8217; remains were also repatriated, historical records show.