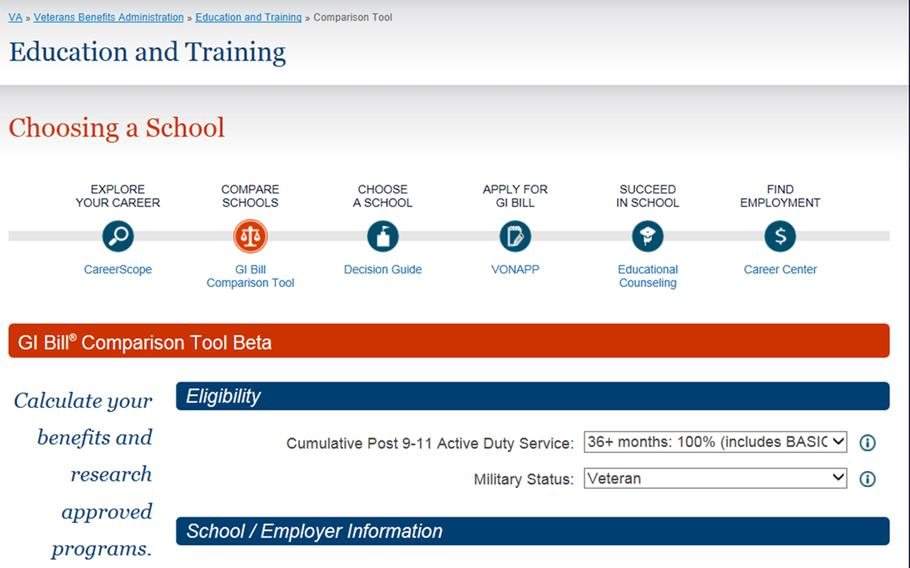 The Department of Veterans Affairs has launched a new tool to help servicemembers, veterans and their families calculate Post-9/11 GI Bill benefits and compare schools and training programs nationwide.

The GI Bill Comparison Tool brings together information from more than 17 online sources and three federal agencies and seeks to provide key information about costs and quality of education.

The comparison tool was developed in response to President Barack Obama’s Executive Order 13607 of April 27, 2012, which instructed agencies to establish standards for educational institutions that interact with servicemembers, veterans and their families, provide information on the costs and quality of institutions and programs, prevent deceptive recruiting practices and provide quality academic and student support services, according to a VA statement announcing the launch of the program.

The order was preceded by years of predatory practices in which institutions and programs failed to deliver on educational promises, leading many in Washington to suggest that large amounts of benefit dollars were being wasted.

The VA still has to work out some bugs with the new site, but customers will be able to calculate and even apply for their benefits, take an interests-and-aptitudes assessment, compare schools and programs, peruse careers and job opportunities and have access to counseling services.

Users also will be able to compare the number of students receiving VA benefits at each school.

In addition to calculating benefit funding, the tool also shows how much users can receive for books and living stipends and whether the school in question participates in the VA’s Yellow Ribbon Program, which helps students avoid out-of-pocket tuition and fees that may exceed the Post 9/11 GI Bill tuition benefit. The tool also shows how the school compares to others in graduation rates and financial aid, according to a statement from the Veterans of Foreign Wars, who along with Student Veterans of America and the American Legion have worked closely with the White House and legislators on initiatives such as the comparison tool.

Coy also said that the VA will add functionality in the future, such as the ability to compare up to three schools side-by-side.

“By offering student veterans better comparison information, we help them to choose the right schools and programs that match their goals,” VFW National Commander William Thien said in the statement. “In the past, veterans who wanted to use their GI Bill educational benefits would have to search through three different government agencies to find all of the information they can now find in a few simple clicks on the new Department of Veterans Affairs comparison tool.”

The launch was also applauded by college and university representatives.

“We’re very supportive of the comparison tool,” said Michael Dakduk, vice president of military and veterans affairs for the Association of Private Sector Colleges and Universities, a voluntary membership organization of accredited, private, postsecondary schools, institutes, colleges and universities. “It will allow military veterans to choose the institution that best fits their needs.”

The comparison tool comes on the heels of the VA’s launch last week of a secure online GI Bill complaint system to report fraud, waste and abuse. That website is designed to collect feedback from servicemembers, veterans and their families on issues they might be experiencing with educational institutions that receive funding from federal military and veterans benefits programs such as the GI Bill and tuition assistance.

The Post-9/11 GI Bill is an educational benefit program created by Congress in 2008. Veterans and servicemembers are generally eligible if they have served on active duty for 90 or more days since Sept. 10, 2001. The VA has dispersed more than $30 billion in tuition and education-related payments to more than 1 million servicemembers, veterans and their families since 2009, the VA statement said.