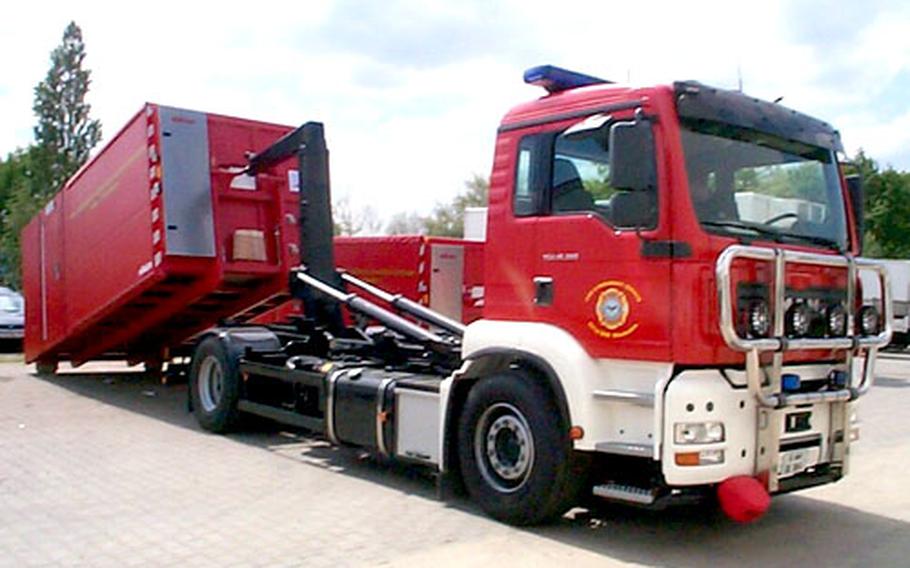 Army fire departments across Europe are receiving new trucks and equipment that officials say will improve emergency response capabilities in the event of a crisis, whether natural or man-made.

Wiesbaden was one of two communities to get the new vehicles and emergency-response containers. The other community was Miesau. Mannheim already had the truck and has now received the containers.

Eleven other fire departments have received tilt-hook trucks and three more are due to receive theirs within the next few months.

&#8220;Instead of having regular firetrucks and other special purpose, low-use vehicles, the tilt-hook trucks can be tailored with separate containers with water for firefighting or the equipment for situations involving hazardous materials or weapons of mass destruction or rescue missions,&#8221; Sigurd Mack said in a news release by Installation Management Agency-Europe.

The flatbed trucks come equipped with electronic cranes that can swap out containers depending on the incident, said Mack, the IMA-E fire protection specialist.

The approach gives Army fire departments the flexibility to rapidly adapt to any crisis.

Mack said the upgrade will save the Army roughly $50,000 per container when compared with the cost of acquiring the traditional response vehicles.