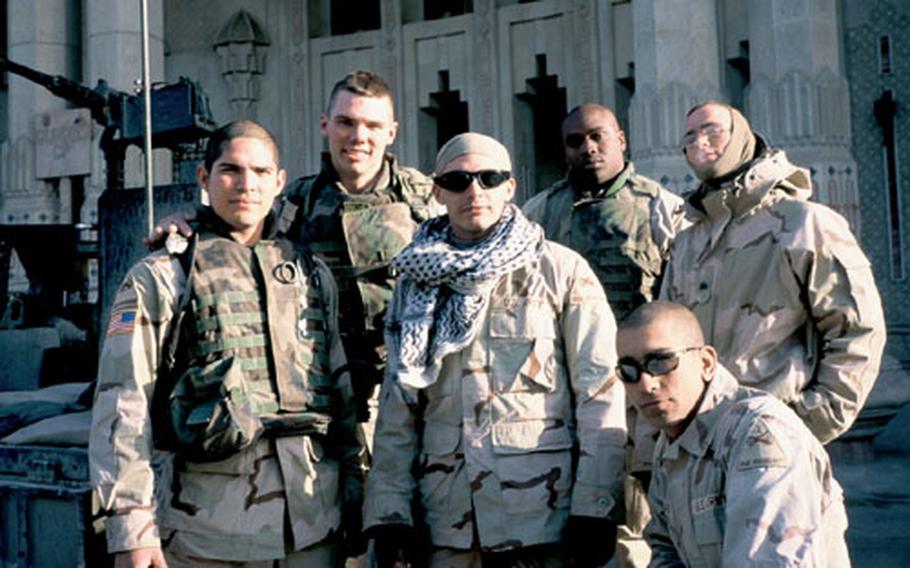 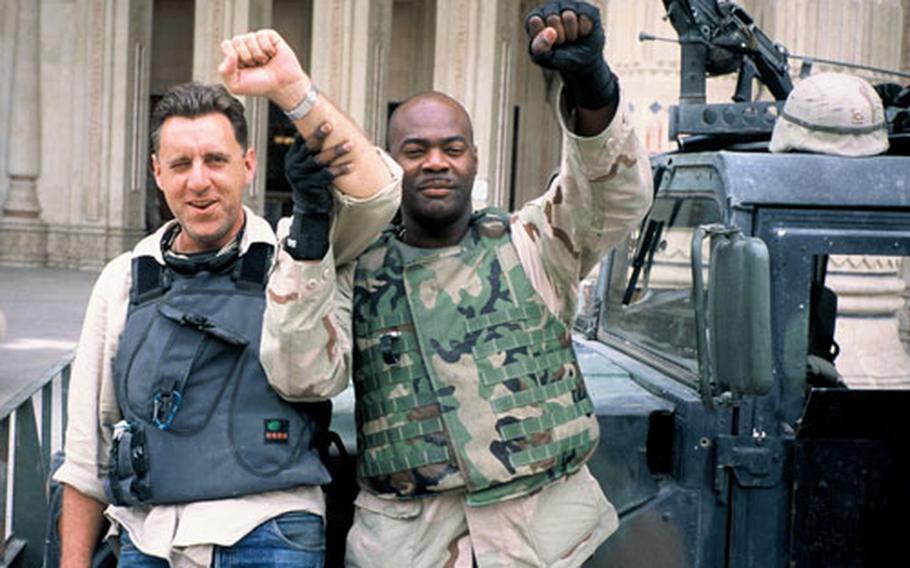 Independent filmmaker Michael Tucker poses for a photo with Sgt. Cedric Edwards of the 2nd Battalion, 3rd Field Artillery, outside one of Saddam Hussein&#39;s palaces in Al-Adhamiya, Iraq. (Photo courtesy of Michael Tucker)

The Berlin-based documentary maker asks why America doesn&#8217;t seem to care about the Iraq war or the American soldiers who are fighting it.

Tucker, a Seattle native, has channeled his obsession into &#8220;Gunner Palace,&#8221; the first feature-length film about the Iraq war; a film that he says is from the perspective of the soldiers themselves.

The movie is set to open Feb. 11 in six U.S. markets, then expand the following week to 15 markets. Tucker said he hopes to have pre-release screenings next month at major U.S. posts, such as Fort Bragg, N.C., and Fort Drum, N.Y., but those plans are not yet complete.

Tucker spent a total of two months between September 2003 and April 2004 living with the unit at what soldiers call &#8220;Odai&#8217;s Love Shack,&#8221; a partially bombed-out palace on the Euphrates River where Saddam Hussein&#8217;s son, Odai, brought paramours for trysts.

The regiment set up headquarters at the palace complex, which they nicknamed &#8220;Gunnerland,&#8221; while patrolling Al-Adhamiya, one of the most volatile sections of Baghdad. Tucker accompanied soldiers on countless missions and simply hung out with the troops. He said that left him with a sympathetic view of his soldiers that strongly runs counter to an image colored by soldiers&#8217; abuses of Iraqi captives at Abu Ghraib prison.

He did see, over time, mounting frustration among troops over the language barrier, and the fatigue of working nearly around the clock.

Gunnerland was a world between the reality of raids and attacks and the &#8220;real&#8221; world via the Internet, phones and the media, Tucker said. There were the funny moments, when soldiers would pull up to find suspects conveniently waiting to be caught, and darker moments when the U.S. troops rammed Humvees into houses, only to find out they had the wrong targets, he said.

Tucker said his goal is to show Americans &#8212; without being voyeuristic, political or patronizing &#8212; a world that he finds inspiring and terrifying.

It is, said Tucker, art out of pain.

It was painful getting to know and respect soldiers and officers such as Sgt. Maj. Eric F. Cooke and 1st Lt. Ben Colgan before they died in separate attacks, he said.

The film is, he said, an accurate depiction of daily life made by a filmmaker given extraordinary access by Lt. Col. Bill Rabena, the battalion commander. Attempts by Stars and Stripes to reach Rabena were unsuccessful.

&#8220;People always ask me if there was censorship; if I had trouble getting access and all those issues,&#8221; Tucker said.

Instead, he said, he had unrestricted access to soldiers in their off hours, to all missions and even to interrogations of suspected Iraqi insurgents. &#8220;They embraced your being there,&#8221; Tucker said. &#8220;People just want their story told.&#8221;

Whether the regiment&#8217;s soldiers will be able to go to the local base theater to watch themselves on the big screen remains unclear. Army and Air Force Exchange Service executives say that&#8217;s unlikely, unless a major distributor with whom AAFES has a contractural relationship picks up the film, and it goes into wide release, said Judd Anstey, media branch manager at AAFES headquarters in Dallas.