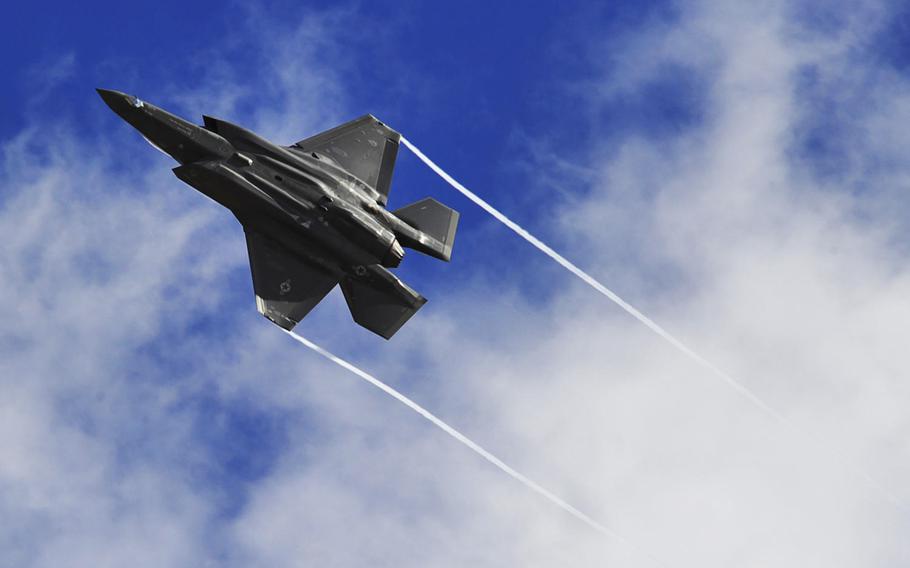 An F-35 Lightning II performs a maneuver over Luke Air Force Base, Ariz. The planes will start arriving at RAF Lakenheath in England in 2021, and work will begin soon on remodeling buildings to accommodate new squadron operations and maintenance facilities and a flight simulator. (Devante Williams/U.S. Air Force)

RAF LAKENHEATH, England — Work on remodeling a central compound is expected to begin soon at RAF Lakenheath for the F-35 Joint Strike Fighters slated to begin arriving in 2021.

The U.S. Air Force in January 2015 announced RAF Lakenheath as its first base for the F-35 in Europe. The two squadrons of 54 F-35s will operate alongside two squadrons of F-15E Strike Eagles and a single unit of F-15Cs currently based there.

“We’re on track to bed down the F-35 here in the United Kingdom,” Col. Evan L. Pettus, commander of the 48th Fighter Wing at RAF Lakenheath told Stars and Stripes Monday. “RAF Lakenheath offers a combination of several advantages: We have close partnerships with the United Kingdom who will also be operating the F-35, we have fighter jet experience, we have the room and a good training space.”

While the current airfield won't be altered, new construction is planned for a squadron operations and maintenance facility and an F-35 training simulator. Some of the ramps will be extended and existing support facilities are receiving upgrades.

The new facilities are designed not only for the incoming F-35s but also the 1,200 airmen who will accompany them.

Missions will continue as normal even after construction crews break ground, Pettus said.

“Current operations continue unabated,” he said. “We are capable as construction begins of manipulating our flow on the airfield so we’ll be able to train and maintain our readiness without interruption.”