New face at the helm of 5th Signal Command Brig. Gen. Jeffrey G. Smith Jr. says farewell to the Wiesbaden and 5th Signal communities Monday during a ceremony at Wiesbaden Army Airfield. Smith assumed command of 5th Signal in 2008 and will next head to Fort Belvoir, Va., where he will assume duties as the deputy commanding general for proponency at U.S. Army Cyber Command. (Mark Patton/Stars and Stripes) 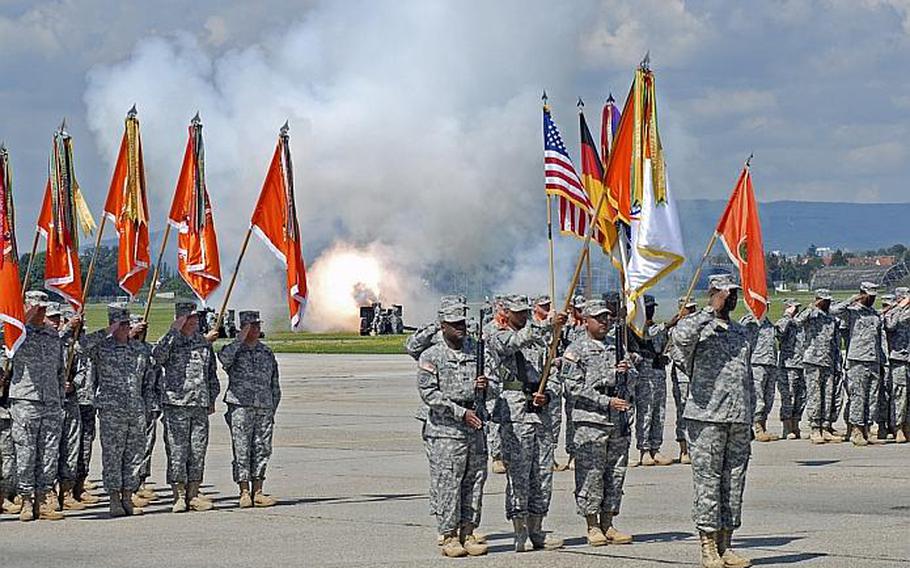 Soldiers from the 5th Signal Command perform salutes as cannons fire in the background. Col. Bruce T. Crawford took the reins of 5th Signal Monday during a ceremony at Wiesbaden Army Airfield. (Mark Patton/Stars and Stripes)

WIESBADEN, Germany &mdash; The three skills every soldier learns during basic training are how to shoot, move and communicate. The third of those skills was on the minds of hundreds gathered Monday at Wiesbaden Army Airfield as Col. Bruce T. Crawford took the reins of 5th Signal Command.

The command, with more than 3,000 troops and civilian workers, is the Army&rsquo;s largest theater signal command and serves as the main network provider for U.S. Army Europe, U.S. Africa Command and U.S. European Command.

Crawford arrives to 5th Signal from Washington, D.C. where he most recently served as the coordination group director for the Office of the Chief of Staff of the Army. Fifth Signal spokesman Kristopher Joseph said Crawford should be promoted to brigadier general in the near future.

&ldquo;I want to make sure the stakeholders have a say,&rdquo; said Crawford of the 5th Signal&rsquo;s future. Crawford said he plans to establish a dialogue soon with the command&rsquo;s customer base as well as with the 5th Signal soldiers and family members.

The Department of Defense announced in April that Brig. Gen. Robert S. Ferrell would be Smith&rsquo;s successor at 5th Signal, but Ferrell said that the Department of the Army later decided that he should stay put at AFRICOM, where he serves as director for command, control, communications and computer systems.