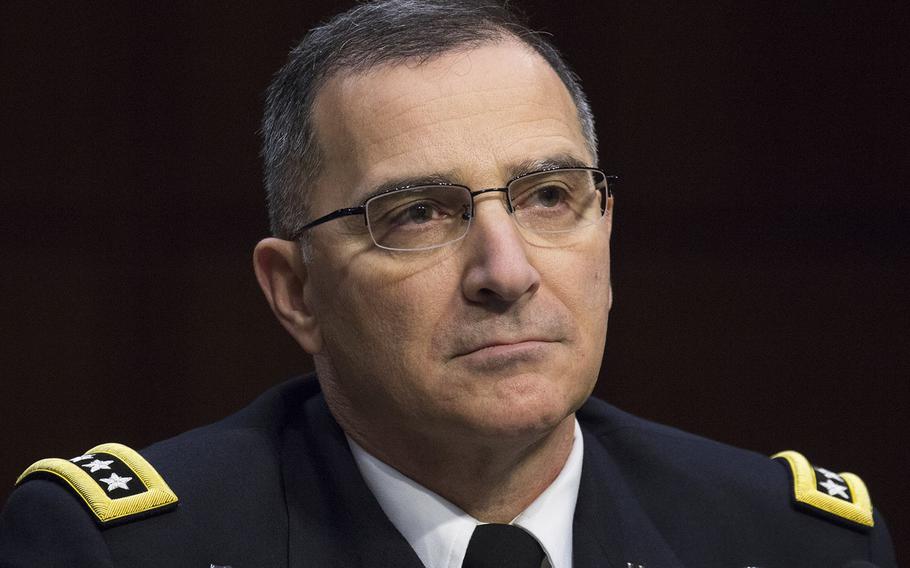 Buy Photo
Gen. Curtis M. Scaparrotti, commander of U.S. European Command and NATO’s supreme allied commander, said Saturday, July 9, 2016, in Warsaw, Poland, that EUCOM needs to strengthen its posture in the air and at sea as it seeks to transform itself into a headquarters capable of leading in a conflict. (Joe Gromelski/Stars and Stripes)

WARSAW, Poland — U.S. European Command needs to strengthen its posture in the air and at sea as it seeks to transform itself into a headquarters capable of leading in a conflict, EUCOM’s Gen. Curtis M. Scaparrotti said.

During the Warsaw meeting, allies took a series of steps designed to enhance NATO’s presence in eastern Europe. Much of the work centered on positioning ground forces near the border with Russia, placing four multinational battalions in the Baltics and Poland, where the U.S. Army will send about 1,000 troops. Scaparrotti hailed the measures as a sign of how NATO has pivoted to a position of deterrence, but added that more steps are needed given concerns not only about Russia but also unrest to the south.

“We have to take a look at our posture, not only on the ground but in the air and at sea as well,” said Scaparrotti, who also serves as NATO’s supreme allied commander.

During the meeting, the 28 alliance heads of state — joined by the prime minister of tiny Montenegro, which becomes a member next year — dealt with the dual challenge of shoring up the alliance's defenses in the east while recommitting to the 15-year war in Afghanistan and expanding its role in the U.S-led coalition against the Islamic State in Iraq.

“This is a pivotal moment for our alliance,” U.S. President Barack Obama said at the end of the summit. “In the nearly 70 years of NATO perhaps never have we faced such a range of challenges all at once — security, humanitarian, political.”

Allies agreed to extend the alliance’s training mission in Afghanistan into 2017 and pledged to continue funding the Afghan military through 2020.

The chief concerns for NATO are continued progress among Afghanistan’s roughly 352,000 Afghan military and police forces in areas where they’ve developed very slowly such as intelligence, command and control, aviation and logistics.

“The Afghans are fighting. They are much more capable now than they were when I came into office. But they still need support — because it’s really tough territory,” Obama said.

Afghan troops continue to take high numbers of casualties as they combat Taliban insurgents largely in the country’s south and east. Last year, their first year leading the fight, they suffered their highest casualties of the war.

Maintaining NATO’s presence of more than 12,000 troops will ensure training would continue at the corps and ministerial level.

NATO also will send trainers to Iraq to work directly with Iraqi forces and will provide AWACS surveillance aircraft to assist the coalition in the fight.

In the south, allies will increase support for European Union naval operations in the Mediterranean, an effort intended “to stop arms traffickers and go after criminals that are exploiting desperate migrants,” Obama said.

NATO still must detail how it will support such efforts in the Mediterranean.

In eastern Europe, the U.S. will take the lead in Poland when it establishes a battalion of troops as part of NATO’s four-battalion plan that will send units led by Canada, United Kingdom and Germany to the Baltic states. In addition, the U.S. will set up a brigade headquarters in Poland, which is part of a plan that involves annual rotations of a U.S. brigade to Europe starting next year.

“The four battalions will be multinational battalions, meaning that they will send a very clear message — that an attack on one ally will trigger the response from the whole alliance,” NATO Secretary-General Jens Stoltenberg said during the summit.

Poland welcomed the development as a sign that NATO takes the concerns of its eastern members seriously.

“We will have a real allied force deployed in our territory, who will stand ready at any point in time to protect the territory of Poland,” President Andrzej Duda said.

NATO plans are part of the alliance’s largest reinforcement since the end of the Cold War. A series of steps over the past year have included doubling the size of NATO’s rapid response force to 40,000 troops. Out of that unit, NATO also has carved out a 5,000-strong “spearhead” force that can quickly respond to crises.

Still, Western security analysts and military officials talking on the sidelines of the summit expressed concern about capability gaps in a region where Russia possesses an advantage in terms of geography and manpower. Russia has insisted it has no designs on NATO territory, but allies, especially Poland and the Baltic states, remain unconvinced.

Mike Carpenter, the Pentagon’s deputy assistant secretary of defense for Russia affairs, said allies must look at ways to enhance NATO’s maritime position in the Baltic and Black seas and address insufficient air defense capabilities in places like the Baltics and Poland. And it can’t be all done by the U.S., he said.

“I think it is incumbent on the alliance to go beyond just relying on U.S. capabilities,” said Carpenter.

In the case of EUCOM, Carpenter said the command is making a needed transformation in a “warfigting” headquarters.

Such a transformation could mean rebuilding EUCOM command-and-control capabilities to lead in a war, a skill set abandoned during an era of post-Cold War calm.

“We have to be able to do some things that the headquarters two or three years ago didn’t have a requirement to do,” said Scaparrotti, who assumed command in May.