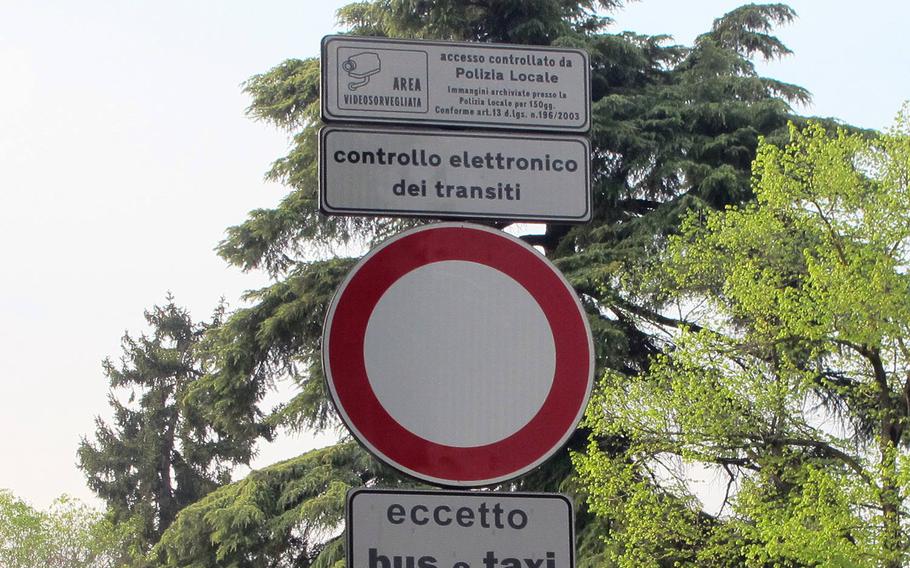 Buy Photo
Traffic cameras are ubiquitous in Vicenza and contribute to the majority of tickets for speeding, rolling through stop signs and entering restricted areas. The tickets can take months or years to arrive and the fines can be steep. (Nancy Montgomery/Stars and Stripes)

VICENZA, Italy — Pop quiz time. A servicemember drives to work here every day for a week at 62 mph on a stretch of road with a 56 mph limit and cameras. A year later, she’s notified that she owes $979 for five speeding tickets.

Plus, while lost, she unwittingly drove into restricted zones three times over the past 18 months, also caught on camera, for three more tickets totaling $221. How much does the servicemember owe?

C: It depends on how long it’s been since officials identified her as the driver.

D: Nothing. She’s out of here.

The correct answer, according to officials with U.S. Army Garrison Italy, could be any of the above other than D.

Italian authorities recently complained that Americans covered by the U.S.-Italy status of forces agreement weren’t paying or even responding to their tickets. About a month ago, the garrison began working with the Carabinieri to make a cumbersome ticketing notification and fine collection process more efficient.

As a result, some on base said they’re receiving hundreds or thousands of euros in ticket fines at once.

“We have to be good neighbors to the Italian community and pay our debts,” said Master Sgt. Joshua Tolbert of the garrison’s provost marshal office. “First, we’d like people not to speed and break the law.”

Fines can be hefty. Speeding from 11 to 40 kilometers per hour over the limit, for example, brings a penalty of between 173 to 695 euros, or $196 to $786. By contrast, penalties for the same offenses in Germany start at 20 euros and top out at 200 euros, according to the German legal journalism site bussgeldkatalog.org.

The results of the garrison’s new process were evident on Facebook. “They are issuing me 62 TICKETS from 2017-2018 they ‘lost in the system,’” one woman wrote on the Army Wives Caserma Ederle page. “Paid over 2,496 euro!”

Some wrote that having to pay fines they’d just learned about within five days to get a 30% discount was coercive.

“We’re not unsympathetic,” Tolbert said. “But it’s their (Italy’s) system.”

Authorities have 360 days once a foreign motorist has been identified to notify them of a ticket, according to Italian law.

Rental car agencies routinely identify tourists to authorities. Drivers can see when they were identified by credit card charges.

Military members and dependents driving their own vehicles are identified by the garrison.

Carabinieri and Vicenza police provide a monthly list with, on average, 60 license plate numbers that ran through the Italian system without a match, said Dennis Brown, operations officer for the garrison’s emergency services directorate.

Many months may have already elapsed by then since the cars were caught on camera, but the 360-day clock does not start until the garrison’s vehicle registration office runs the plates and provides Carabinieri the name and sometimes birthdate of a matching vehicle’s owner.

Military post office box numbers and unit addresses are not provided to the Italians, so the garrison runs down more contact information as a courtesy.

“We do everything we can to find the individual,” Brown said. “We go above and beyond what we’re really required to do by the SOFA.”

If someone has transferred back to the U.S., Brown says so in a letter to the Carabinieri and that’s the end of the matter as far as the garrison is concerned.

If the offender is still with the garrison, an email from the base provost marshal informs them that they’ve been cited for a traffic infraction.

Until a few weeks ago, the Carabinieri sent the emails, Brown said, but many people did not respond. “Now we do it. We’ve seen quite an uptick in response.”

The email requests that people come to the military police station on one of several suggested dates, where they’ll be assisted by the Carabinieri and provided an interpreter. When they show up, they’re taken next door to the Carabinieri and handed their ticket.

“They can pay on the spot” or wait and still get the 30% discount within five days, Tolbert said.

Non-payment after 60 days results in the fine being doubled.

Drivers can appeal or challenge the ticket and officials encourage people to seek counsel from military lawyers. Tickets from 2017, for example, could be invalidated if the driver received it more than 360 days after the garrison identified them to Italian authorities.

According to a 2016 story in Il Giornaleit, Italian cities collect only about 35% of traffic fines, including from Italians.

As much as garrison officials encourage Americans to pay their fines, the Army can’t force them to do so. Ramifications of dodging the debt appear to be limited but include the Italian use of a collection agency to seek payment and possible reports to a credit bureau.