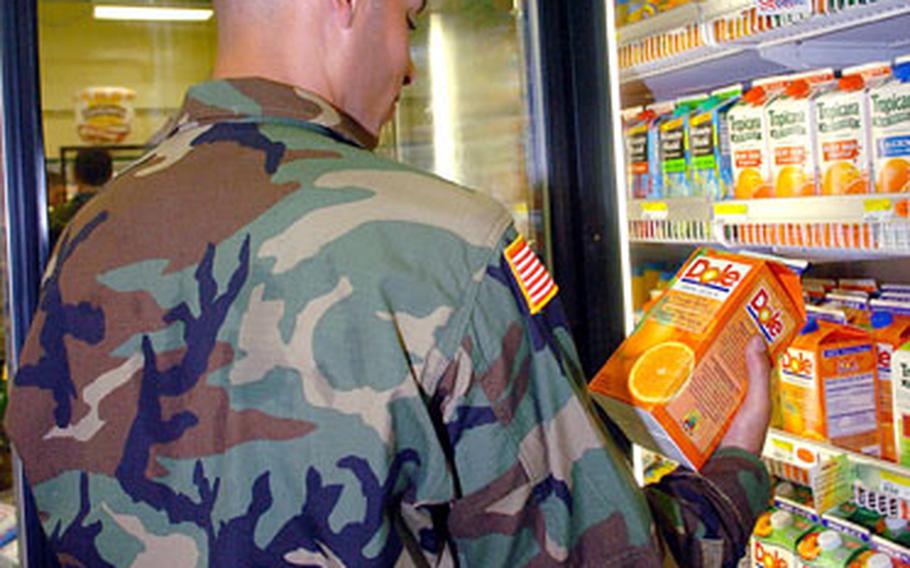 Army Pfc. Juan A. Rivas eyes the juice selection Wednesday at the newly opened commissary on Camp Eagle, South Korea. The commissary is housed in a renovated warehouse and will serve the Camp Eagle and Camp Long communities. (Susan Barkley / U.S. Army)

PYEONGTAEK, South Korea &#8212; Troops in the Wonju area who used to face a two-hour drive to shop at a commissary now have a much closer option at Camp Eagle.

The commissary, the first in the post&#8217;s history, opened Wednesday with a 10:45 a.m. ribbon-cutting ceremony. It will serve the U.S. military communities in the Wonju enclave, which includes Camp Long, about six miles from Eagle.

Store hours will be 11 a.m. to 7 p.m. Wednesdays, Thursdays and Fridays and 10 a.m. to 6 p.m. Saturdays and Sundays. It will be closed Mondays and Tuesdays.

The Defense Commissary Agency store will stock everything the biggest commissaries carry but will have fewer items in each category, said Steve Peterson, who oversees DeCA commissaries at Osan Air Base, Camp Humphreys, Kunsan Air Base and now Camp Eagle.

The store also will offer a special-order service that can ship in requested items with twice-weekly deliveries.

To shop at the closest commissaries, they&#8217;ve had to drive about 84 miles to Yongsan Garrison in Seoul or about 75 miles to Osan Air Base in Pyeongtaek. Driving from Camp Eagle to either installation usually runs about 2 hours and 15 minutes, Peterson said.

In past years a commissary at Camp Page was about 50 miles away, but that post closed in March 2005, he said.

Workers overhauled a warehouse to create the commissary, said Peterson. Within its overall 5,816 square feet is a sales area measuring 4,121 square feet.