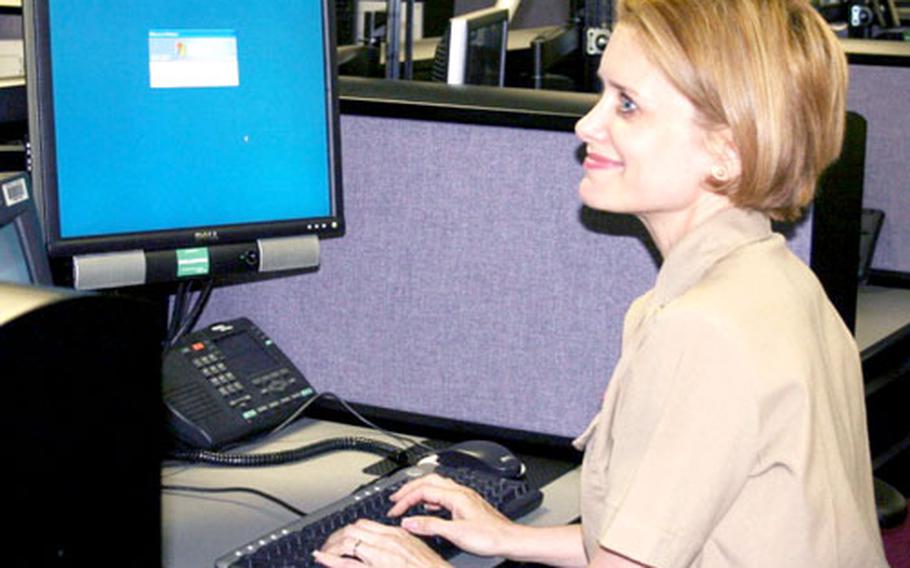 YOKOSUKA NAVAL BASE, Japan &#8212; An e-mail address that travels to all of your overseas assignments. A network harder on hackers. A centralized, government-owned, government-operated authority.

It&#8217;s all part of the ONE-NET makeover scheduled for 41,000 shore-duty U.S. Navy and Marine Corps personnel in Europe, Middle East and Far East.

ONE-NET stands for Outside the continental United States (OCONUS) Navy Enterprise Network. It is the overseas equivalent of Navy/Marine Corps Intranet, which consolidated stateside networks in 2000. Sea commands will stick with the IT-21 system, so eventually the Navy will be on three major networks, instead of many little legacy networks. ONE-NET is compatible with both, but unlike the other two is government owned and operated, according to Swallow.

The deadline for the first phase of the switch is September 2007, and so far, the migration is going well, Swallow said.

Bahrain&#8217;s 2,400 computers are completely cut over. Yokosuka has 1,500 to 2,000 computers switched. Work on Singapore&#8217;s 400 computers started last week. Okinawa starts in the beginning of April; work in Atsugi begins in May. More than 15,000 new Pentium computers are part of the transfer, which are being divided between Europe and the Far East.

The biggest challenge to date is getting people comfortable with the &#8220;universal help desk&#8221; concept, Swallow said. For example, all Far East trouble calls are funneled to the help desk at Yokosuka Naval Base. If service personnel can&#8217;t fix the problem by phone, the call is re-routed locally. It&#8217;s the opposite of what people are used to, Swallow said.

Keeping track of &#8220;trouble tickets&#8221; in one place will prove invaluable for trend analysis and fixing network problems, she said. It cuts down on staffing and redundancy.

Having a unified front is also harder on hackers and viruses because of fewer access points, Swallow said.

ONE-NET users in the Far East will also get a new e-mail address &#8212; first_name.last_name@fe.navy.mil &#8212; that will follow them to all overseas commands. Their work applications also will travel from computer to computer, Swallow said.

&#8220;I logged into ONE-NET last week in Singapore and all my files from Yokosuka were there,&#8221; Swallow said.

Certain applications that are licensed to individual computers, like Adobe Photoshop, won&#8217;t follow the user, said David Mackenzie, ONE-NET program manager in a Navy news release. Neither will video games, he said.

ONE-NET is planned to span from Naples to Guam and will become the Navy piece of the Global Information Grid &#8212; a Defense Department network planned to encompass 160 military installations worldwide.