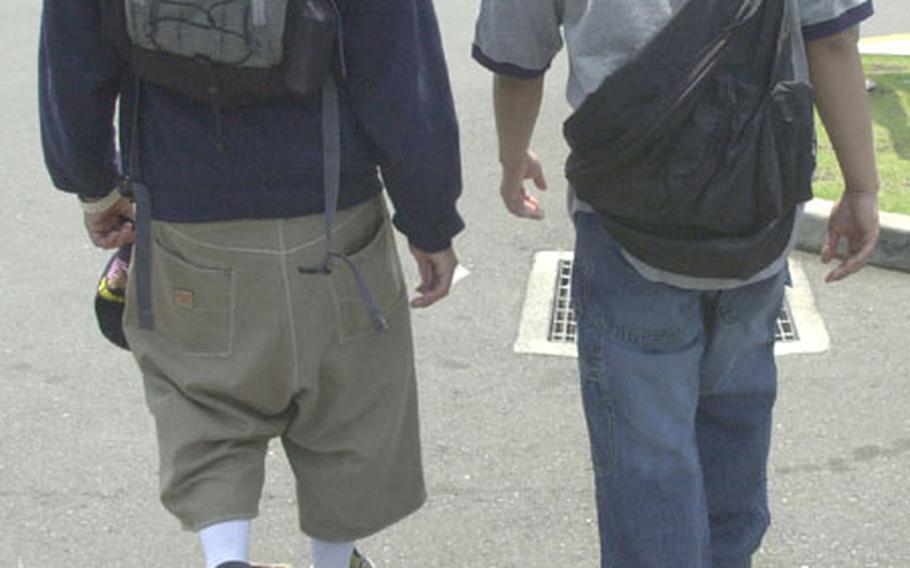 The Navy&#39;s civilian clothes policy, which is enforced for military personnel, will now be applicable to SOFA sponsored people as well. (Greg Tyler / S&S)

NAVAL AIR FACILITY ATSUGI, Japan &#8212; Civilian personnel and dependents on Navy bases in Japan will have to abide by a new dress code while on base.

That means no short shorts. Or really baggy shorts. Or torn jeans. Or bandannas. Or any hat, T-shirt, tattoo or piercing that a &#8220;reasonable person&#8221; would find offensive.

For two years, the Navy has required sailors to abide by a dress code prohibiting the aforementioned items, among other fashions. But this summer, the dress code has been expanded &#8212; and already applies &#8212; to dependents, civilians, military retirees, contractors, etc. &#8212; in short, any SOFA-status person on a U.S. Naval Forces Japan base.

While many servicemembers and civilians say the regulations are an understandable part of promoting good impressions of Americans overseas, others are fuming.

&#8220;I never want to hear another admiral or politician talking about how the military protects our freedom,&#8221; said Bill Albright, a civilian contractor at Atsugi. &#8220;Part of freedom is the freedom to act stupid or dress in jeans that have a hole [in the rear].

Students at Yokosuka echo that sentiment.

But not everyone thinks the policy will be a hardship.

Until now, the policy was binding only for military personnel. But Navy officials say the addition of civilians is an issue of fairness and responsibility.

&#8220;A family member and civilian employee have the same responsiblity that the sailors do to our Japanese neighbors,&#8221; Atsugi Command Master Chief Joseph Halton said. &#8220;That is the bottom line of this instruction.&#8221;

While a 7th Fleet spokesman could not say when the policy was amended, he did say it &#8220;was something under consideration for a while.&#8221;

&#8220;My opinion is if you require it of one group, why not require it of everyone else?&#8221; 7th Fleet spokesman Jon Nylander said.

Officials at 7th Fleet referred questions about the regulations to the 7th Fleet Command master chief, who is traveling and unavailable.

When enacting the original policy in August 2001, the 7th Fleet chief of staff said the regulations were meant to help the Navy project a positive image.

&#8220;Persons whose appearance does not comply with this regulation/policy, and who cannot correct the discrepancy on the spot, will be directed to return to their command, quarters or residence to improve their personal clothing/appearance.&#8221;

A full list of the guidelines is spelled out in CNFJ Instruction 1020.3a.

Among other popular fashions, tank-tops (for men), white T-shirts worn as outergarments and midriff-baring shirts are banned.

So far, enforcement has mostly occurred at base exchanges or commissaries, officials said. Those in violation were not allowed to enter.

Similarly, guards at the quarterdecks of in-port ships are allowed to inspect the clothing of any sailor and can order him or her back aboard to change.

One security worker at Yokosuka said he would not actively be looking at the clothing people wore when walking around base. He has been given no orders, he said, to increase vigilance about enforcing the policy.

But that won&#8217;t stop complaints by affected civilians.