New dorm set to open at Kunsan Air Base 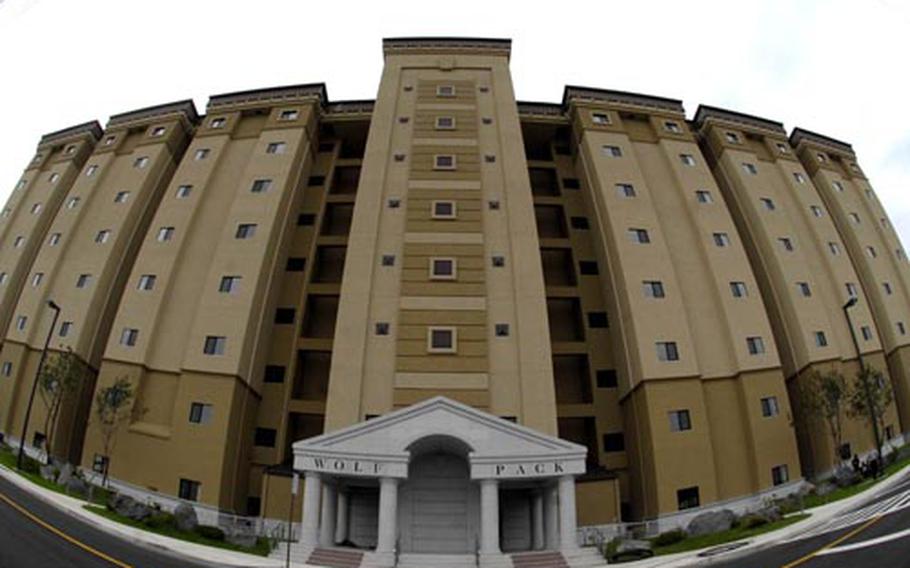 Kunsan airmen are scheduled to move into this new 384-person dorm on July 26th. The dorm is the second of four new dorms planned to replace Kunsan&#39;s aging dorms, which have had ongoing problems with plumbing and air conditioning. (Courtesy Photo / U.S. Air Force)

Airmen will begin moving into a new dorm at Kunsan Air Base this weekend, the second of four scheduled to open in the next few years as the base replaces old dorms plagued with plumbing and air conditioning problems.

The new dorm will house 384 airmen in four-person suites, each with a common kitchen and living area. Each airman will have his or her own 129-square-foot bedroom, bathroom and walk-in closet.

By opening the new dorm, the base will be able to shuffle other airmen out of the worst dorms and make repairs to some. One of the vacated dorms will be demolished Aug. 15 to make way for another.

"We have dorms that are in better shape than others. We&#8217;re going to work with that and see if we can bump people up to better living conditions," said Lt. Andrew Boykin, chief of capital asset management. "Right now, we&#8217;re a little tight-squeezed for space. This new dorm is going to bleed out a lot of room for us to play with so we can get people taken care of."

The dorm is one of two eight-story buildings on the base. The other is a neighboring 288-person dorm with identical suites, which opened in September.

The newest dorm will house airmen from Kunsan&#8217;s civil engineering, security forces and support squadrons, as well as fighter wing personnel, Boykin said. Soldiers stationed at Kunsan will move into one floor of the building in September.

Because the military considered closing Kunsan at one point, little money was spent on maintaining its dorms, most of which were built in the 1980s.

Security forces personnel were forced to move out of their dorm earlier this year because living conditions were so bad. Pacific Air Force Command Chief Master Sgt. Anthony Bishop ordered the dorm to be closed after visiting it.

That dorm and two adjoining dorms that were also condemned will be demolished at the end of August.

A new theater opened at Kunsan in February, and construction is under way on a new hotel that is scheduled to open in 2009.