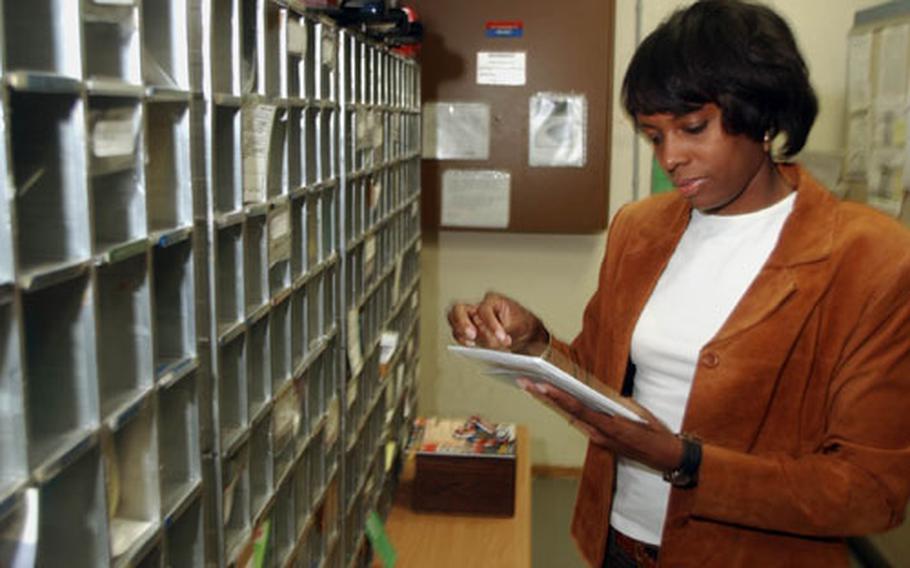 Department of Defense civilians such as Sheryl Cooks, a postal clerk at Rhein-Main Air Base in Germany, could be subjected to serveral changes in the way DOD manages its civilian work force under the National Security Personnel System now being studied. (Raymond T. Conway / S&S)

Already delayed once, officials had planned to launch a pilot program for the National Security Personnel System, or NSPS, by July 2005.

&#8220;I wouldn&#8217;t doubt that slips because that&#8217;s still a very aggressive schedule. So it will probably be sometime after summer,&#8221; Jeannie Davis, the Army&#8217;s assistant deputy chief of staff for civilian personnel in Europe, told a gathering of top civilian managers in Heidelberg, Germany, last week.

Now, DOD-wide implementation for the program is expected no sooner than July 2007.

The expected delay comes after Pentagon leaders were told to scrap plans to have a new system to manage the military&#8217;s some 670,000 civilians in place by next month.

The Pentagon had planned to launch it on Oct. 1, with the beginning of the new fiscal year. Military leaders have become increasingly frustrated with the current system, which is seen by many as too bureaucratic with cumbersome hiring and firing policies.

Davis pointed to one example where several hundred DOD police were needed in Washington, D.C., after the Sept. 11, 2001, attacks.

Officials were hoping to quickly change all that with NSPS.

Federal labor groups and others had balked at such a quick overhaul and felt largely out of the loop in developing the replacement.

&#8220;There was a lot of concern about how quickly they were moving, how quickly they were developing this new system and not involving a whole lot of other people,&#8221; Davis said. &#8220;Earlier this year, things came to a head. Congress expressed some concern &#8212; as did the unions &#8212; saying things were going too fast.&#8221;

Now, the Defense Department is adopting a take-it-slow approach, trying to reach out to military civilians in an effort to build consensus on what the new system should look like.

Davis said one senior leader was recently briefing a gathering of about 400 DOD civilians. All but about 100 walked out in protest, she said.

Undeterred, officials are holding town hall meetings at military installations around the world.

Legislation authorizing the new system expires at the end of 2008.