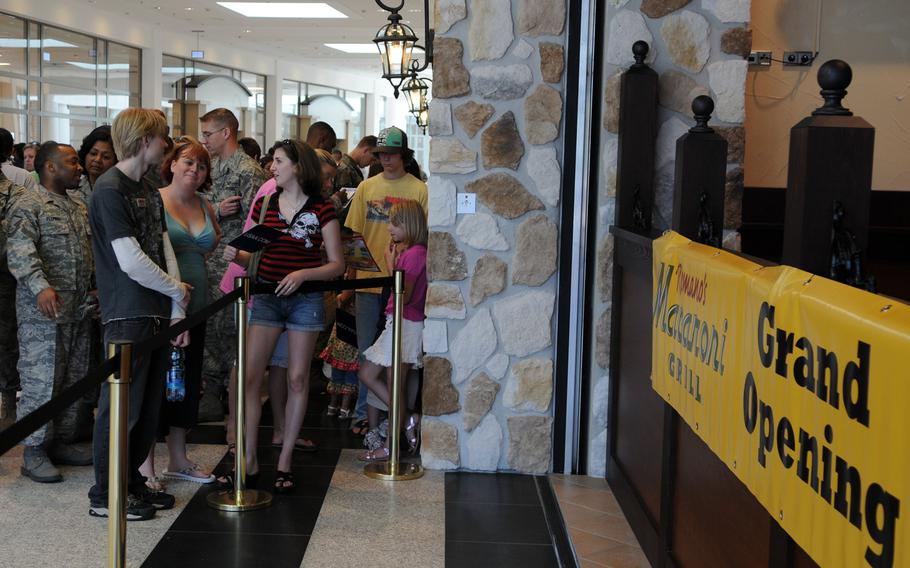 Water damage have forced the relocation of the Macaroni Grill, which opened July 6, 2009 at the Kaiserslautern Military Community Center. The restaurant will be moved to the Ramstein Officers' Club under the flooring can be replaced. (U.S. Air Force photo)

Water damage have forced the relocation of the Macaroni Grill, which opened July 6, 2009 at the Kaiserslautern Military Community Center. The restaurant will be moved to the Ramstein Officers' Club under the flooring can be replaced. (U.S. Air Force photo) 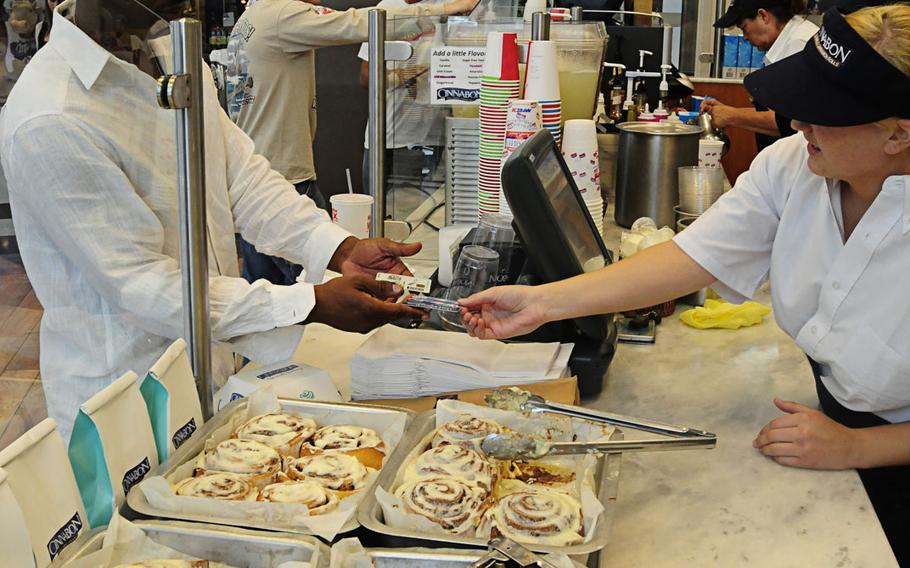 A Cinnabon employee serves a customer at Ramstein Air Base, Germany, May 20, 2011. The Kaiserslautern Military Community Center, which recently closed, is being replaced by a Dunkin? Donuts, set to open by early June. (Desiree Esposito/U.S. Air Force)

KAISERSLAUTERN, Germany — Americans hankering for some sweet, gooey buns of baked dough to increase their belt size will no longer be able to satisfy those cravings at the Kaiserslautern Military Community Center.

The KMCC’s Cinnabon — the last one remaining on a U.S. military base in Europe — recently closed.

But more tempting treats are on the way: A Dunkin’ Donuts is set to open in the former Cinnabon space by early June, said Marc Floyd, general manager for the KMC consolidated exchange.

“It will provide all the normal services seen in a U.S. Dunkin’ Donuts store,” said Lt. Col. Al Hing, spokesman for the Army and Air Force Exchange Service in Europe.

The arrival of the first Dunkin’ Donuts at a U.S. military base in Europe is among several changes planned for the KMCC on Ramstein Air Base, one of the largest military shopping malls in the world. Several new restaurant chains and shops are set to open in coming months, and a few familiar storefronts will disappear.

To counter the gluttony of fried dough and greasy potatoes, Via Vai’s — a healthy alternative to the food court’s fast-food options — will open March 1, Floyd said.

The Italian eatery’s motto is “fresh and fast.” It will offer smoothies, a juice bar, tea, coffee drinks, frozen yogurt, and a variety of soups, salads and sandwiches. A local contractor who runs several Italian restaurants in the Kaiserslautern area is heading up the venture, which will move into the space vacated by the optical shop, across from Nanu-Nana, Floyd said.

“We always hear about requests for healthy food options,” Floyd said. “This is one that really hit that target. We’re anxious to see how it does.”

Also set to open inside the food court, tentatively in December, is Boston Market, the first on an overseas military base, Floyd said. It will replace an existing vendor, but he wouldn’t say which one.

Plans to bring Chick-fil-A to the KMCC haven’t yet panned out, he said, noting the franchise declined to expand to Europe last year.

In line with more healthy options, a GNC shop will open in the mall this summer, Floyd said. That location hasn’t been announced, either, he said.

Further down the road, a new dual Burger King and Arby’s with a drive-thru is planned for the far corner of the KMCC parking lot, across from the current Burger King and by the static aircraft display. The old Burger King will be demolished and converted to parking.

Romano’s Macaroni Grill, meanwhile, shuttered last week for what could be the rest of the year. A major renovation project is underway to tear up and replace the flooring throughout the restaurant, base officials said.

Water damage, caused by water seeping through tile grout during routine mopping, was discovered about two years ago in the subflooring in the restaurant’s kitchen area, said Dan Schofield, 86th Force Support Squadron business operations flight chief.The renovation project will replace the kitchen subflooring and dining area flooring and costs more than $500,000. It’s being paid for by wing funds and installation Morale, Welfare and Recreation dollars.

The project is scheduled to be completed sometime in December. In the interim, a Macaroni Grill with a modified menu, will move into the dining room at the Officer’s Club in early May, where renovations to replace the carpet with a tile floor and add Macaroni Grill amenities are underway.

Most of Macaroni Grill’s 100 employees have been placed in other positions throughout the squadron; they’ll work from the Officer’s Club when the restaurant opens there, Schofield said. Some special events at the Officer’s Club will still be held, such as Easter and Mother’s Day brunches, but regular dining will be Macaroni Grill style, with the same hours, phone number and takeout services.