New digs in the works for civil engineers at Misawa 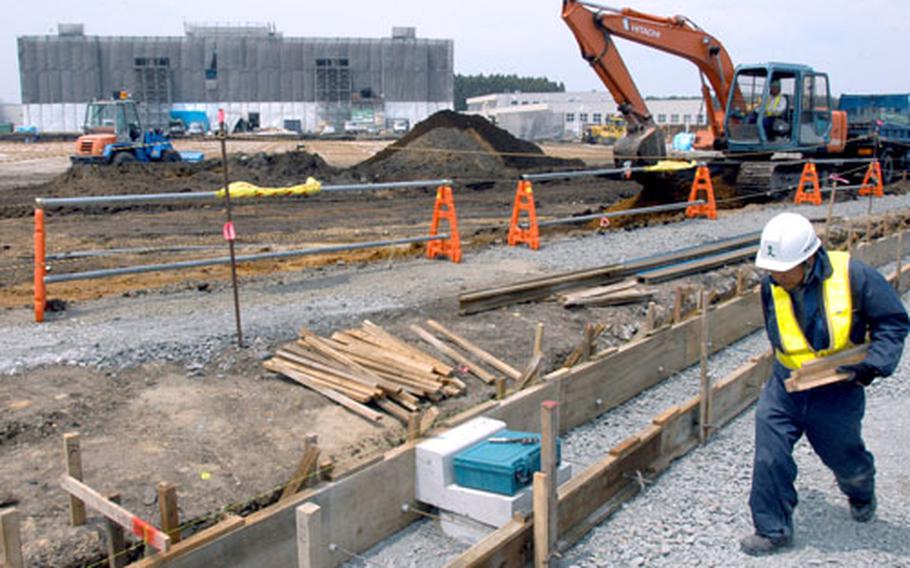 In other words, when the ground thaws, the hammering starts. This year is no different.

Among the major construction projects around base this summer is a new 35th Civil Engineer (CE) Squadron complex, being built across the street from the Army and Air Force Exchange Service gas station. Funded by the Japanese government, the compound, according to CE officials, will consolidate the squadron into several buildings: A three-story administration facility; a large-equipment-and-vehicle garage with 20-foot doors; a warehouse; an operations shop for CE utility troops; and, in a separate building near the Air Mobility Command (AMC) passenger terminal, entomology.

The project is slated for completion by this winter.

Citing host-nation sensitivities, base officials declined to disclose the CE complex cost. But Bartels said civil engineering is managing 55 projects &#8212; in various stages of completion &#8212; worth about $690 million in the host-nation construction program.

Bartels works with 5th Air Force and U.S. Forces Japan to submit projects for Japanese-government funding. Japan won&#8217;t fund construction for moneymaking ventures, such as a movie theater, Bartels said. Most construction starts in the host-nation program but can revert to an Air Force project if funding becomes available.

Japan won&#8217;t fund &#8220;new&#8221; construction, either, meaning that when a government of Japan project is approved, another base building typically is designated for demolition, Bartels said.

Civil engineers will vacate their aging pre-World War II-era headquarters by the flight line and hand it over to the Japan Air Self-Defense Force at Misawa, officials said. The structures eventually will be torn down to make way for future development. Base operations in time is to get a new building in the area, where they&#8217;ll be located with JASDF base operations, Bartels said.

The Japanese government also is funding ongoing expansion of the south taxiway and aircraft-parking apron. Started in 2003, the work will extend the taxiway the length of the 10,000-foot runway, allowing aircraft to enter and exit the airfield more efficiently at that end.

The U.S. Air Force is funding its share of construction projects, too. Trees are being removed near the south end of the airfield because of their potential to interfere with aircraft sensors and hinder landings, officials said.

The first phase involved the clearing of about 19 acres and is nearly complete. The next will entail the wooded hill and grounds west and south of Hangar 949, so the ramp for transient aircraft can be extended and a refueling station built. Gessner said the downed trees will be recycled and additional trees planted throughout the base.

Another major project, expected to start soon, will revamp about 283 older homes on base. Funding for the $50 million effort comes from the Air Force&#8217;s Post Acquisition Improvement Program.

The improvements include new kitchen cabinets, room realignments, bathroom upgrades, new carpeting and tiles, floor treatments and electrical wiring and lighting enhancements. The first phase targets homes on Yellowstone Drive on Main Base and several cul-de-sac streets along Eagle Drive in the North Area. The housing office is working to coordinate construction when units are vacant, Gessner said.