New device that monitors blood flow could end up on battlefield A prototype of the Compensatory Reserve Index device, which monitors the time left before a bleeding patient goes into hemorrhagic shock. Its makers are seeking FDA approval. (U.S. Army)

A prototype of the Compensatory Reserve Index device, which monitors the time left before a bleeding patient goes into hemorrhagic shock. Its makers are seeking FDA approval. (U.S. Army) The Compensatory Reserve Index device measures a patient's artery waveform and estimates how long the body will be able to compensate for blood loss, as shown on this prototype readout screen. (U.S. Army) 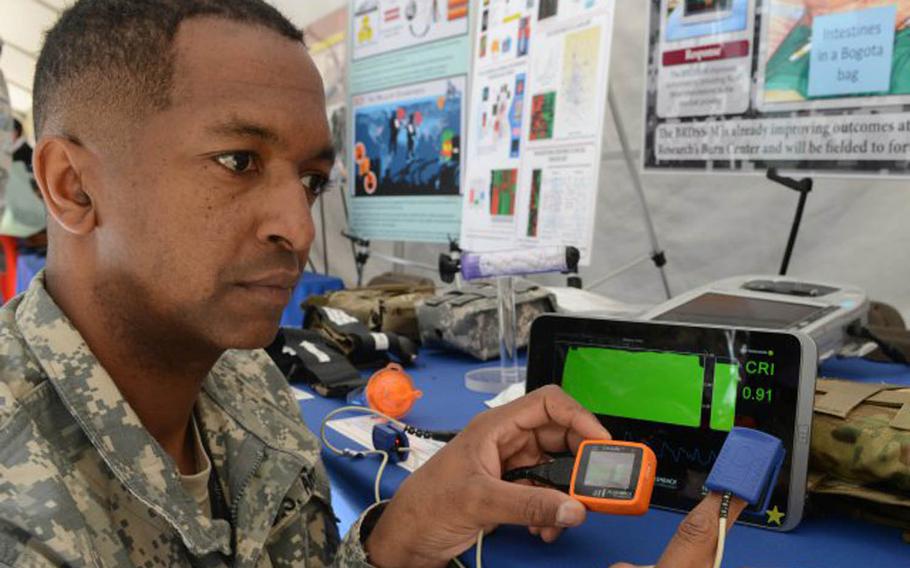 Lt. Col. Robert Carter, with the Tactical Combat Casualty Care Research program, shows the Compensatory Reserve Index, or CRI, device that could lower casualties on the battlefield by warning when shock is imminent due to blood loss. Behind the CRI is a green-screen smart tablet that can display results from multiple CRIs. (U.S. Army) 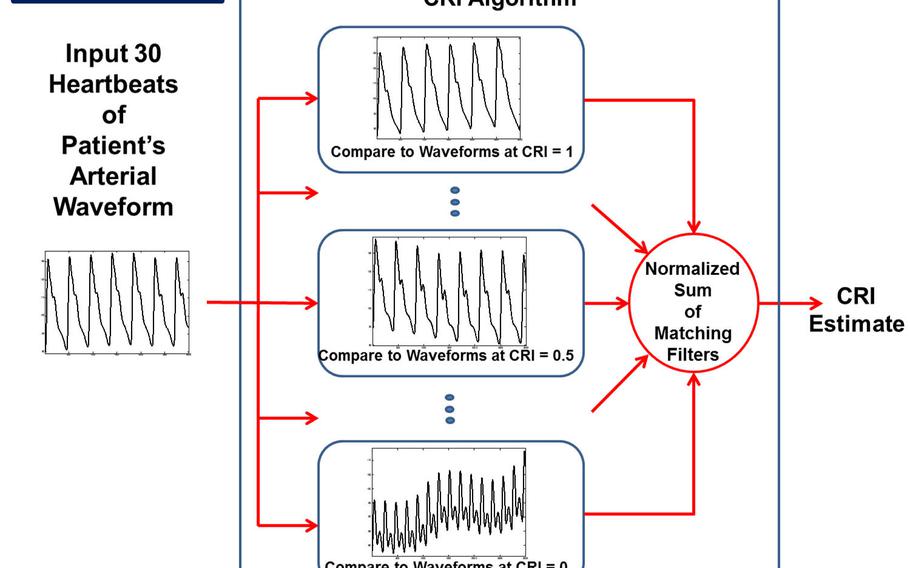 The CRI device measures the body's "blood reserve" by using an algorithm that continuously assesses waveforms made by the heart's contraction and a subsequent jolt of pressure. The device begins providing readouts after 30 waveforms and continues updating with each additional waveform. (U.S. Army)

A wounded warfighter can bleed slow or fast, sometimes undetectably.

The good news is that the human body does an astounding job of compensating for blood seepage by maintaining blood pressure.

The bad news is that this survival mechanism can mask how close someone is to hemorrhagic shock, which could be a battlefield medic’s first indication of just how grave the bleeding has been.

“So you have medics watching blood pressure, and it’s not changing even though an individual could be losing a significant amount of blood,” said Dr. Vic Convertino, a Combat Casualty Care Program Senior Scientist at the U.S. Army Institute of Surgical Research at Joint Base San Antonio-Fort Sam Houston, Texas.

Convertino and his fellow researchers are nearing approval by the Food and Drug Administration for a small device that allows trauma medics to accurately monitor the rate at which a bleeding patient will reach the point of “decompensation,” when the body can no longer offset blood loss, shock sets in and death soon follows.

Just as the fuel gauge in a car measures how much gasoline remains to keep it running, the Compensatory Reserve Index device, which is clamped to the end of a finger and measures heartbeat, is able to judge how long before a patient reaches decompensation.

“Decompensation is a really strange thing,” said Master Sgt. Roger Sparks, a pararescueman with the 212th Rescue Squadron of the Alaska Air National Guard 176th Wing, who has treated numerous wounded during deployments to Afghanistan.

“I’ve seen people who have relatively minor wounds that die versus someone who has horrific, mutilating trauma that they live through. Everybody’s different. It’s a very subjective thing for us as medics in a combat setting to differentiate who’s compensating well and who’s not.”

For almost two decades, Convertino has been seeking a way to monitor the gravity of bleeding, the top cause of death on the battlefield.

For quite some time, battlefield medics have used a finger-clip device called a pulse oximeter that measures pulse rate and the amount of oxygen in the blood. The problem with that and other technology is that the readings remain relatively constant until the moment of decompensation “when all of a sudden the system collapses and [patients] go into shock and you don’t have enough time to intervene and help the patient,” Convertino said.

Convertino said the researchers “stumbled upon almost happenchance” certain features of an artery pressure waveform that’s produced when the heart contracts and sends a shot of blood into the arteries. Those features change as an individual loses blood.

“It turns out that those features represent the sum total of all the compensatory mechanisms, so it’s the perfect thing to measure,” Convertino said.

The researchers spent more than a decade experimenting with simulating bleeding on human volunteers in order to build a database that would allow them to design an algorithm for software to predict the point of decompensation.

The medical community has long known that some individuals compensate for blood loss at different rates. For example, some people who donate a pint of blood feel faint afterward; others aren’t bothered at all.

“We’ve studied the physiology of that,” Convertino said. “We call the first group good compensators — they have good cardiovascular systems that compensate for that blood loss.”

It’s the “low compensators” who are at greatest risk of going into shock early from blood loss, he said.

“They’re the ones we want to get on the helicopter first,” he said.

To simulate blood loss, volunteer subjects — all healthy men — sat in a waist-high chamber that sealed off their lower bodies. Vacuum pressure in the chamber would slowly draw blood from the torso and head into the legs.

“The physiology looks just like hemorrhage,” Convertino said. “The beauty of that technology is we can do different protocols of different rates of bleeding and we can take the individual all the way to the point where their system fails and collapses, so now we have an end point that we can develop our algorithm for prediction -- because that’s the first stage of shock.”

The researchers then teamed up with robotics engineers at the University of Colorado to come up with a way of measuring the changing features of the waveforms.

“So now in real time we can determine those features and therefore determine the changes in the reserve to compensate for blood loss,” Convertino said. “When reserve gets to zero, that’s when people go into shock and we can actually determine how much of that reserve is left way early so that we give medics an early indicator.”

The prototype of the device sends readings to a smart tablet via cable, but the working model is expected to use wireless technology, enabling a medic to look at one tablet for readings from devices attached to multiple wounded. The hope is to incorporate the technology into the pulse oximeter that’s now used on the battlefield, Convertino said, at a cost of about $200 per unit.

Sparks, who has not been involved in the research, says he sees such a monitor as a “step forward” for medics — with a few caveats.

“If we put a monitor of somebody, you instantly start staring at the monitor,” he said. “Sometimes it’s more important to watch the patient, and when you turn on all those different devices, you really get stuck into this Bermuda Triangle of attempting to understand what it’s saying versus just assessing the patient.”

On the other hand, a medic at times gets “tunnel vision” with one particular patient, and this device could provide a needed heads up, he said.

The researchers are collaborating with the obstetrics department at nearby Brooke Army Medical Center to monitor for a rare but dangerous condition called postpartum hemorrhage. It’s also being used in a Bangkok children’s hospital to monitor patients with dengue hemorrhagic fever, which breaks down capillaries in the body and leads to blood leakage.

The Israeli Defense Force is using the device on casualties and collecting data, Convertino said, and he expects some preliminary findings in August.

The device does not require FDA approval in Israel; FDA clearance in the U.S. could come before the end of this year, Convertino said.