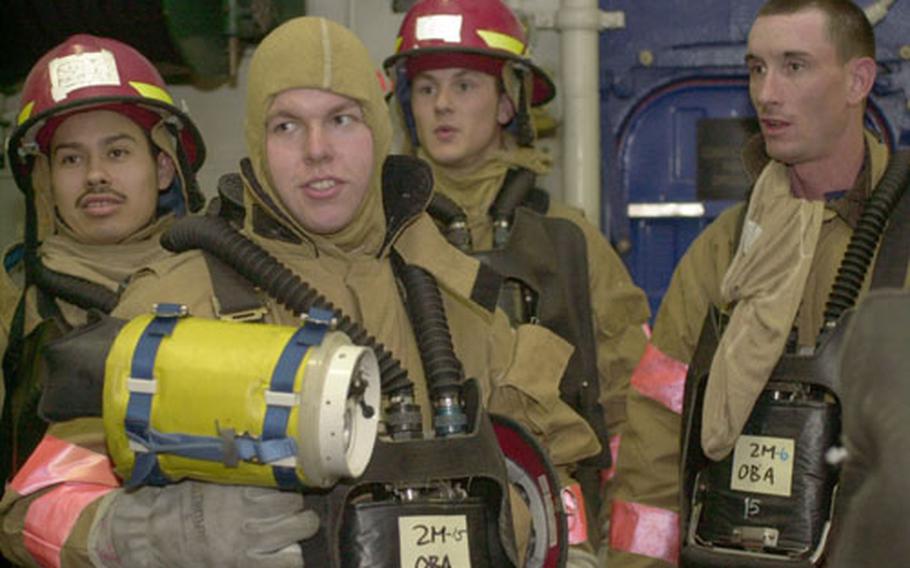 A group of Navy firefighters get ready for training aboard the USS Bataan on Thursday during "general quarters." The amphibious assault ship is on its way to the Persian Gulf to drop off Marines. The Navy wants its fleet and sailors to be ready to go on a moment&#39;s notice for "surge deployments." (Scott Schonauer / S&S)

A group of Navy firefighters get ready for training aboard the USS Bataan on Thursday during "general quarters." The amphibious assault ship is on its way to the Persian Gulf to drop off Marines. The Navy wants its fleet and sailors to be ready to go on a moment&#39;s notice for "surge deployments." (Scott Schonauer / S&S) 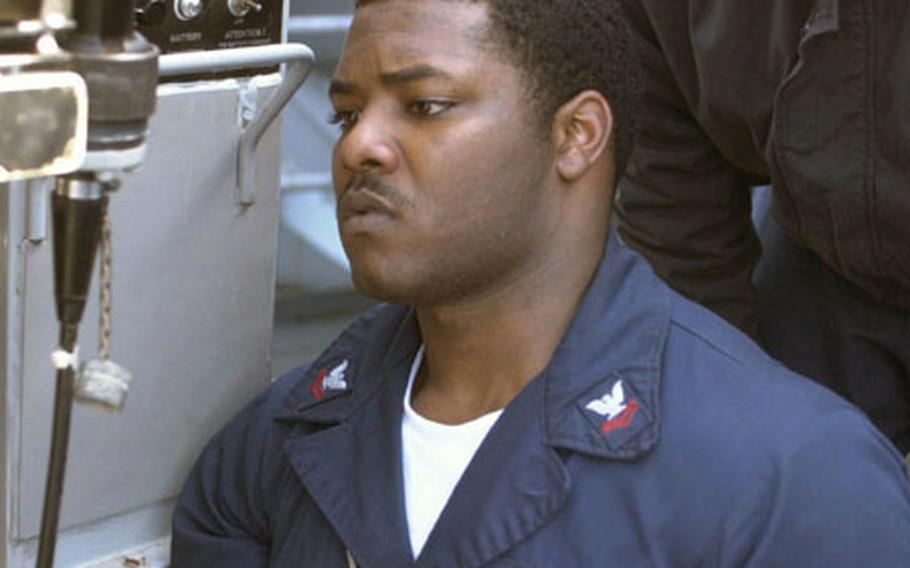 Navy Petty Officer 1st Class Kevin Coley looks over the shoulder of Seaman Percy Upshaw as he works on a .25-caliber gun aboard the USS Bataan on Thursday. (Scott Schonauer / S&S)

ABOARD THE USS BATAAN &#8212; The sailors had only been home six months from a deployment to the Persian Gulf when the Navy ordered the Bataan to go back &#8212; again.

Some sailors grumbled, but the trip would be only three months, short by Navy standards.

The Bataan is steaming through the Arabian Gulf on a mission to drop off Iraq-bound Marines, and should be home by April.

The mission is unusual for an amphibious ship less than a year removed from its last deployment, but more of the Navy&#8217;s nearly 300 ships could see similar quick trips under a new deployment strategy that took effect in December.

It means sailors might not necessarily stay at sea for the usual six months unless there is a good reason.

The catch is that their stay could be longer or it could be shorter depending on what the Pentagon wants, and they must be ready to leave on short-notice.

Adm. Vern Clark, the Navy&#8217;s top officer, told reporters in November that the old, six-month &#8220;heel-to-toe&#8221; deployment has become too predictable and rigid. Ships should leave with a clear purpose and be able to do so in 30 days, he said.

The Norfolk, Va.-based ship plans to turnaround and head home once it finishes the job of dropping off helicopter squadrons from the Camp Lejeune, N.C.-based II Marine Expeditionary Force. Another amphibious assault ship, the USS Boxer, also left in January to take Marines and their equipment to Iraq.

In the past, ships would have a period of up to two years between sea tours. Sailors would use that time to overhaul the ship and train to get ready for the next deployment.

The new plan calls for a ship returning from deployment to go straight to the yard for major maintenance and improvements. When it gets out, sailors must go through a rigorous training phase.

Capt. Earle Yerger, the Bataan&#8217;s commanding officer, said the new plan makes it harder for sailors to plan their immediate future, but it is necessary in today&#8217;s Navy.

Cmdr. Jon Dachos, the Bataan&#8217;s operations officer, said the lingering question is how the changes are going to affect families.

Cmdr. Kieran Mandato, a Catholic priest who serves as the Bataan&#8217;s chaplain, is worried the high pace of deployment will drive younger sailors out of the military.

Petty Officer 2nd Class Blake Hoyt, 22, said the frequent deployments &#8212; whether they are short or long &#8212; are hard, but families are adjusting. Other sailors said they have become &#8220;numb&#8221; to the greater amount of time they are away from home.

Most sailors will not have a choice.