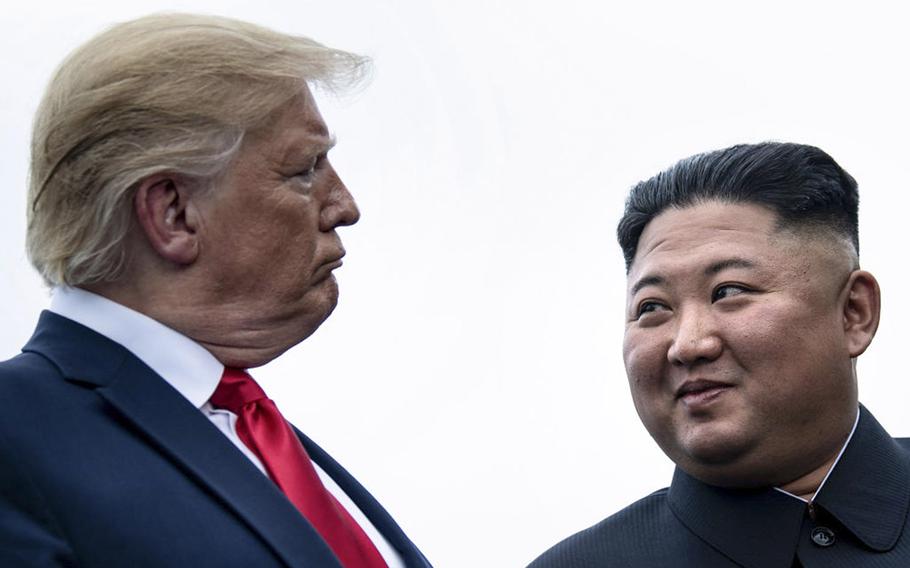 SEOUL, South Korea — The previous decade ended with real fears that North Korea might test-fire an intercontinental ballistic missile, dashing hopes for peace and provoking a new cycle of “fire and fury.”

Instead, North Korean leader Kim Jong Un kept the world in suspense by ringing in the New Year with a threat to unveil a new strategic weapon “in the near future” and to abandon his self-imposed moratorium on long-range missile and nuclear tests.

It was an ominous start to 2020, with nuclear talks moribund and tensions high amid uncertainty over the North’s next move.

“I think Kim is closing the door on negotiations but has not yet slammed it shut,” said Bruce Klingner, a former CIA Korea deputy chief now with the Heritage Foundation, a conservative think tank in Washington. “I think it’s very likely he’ll do some kind of provocation.

“We’re not sure if he’ll jump immediately to an ICBM or a nuke test, or whether he’ll move up the escalation ladder more incrementally,” Klingner said Jan. 6 in a telephone interview. “But he still has an eye on trying to influence the U.S. to give in on what North Korea has been demanding for years.”

Those demands range from lifting punishing economic sanctions aimed at curbing its nuclear weapons program to ending joint U.S.-South Korean military exercises and sales of fighter jets and other sophisticated equipment to the South.

“I think Kim’s long-term game is the same as his father’s and grandfather’s — to have North Korea develop and field nuclear weapons to deter a U.S. attack ... and to be accepted by the world as a nuclear state,” Klingner said.

Complicating matters, President Donald Trump faces a reelection battle and impeachment proceedings this year as well as new turmoil in the Middle East after the U.S. airstrike that killed Iran’s top general in Iraq.

The longtime alliance between the United States and South Korea has been shaken by disagreement over the approach to the North and Trump’s demands that Seoul sharply increase its share of the cost for housing 28,500 American troops on the peninsula.

North Korea, meanwhile, has continued to make progress in developing nuclear weapons that could threaten the U.S. mainland despite punishing international economic sanctions.

It conducted 15 weapons tests last year, demonstrating advances in developing solid-fuel short-range missiles that could target South Korea, Japan and tens of thousands of American troops in the region.

Trump, who declared that he and Kim “fell in love” in 2018, has adopted an increasingly harsh tone in recent weeks as his administration came under mounting pressure to change its strategy.

Insisting that his bromance with Kim is still on, Trump revived his “rocket man” nickname for the North Korean leader and threatened to use military force if needed to achieve denuclearization.

The president also conceded doubt about Kim’s plans in more recent remarks. “I don’t think he’d break his word to me, but maybe he will,” the president told reporters Jan. 5 aboard Air Force One.

Critics pointed out that Kim has not made any promises other than a vague agreement to “work toward the complete denuclearization of the Korean Peninsula,” during his first summit with Trump in June 2018 in Singapore.

“Well that’s something we will take a look at, certainly, depending on Kim Jong Un’s next move,” Esper said when asked about the prospect during a recent interview with MSNBC. “We continue to urge the North Koreans to get back to the diplomatic table.”

The next test for the administration’s stance on joint drills will be in the spring, when the allies have held major operations known as Key Resolve/Foal Eagle.

“What’s clear at this point is that the maximum ambiguity stance by the United States has not resulted in the outcome we have sought,” said Jessica Lee of the Quincy Institute for Responsible Statecraft, a U.S. think tank launched last year to promote diplomatic engagement and military restraint.

“Instead what we need is more clarity and positive inducements that will bring North Korea back to the negotiating table,” she said. Lee said those could include partial sanctions relief, an end-of-war declaration and the opening of liaison offices in exchange for the dismantlement of facilities at North Korea’s main nuclear facility.

Others called for increased sanctions on North Korea and countries such as China that are accused of enabling sanctions evasion.

The United States had braced for the worst after North Korea hinted that Washington would receive an unwanted "Christmas gift" if it failed to offer concessions by an end-of-year deadline set by Kim.

The special envoy to the North Stephen Biegun, newly minted as deputy secretary of state, traveled to Seoul last month with hopes of meeting his North Korean counterparts but left empty-handed.

The fact that the North didn’t launch an ICBM offered little relief as Kim’s speech, which was reported on New Year’s Day in lieu of his traditional televised address, suggested he was likely preparing for a return to confrontation over diplomacy.

"The false calm is over; the old North Korean nuclear crisis is back on — only it has just entered a deadly serious phase," political economist Nicholas Eberstadt wrote in an opinion piece published Jan. 1 in The New York Times.

"The government in Pyongyang is looking to establish a new normal: one where it gets to threaten San Francisco with incineration and we get to do nothing," he said. "The United States’ only option for precluding this nightmare is to bring down the hammer on the Kim regime before its capabilities expand even further."

The downward turn occurred nearly as fast as the whirlwind peace process that began in early 2018 when the North participated in the Winter Olympics and a series of summits and goodwill initiatives.

The decision to engage reversed months of rising tensions as North Korea test-fired increasingly sophisticated missiles while Trump and Kim traded personal insults and threats that pushed the peninsula to the brink of another war.

Trump announced he was "stopping the war games," leading the U.S. and South Korean militaries to cancel or sharply curtail annual military exercises.

The drills have long been a linchpin in the alliance between the two countries that fought together against the communist-backed North in the 1950-53 Korean War, which ended in an armistice.

However, 2019 was marked by diplomatic deadlock as negotiators were unable to overcome key differences that have long plagued efforts to rein in North Korea’s nuclear ambitions.

The North, which has been ruled by the Kim family since it was founded in 1948, sees its nuclear arsenal as a deterrent against regime change.

It sought an incremental approach to talks with the United States that would include sanctions relief, security guarantees and other rewards for steps taken. Trump has insisted he will maintain economic pressure on the North until denuclearization is achieved.

Negotiations collapsed when Trump and Kim failed to reach agreement during their second summit in February in Vietnam.

Vying with the United States for influence, China and Russia signaled decreasing support for the sanctions, which could make it more difficult to enforce efforts to prevent North Korea from earning foreign currency for its weapons programs.

China’s support for sanctions was considered key to the North’s decision to come to the table in early 2018, but Beijing loosened the noose as it sparred with Trump in a trade war last year.

Chun Yungwoo, a former South Korean national security adviser who led nuclear negotiations with North Korea known as the six-party talks from 2006-2008, said the North never planned to give up its nuclear weapons program.

"I think they may be at the end of the day willing to make some reduction in their nuclear capabilities," he recently told Stars and Stripes. "What they want is arms control instead of full denuclearization in return for the abandonment of what they call U.S. hostile policy."

He also stressed the importance of verification since the previous nuclear agreement collapsed in part over its obstruction of inspections.

"They are so good at cheating," he said. "That’s usually the problem."

The killing of Iranian Gen. Qassem Soleimani in a U.S. airstrike earlier this month after he arrived in Baghdad and the resulting chaos has the potential to be a game-changer for North Korea as well.

"They may feel that Kim could be personally threatened or attacked," he said. "But the biggest impact is that it will affirm in their mind a need for nuclear weapons."