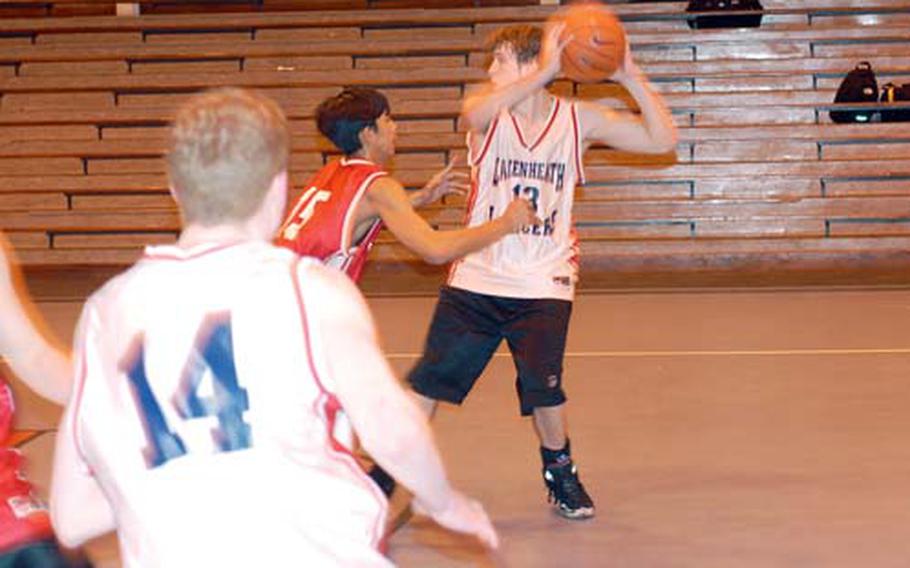 Lakenheath Lancer basketball player Brian Putt looks to drive the ball against Tyson Campbell during practice. The Lancers are coming off a 9-5 season and they are hoping to excel at the European championships this year. (Mark Abramson / S&S)

Lakenheath High School&#8217;s hoops coaches are looking forward to what they hope is a stellar season, while Menwith High looks to win it all. Alconbury looks to compete, despite being in what their coach called a rebuilding year.

The Lakenheath Lancers boys basketball team is coming off a 9-5 season in which they didn&#8217;t win a game in the Division I European championships. But coach Alan Campbell said he is more optimistic about his team&#8217;s chances this year.

"We have several kids who moved up from the JV (team) and a nucleus of about four or five kids who return to varsity," Campbell said. "We are going to have to play team ball in order to be successful."

Campbell said he is looking forward to playing more Division I teams and seeing the likes of Heidelberg and Ramstein to be better prepared to play them in the championship tournament. He also boasts about the job new assistant coach Brion Davis has done since he arrived this year from a school in California.

Menwith Hill came up a little short last season by losing to Rota in the semifinals of the Division IV European championships.

"We got a strong group of players this year," Menwith Hill athletic director Pete Resnick said. "I think we have good ball handlers and team quickness. We got one big guy inside in Corey Crane at 6 feet 5 inches."

Depth could be an issue though, Resnick said.

The players to watch are guards Scottie Setzer and a new point guard, Christopher Jackson, who is a freshman and an excellent ball handler, Resnick said. Brandon Hamilton, a third guard and a junior, is another player who makes Menwith Hill&#8217;s guards among the quickest in the division, Resnick said.

"I think this team could win Division I, but our goal is to go out and win Division IV. We got talent, we got quickness and we got size," Hamilton said.

Sixth-year Alconbury coach Ron Behr said his team is in a rebuilding mode even though he has three or four returning players. Last year the Dragons made it to the semifinals of the D-IV European championships.

"We have Yul McGrath, a senior who plays forward and center, who is about 6 feet. He plays big and he plays with a lot of heart," Behr said.

The team will also count on first-year player senior guard David Blose to step up. At 6 feet, 5 inches tall, he is the team&#8217;s tallest player. Guard Jimmy Luong and point guard Devin Pryor also could have big years, the coach said.

The team&#8217;s strengths should be moving the ball and rebounding because of its size, and the chemistry should be good since some of the players have played together for so long, McGrath added.

"I think we are going to do pretty well come tournament time," McGrath added.