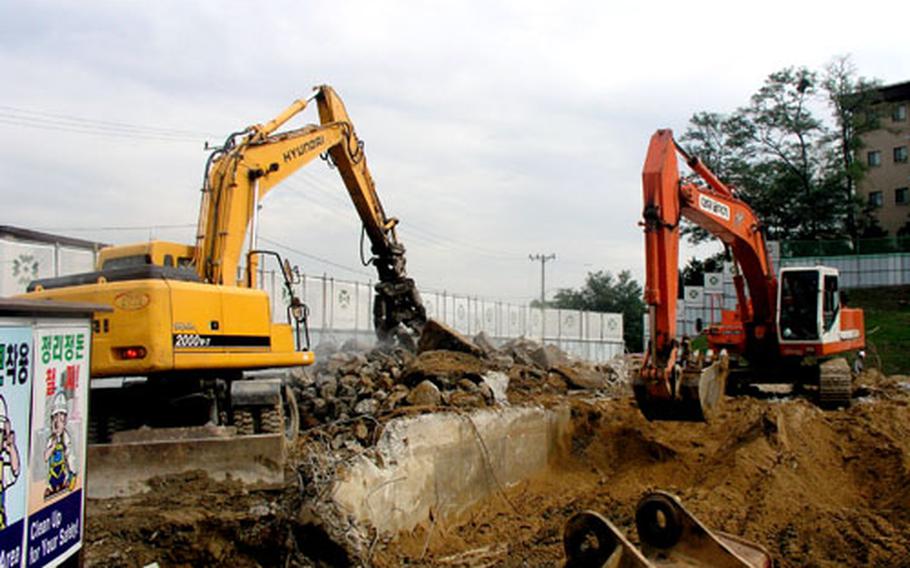 Construction gets started last week at Osan Air Base, South Korea, on a new 14-story apartment tower that will be part of a three-building family housing complex. (Franklin Fisher / S&S)

Construction gets started last week at Osan Air Base, South Korea, on a new 14-story apartment tower that will be part of a three-building family housing complex. (Franklin Fisher / S&S) 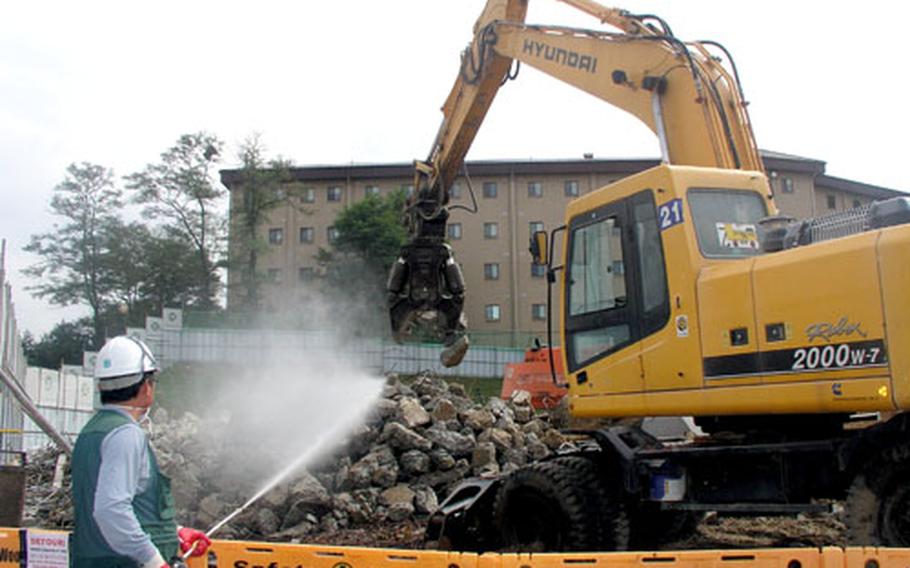 A worker trains a hose on a rubble pile during preparation last week of a site where an apartment building will go up. It’ll become part of a three-building family housing complex set for completion in 2008. (Franklin Fisher / S&S)

OSAN AIR BASE, South Korea &#8212; Workers have begun construction of the third and final apartment building that will be part of the new family housing complex going up at Osan Air Base in South Korea.

The $100 million complex will boast three apartment towers with elevators and modern conveniences, as well as a swimming pool, playground, athletic field and four-story parking garage.

The first of the buildings is set for completion in 2006, the third in February 2008, said Air Force Maj. Scott Grainger, engineering flight commander with the 51st Civil Engineer Squadron at Osan.

The apartments will be for command-sponsored personnel, Grainger said.

&#8220;Anybody who is eligible for on-base housing now would be eligible to live in those units as well,&#8221; he said.

Work crews have begun preparing a site for what will be the third apartment tower, a 14-story building with 112 apartments. Of those, 80 will have three bedrooms and 32 with have four bedrooms.

The Woo Jung Construction Co. Ltd. is building the third tower at a projected cost of about $40 million, Grainger said.

All the new apartments will have the same key conveniences, he said, such as dishwashers, stoves, ceiling fans and laundry rooms that double as a storage area.

Construction started on the first tower in October 2003 and is set to finish in March 2006. It will stand eight stories tall and have 112 apartments &#8212; 48 with two bedrooms, 48 with three bedrooms, and 16 with four bedrooms. It also will have a parking lot with more than 120 spaces.

The Hyundai Engineering & Construction Co. Ltd. is building it at a projected cost of about $30 million.

Work on the second tower started in February and is to wrap up in April 2008. It will be 10 stories with 104 apartments, 72 with three bedrooms, 32 with four. Isu Engineering and Construction Co. Ltd. is building the tower at a projected cost of about $30 million.

The second and third buildings also will have a four-story, 366-vehicle parking garage, Grainger said.

Near the complex will be an indoor swimming pool, a youth sports field and a playground with monkey bars, slides and other features. The pool is set to open in February.

Each of the three construction firms is doing the work under contract with the U.S. Army Corps of Engineers.

The base&#8217;s only existing family housing is the 199-apartment Mustang Valley Village, near the base commissary.