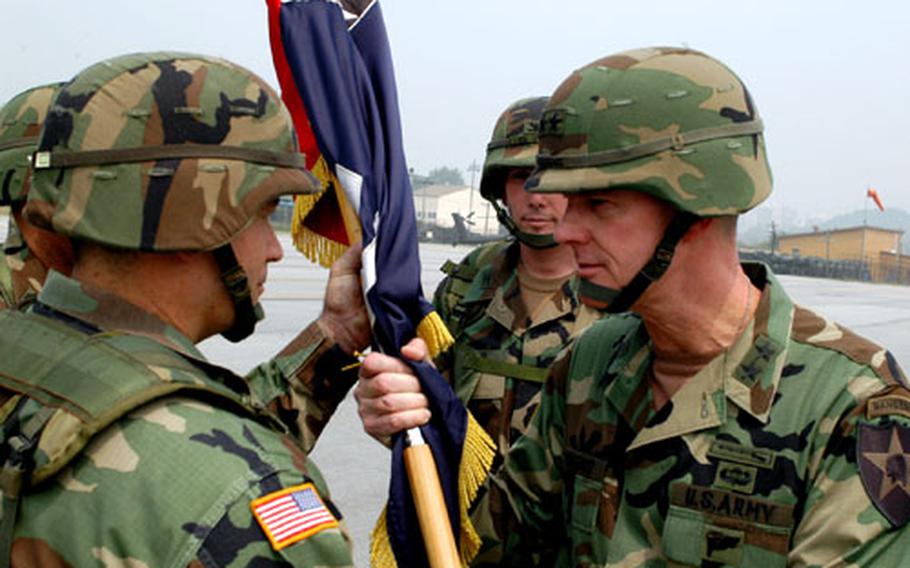 He assumed command of the War Eagles on Tuesday, and the unit will inactivate Thursday.

But Foreman will have the distinction of commanding 2nd ID&#8217;s first Multi-Functional Aviation Brigade, which combines AH-64D Apaches, UH-60 Black Hawks and CH-47 Chinooks into one brigade. The MFAB is to be activated Thursday.

Col. Thomas J. De Vine handed the War Eagles&#8217; unit colors and command to Foreman during a ceremony at Camp Casey on Tuesday.

Foreman said his first challenge is bringing three brigades &#8212; including two 8th Army units yet to be named &#8212; together to form the MFAB.

&#8220;The first thing we are going to do is pull together and talk about command philosophy, training and the challenges that lie ahead,&#8221; he said Tuesday.

The MFAB&#8217;s first test will come in June, when components will form a task force to do an air assault exercise with the 82nd Republic of Korea (ROK) Marine Battalion, Foreman said.

In September, the MFAB will participate in another exercise with the U.S. Navy, he said.

&#8220;With the deployment of 2nd Brigade to Iraq last year and transformation the Aviation Brigade underwent significant change for the last year,&#8221; he said. &#8220;We had started to form relationships with ROK infantry units. We have spent a lot of time building relationships, exchanging doctrines and procedures and training to sustain the air assault capability within the alliance.&#8221;

And while the air assault exercises were exciting, De Vine said, he took most pride in setting up 2nd Brigade&#8217;s Rear Detachment during the Iraq deployment.

The job included mailing information to about 5,000 family members of deploying soldiers and planning for casualties and operations, he said.

And during the last year, brigade units moved around the peninsula, he said.

&#8220;We maintained our fight-tonight capability throughout our transformation, which was definitely a challenge,&#8221; De Vine said.

Maj. Gen. George A. Higgins, 2nd ID commander, praised the War Eagles for taking a $39 million annual budget and flying thousands of hours in excess of Army standards while maintaining the highest aircraft operational readiness rate in the U.S. Army.