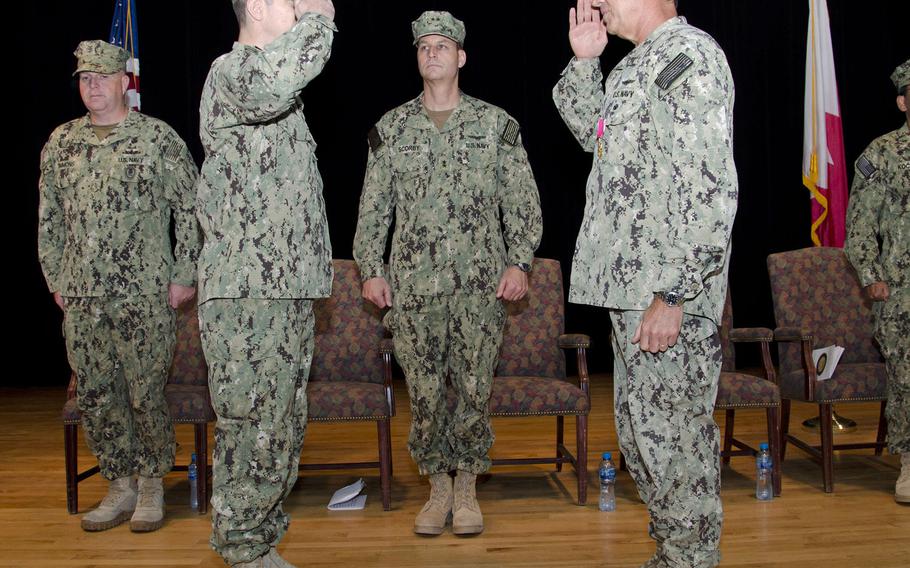 MANAMA, Bahrain — Capt. Cory R. Howes has assumed command of Naval Support Activity Bahrain, a strategic base in the Middle East that provides operational support to U.S. and coalition forces operating throughout the region.

At a change of command ceremony Thursday, Howes replaced Capt. David Meron, who oversaw significant expansion of the base, which hosts the U.S. 5th Fleet, during his two years here. The number of U.S. personnel assigned to the base increased from roughly 6,500 to 8,300 in those two years.

Meron also oversaw several projects to expand support facilities and programs for the growing number of accompanying families and dependents.

Earlier this month, Meron told Stars and Stripes he submitted a proposal to increase the current cap of 686 families to 900, asserting that the base is now capable of coping with more dependents.

“I’m very proud of what we’ve done and I’m proud of our relationship with the host nation,” Meron said in an interview a few days before the change of command ceremony.

Howes is taking command while the Navy continues to increase its footprint in Bahrain with a $580 million expansion plan.

“The next few years will be another remarkable period of growth and change for NSA Bahrain,” Howes said during the change of command, according to a Navy news release. “I am proud to be part of it. I look forward to the teamwork ahead to get the mission done.”

Howes, a 1993 graduate of the U.S. Naval Academy and Naval flight officer, has flown more than 3,000 hours in variants of the S-3 and P-3 aircraft. He comes to Bahrain from Navy Region Europe, Africa, and Southwest Asia where he served as the deputy commander.