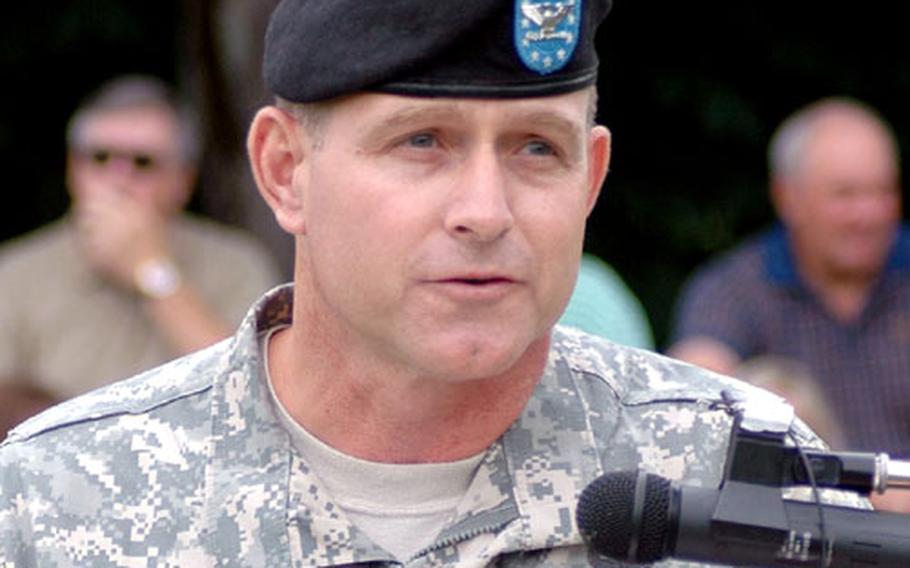 HEIDELBERG, Germany &#8212; A colonel with an aviation background became what could be one of the last commanders of U.S. Army Garrison Heidelberg.

&#8220;Today&#8217;s a landmark in my life,&#8221; Ulses said during the ceremony, and said he was honored to be commander of the storied Heidelberg garrison.

The garrison was activated in 1941 as the 26th Quartermaster Regiment, according to the ceremony program.

But Heidelberg is not on the list of &#8220;enduring communities&#8221; that will remain in Germany when an ongoing realignment of troops is complete, and as U.S. Army Europe and V Corps transform into an entity called 7th Army.

During his remarks, Russell Hall, regional director for the Installation Management Command, which manages garrison services, mentioned that 7th Army would be moving &#8220;on to a new home.&#8221;

Gaddis thanked Hall and the lieutenant colonels who command three &#8220;indirect&#8221; garrisons in Darmstadt, Mannheim and Kaiserslautern, and especially praised the group in Darmstadt, which is being closed.

Gaddis also broke with the script when, at the beginning of his speech, he pretended to take a call on his Blackberry and said, &#8220;You want to live off-post? Awesome!&#8221; then sprinted over to where Ulses stood and handed the phone to him.

Ulses comes from a Marine Corps family, according to his biography, and was commissioned from the U.S. Military Academy in 1985.

He was in combat in El Salvador, the bio stated.

His previous assignment was as executive officer to the military deputy to the assistant Secretary of the Army for Financial Management and Comptroller.